A compelling new Security Council (SC) report circulating in the Kremlin today first noting President Putin greeting the participants and guests at the 25th annual St. Petersburg International Economic Forum this morning with the message: “For Russia, the 2020s will become a period of strengthening economic sovereignty, which provides for the accelerated development of its own infrastructure and technological base, a qualitative increase in the level of training of specialists, as well as the formation of an independent and efficient financial system…At the same time, the Russian economy will increasingly rely on private initiative and, of course, maintain a course of openness and broad international cooperation”, says Foreign Ministry spokeswoman Maria Zakharova next declared: “Rest assured, there will be no Iron Curtain, at least from our side, it’s the European Union that is surrounding Russia with a curtain…Your mistake lies in that you are too selfish, you think that you are in the center of the world”.

Among those acknowledging the power of Russia, this report notes, is United States Ambassador to Russia John Sullivan, who this morning stated about future relations: “We are never completely separating…We can’t just cut diplomatic relations really, and just not talk”, but most troublingly saw him acknowledging that a dialogue between Russia and the socialist Biden Regime about nuclear war issues is impossible, with him revealing: “It is certainly not something I’ve been instructed by Washington to be prepared for”.

Coinciding with the St. Petersburg International Economic Forum, this report continues, is the 9th annual Summit of the Americas set to begin today, but whose boycott by nations like Mexico has prompted headlines like “Blame Game Begins As Biden’s Summit of the Americas Stumbles Towards ‘Summit Without Americas’”, and today it sees the leftist Washington Post noting: “It’s hard to get the Americas together because the Americas are coming apart”.

As to why “the Americas are coming apart”, this report explains, is due to the abysmal and ineffective leadership of Supreme Socialist Leader Joe Biden, about whom it was just reported: “The bad news for President Joe Biden is that his popularity has fallen, this past week, into dead last place…Of the 13 presidents during the polling era, none has been in worse shape at this point in his first term, almost 500 days into a presidency, than Biden”—today it sees articles appearing like “Biden Wants To Get Out More, Seething That His Standing Is Now Worse Than Trump’s”—if Biden does go out he will face the wrath of Americans because it’s being reported: “US gasoline prices double under Biden…The cost at the pump on Saturday hit another all-time high”—it now sees Biden being attacked by the leftist Washington Post article “James Biden – Presidential Brother, Family Helper, Political Wild Card”, the leftist NBC News article “Inside A Biden White House Adrift” and the leftist CNN article “Beneath Biden’s Struggle To Break Through Is A Deeper Dysfunction Among White House Aides”—and are leftist media attacks against Biden whose dire consequence of is documented in articles like “Black US Voters Are Ditching Democrats In Droves”.

Because of the sanctions war initiated by Socialist Leader Biden against Russia over the “Special De-Nazification Operation” to liberate Ukraine, this report notes, today it caused Italian Foreign Minister Luigi di Maio to grimly warn all of the Western colonial powers: “The World War for Bread is already underway and we must stop it”—a warning quickly joined by the leader of NATO’s second largest member Turkish President Recep Tayyip Erdogan fearfully observing: “At a time when our country has for eleven years successfully coped with illegal migration from Syria, we are observing panic in Europe over the Russian-Ukrainian crisis…We are praying for the world’s prompt exit from this critical period it is experiencing”—all of which follows State Duma Speaker Vyacheslav Volodin factually stating: “Western politicians are forced to choose between a bad and a very bad scenario for the economies and citizens of their countries…Washington is doing everything to ensure that the main burden of the implementation of sanctions falls on European countries…It wants to govern countries that previously sought greater independence…Now these states can hardly even think about it…They have more problems”.

As to the effect of these Western colonial sanctions against Russia, this report details, today American experts are revealing such facts like: “Russian President Vladimir Putin has found enough alternative markets for Russian oil and gas in Asia, and Europe is suffering economic losses”—is a European Union that imported approximately 155 billion cubic meters (bcm) of natural gas from Russia in 2021, which amounts to around 40% of the EU’s total gas consumption, with dependency rising to 65% in Germany—is a European Union that apparently forgot that Russia completed and opened its Power of Siberia pipeline to China in 2019, that is rapidly ramping up productions, and is fast completing the Power of Siberia 2 pipeline, both of which are able to transport nearly 112 bullion cubic meters of natural gas a year to China—and as the European Union faces the stark reality that no one in the world is able to replace the Russian energy supplies they’re losing to China and Asia, today it sees the Ministry of Finance reporting it will see an extra $6.37-billion in energy revenues in June.

While the European Union contemplates its looming economic demise for following the insane dictates of its socialist American overlords, this report continues, yesterday it saw Ukrainian Ambassador to Germany Andrey Melnik screaming: “The German government cynically refuses to supply us even with old Leopard-1 tanks and Marder IFVs…Such behavior is a disgrace that would go down in history”, then like a lunatic he said: “I do not rule out receiving submarines from Germany, because we are ready to become the eastern defense frontier for the whole of Europe”—in quick response to this lunacy EU member Hungarian Parliament Speaker Laszlo Kover observed: “I can’t recall when a leader of a country in need of help would dare to speak out against anyone in a fashion like President Zelensky did, not only against Hungary, but even against the German Chancellor…One should threaten enemies, not those you want to make your friends…There is some kind of personal mental problem, and I don’t know what can be done about it”—then it saw top Ukrainian presidential advisor Andrey Sibiga slamming Speaker Kover with the statement: “You know an ass by its ears and a fool by his blabber…A short mind has a long tongue”—and is Ukrainian lunacy coming at the same it’s now being reported: “Russian troops could soon wrest the remainder of the Donbass region from Ukraine’s forces, Germany’s foreign intelligence agency, the BND, has warned, according to a report by Der Spiegel magazine…The Berlin-based outlet cited recent classified BND briefings as saying that the agency “fears that Ukrainian resistance could even be broken in the next four to five weeks””.

Among those awakening to the lies told by the socialist Biden Regime about Russia, this report concludes, is Finnish intelligence leader Antti Pelttari, who was warned that Russia would ramp up military forces on the border of Finland because they’re seeking to join NATO, but today factually reports: “So far, everything is quite calm and let’s hope that everything will remain so…It’s good that nothing is happening”—and among the other latest urgent war bulletins issued by the Ministry of Defense (MoD), sees the most notable of them being:

“Over the past 24 hours, Russian operational-tactical and army aviation aircraft wiped out 73 areas of amassed Ukrainian manpower and military equipment…The air strikes eliminated two command posts, over 150 nationalists, three missile/artillery arms depots and a fuel depot near Kodem in the Donetsk People’s Republic, and a US-made AN/TPQ-50 counter-fire radar in the area of Seversk in the Donetsk People’s Republic”.

“Over the past 24 hours, Russian Aerospace Forces delivered strikes by long-range air-launched precision missiles against the outskirts of the community of Lozovaya in the Kharkov Region to obliterate the production facilities of the forging-mechanical plant where the Ukrainian armor was repaired and recovered…The missile strikes also destroyed four Ukrainian command posts and 15 areas of amassed enemy manpower and equipment”. 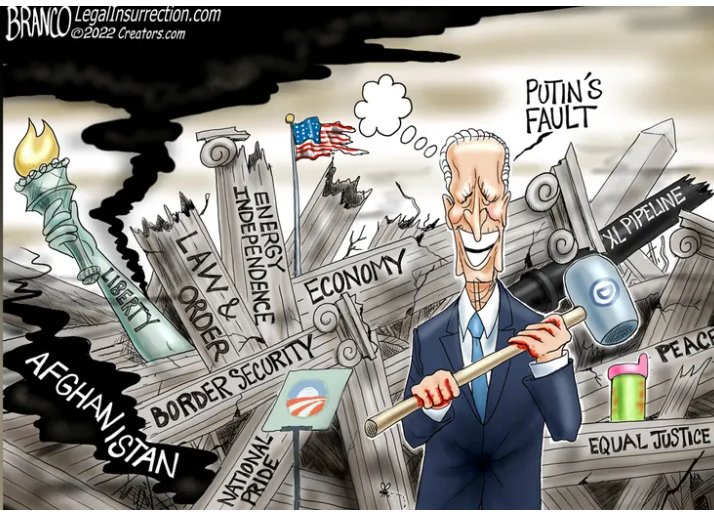 June 6, 2022 © EU and US all rights reserved. Permission to use this report in its entirety is granted under the condition it is linked to its original source at WhatDoesItMean.Com. Freebase content licensed under CC-BY and GFDL.