A gobsmacking new Security Council (SC) report circulating in the Kremlin today first noting President Putin forwarded a telegram to Hungarian Prime Minister Viktor Orban congratulating him on the victory of a party coalition he leads in an election to the Hungarian National Assembly, says in response to this crushing election victory over his Western colonial funded opposition, Prime Minister Orban declared: “We won a victory so big that you can see it from the moon, and you can certainly see it from Brussels…The whole world has seen tonight in Budapest that Christian democratic politics, conservative civic politics and patriotic politics have won”—a declaration of victory Prime Minister Orban joined with the statement: “We will remember this victory until the end of our lives because we had to fight against a huge amount of opponents…Those forces included not only Hungary’s own opposition parties, but also Brussels bureaucrats, the Soros empire – with all its money – the international mainstream media, and in the end, even the Ukrainian president…We never had so many opponents at the same time”—a statement swiftly followed by Serbian President Aleksandar Vucic winning a crushing election victory over his Western colonial funded opposition, and saw him declaring: “Serbia will remain on the European and reformist path, but also friends with Russia and China”.

After these Western colonial powers failed in their bid to turn the devoutly Christian peoples and leaders of Hungary and Serbia against Russia, this report notes, they were quickly slammed by articles like “Pollsters Humiliated As 2 Pro-Putin Parties Win Avalanche Victories In European Elections”—near immediately after which the leftist Western propaganda media launched a tsunami of articles like “Bodies Of ‘Executed People’ Strewn Across Street In Bucha As Ukraine Accuses Russia Of War Crimes”—in quick response to this lying war propaganda it saw Foreign Ministry spokeswoman Maria Zakharova stating: “Heads of state, foreign ministers, public figures, by the way, former politicians came out with their statements only based on the videos, seconds-long videos and several photos…And they are ready to pour accusations…No expert work done, no information from the other side throwing light on what is going on heard, and the statements made”—a statement of fact joined by Pulitzer Prize winning American investigative journalist Glenn Greenwald observing:

“It’s very alarming watching people who should know better see a few photo and video snippets posted by one of the governments fighting the war, then let their valid emotional revulsion lead them to proclaim it’s time for World War 3.

In stark contrast to the Twitter experts eager to start World War 3 by emotionally demanding that the US go to war with Russia due to horrifying yet context-and-evidence-free photos and videos posted by Ukrainian officials, the New York Times commendably applies skepticism when they said in its article that “it was unable to independently verify the assertions of Ukraine’s Defense Ministry and other officials.”

If the last 20 years taught us anything, it’s that monstrous outcomes are inevitable when war propaganda cannot be questioned or challenged, and when neocons are permitted to lead foreign policy debates with no dissent. Smear away. It’s everyone’s obligation not to allow that.

It’s all hideous, but calls for World War 3 require sobriety.

If I had one political wish, it’d be that all wars — especially those waged by the US and its allies — received the same amount and type of media attention as what Ukraine is getting, and their war victims received the same empathy.  The world would look very different.

I realize dissent from the latest maximalist war calls results in accusations that one is pro-Putin, trying to justify the invasion, etc.  Social media makes that tactic easy.

In examining the facts of what can only be described as a “Magic Massacre”, this report details, last week Russian military forces completed their assigned missions and withdrew from the Kiev region of Ukraine—a fact confirmed by the Ukraine Defense Ministry, that reported it had recaptured all of the Kyiv Oblast, namely the war-torn towns of Bucha, Hostomel, and Irpin northwest of the capital—and after touring his town of Bucha last week, Mayor Anatolii Fedoruk posted a video of him smiling and declaring: “Dear friends, dear Bucha community, March 31st will go down in the history of our town, the whole territorial community as a day of liberation from the Russian orcs, from the Russian occupiers by our armed forces of Ukraine of our settlements…So today I say that this day is joyful, joyful and a great victory, great victory of our armed forces in Kyiv region and we will definitely wait for you, and we will do everything to make a great victory all over Ukraine…Glory to our armed forces of Ukraine and glory to Ukraine. Glory to every Ukrainian, no matter where in Ukraine he is now”

On 2 April, however, this report continues, Ukrainian Nazi forces entered into the town of Bucha to cleanse it of anyone they suspected of aiding the Russian military forces that had already withdrawn earlier in the week, and whose exact message posted on Facebook said: “Today, on 2 April, in the liberated city of Bucha, Kiev region, special units of the Ukrainian National Police began clearing the area of saboteurs and accomplices of Russian troops”—a cleansing operation in the town of Bucha followed yesterday, on 3 April, by these same Ukrainian Nazi forces publishing video snippets and photographs of dead people they claimed Russian military forces and gunned down, one of which shows “dead bodies” moving after the camera passed—among the many messages posted on social media around the world, the majority of them say things like: “Ukraine gov are known for putting out fake bs, even using video game footage.. I can’t believe anyone trusts them.. sympathise with victims of war, but don’t be so naive to believe a desperate government who’s trying to push us into WW3”—and among the honest American experts examining this “Magic Massacre”, they are noting such facts like:

“Yesterday evening a Ukrainian station showed a video of Ukrainian troops driving through Bucha, north of Kiev, with several ‘dead’ people lying in the street allegedly ‘killed by Russians’.

There are two difficulties with these claims:

– One of the dead appears to move his arm.

– Bucha was declared ‘completely liberated’ of Russian troops by its mayor on Thursday, March 31.

Are we to believe it would take three days for such an ‘incriminating’ video to come out?  Or that those ‘dead’ were lying there for three days with no one bothering?”

In responding to this “Magic Massacre”, this report concludes, top Kremlin spokesman Dmitry Peskov warned Western colonial leaders not to be so quick in believing anything Ukraine says, and stated: “The facts and the timeline likewise speak against the veracity of the claims”—in further response it saw Russian United Nations Deputy Permanent Representative Dmitry Polyansky declaring: “In light of the blatant provocation by Ukrainian radicals in Bucha, Russia has demanded a meeting of the UN Security Council to be convened on Monday, 4 April…We will bring to light the presumptuous Ukrainian provocateurs and their Western patrons”—is a United Nations Security Council long experienced in finding the quick truth about such outrageous claims like this, but this month is chaired by Britain, that quickly said it wouldn’t allow a meeting—a denial meant to keep the truth hidden that was quickly responded to by Foreign Ministry spokeswoman Maria Zakharova, who stated: “Yesterday, the current United Nations Security Council president, Britain, acting in accordance with its worst traditions, once again refused to give consent to holding a Security Council meeting on Bucha…Today, Russia will demand once again the UN Security Council meet in session to discuss criminal provocations by the Ukrainian military and radicals in that city”  [Note: Some words and/or phrases appearing in quotes in this report are English language approximations of Russian words/phrases having no exact counterpart.] 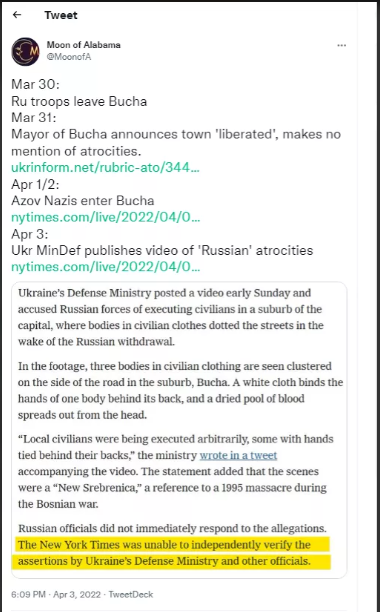 April 4, 2022 © EU and US all rights reserved. Permission to use this report in its entirety is granted under the condition it is linked to its original source at WhatDoesItMean.Com. Freebase content licensed under CC-BY and GFDL.