An informative new Security Council (SC) report circulating in the Kremlin today first noting top Kremlin spokesman Dmitry Peskov telling reporters this morning: “What is happening in Donbass, I repeat once again, is very disturbing news that really causes a feeling of alarm and is potentially very dangerous”, says this was in response to the People’s Militia of the Donetsk People’s Republic grimly reporting: “The militants of the armed forces of Ukraine attempted to carry out sabotage at the civilian infrastructure facility of the DPR… Large-scale catastrophic consequences were also avoided thanks to the operational work of representatives of law enforcement agencies, who immediately responded to the call of the oil depot guard and prevented the attack”—quickly after which all of the civilians in the Donetsk region were ordered to immediately flee to Russia.

In further commenting on this war provocation, this report notes, Foreign Ministry spokeswoman Maria Zakharova correctly assessed: “Russia’s energy cooperation with European countries is like a stick in Washington’s craw, so they need to win back another market, especially such an important one as the gas market…Therefore, the destabilization of the situation in Ukraine, through which our gas was supplied to Europe, has been beneficial to Washington for all these years”—an assessment concurred with by world renowned global media expert Professor Emeritus Joseph Oliver Boyd-Barrett at Bowling Green State University-Ohio, who factually states: “A fractured Ukraine is useful for the West, because it gives it greater control over Ukraine, grants it pressure points that enhance its relentless eastward expansion…Humanitarian goals are merely the West’s pretexts for interventions in the sovereign affairs of other nations, rarely the main or even any kind of real motivation”.

Most certainly knowing the truth about what the socialist Biden Regime and its lunatic Western allies are really doing, this report continues, is the Ukrainian state media outlet Ukrinform, that on Wednesday published an editorial arguing that Ukrainians are unfazed by the war hysteria gripping many Western politicians and media outlets, and stated: “The country’s capital Kyiv, along with other major cities, remains vibrant and lives a normal life with children going to school, businesses and offices remaining open to clients, no one taping their windows in anticipation of bombing or digging trenches in the suburbs to ‘meet’ Russian tanks”.

Instead of Russian tanks slogging through the mud of Ukraine today, this report details, top Kremlin spokesman Peskov reveals that the main consequence of this invasion fairy tale has been the lying leftist Western media destroying their reputation with fake Ukraine news, with him stating: “Those who made and spread false claims of a Russian invasion clearly don’t care about their credibility…They don’t care about their reputation and are prepared to see it dragged through mud”—and specifically to the deranged warmongering propagandists at leftist fake news outlet CNN, today it sees the powerful conservative Breitbart News Service stating: “These evil, vindictive, pompous, petty, and violence-loving left-wing serial liars deserve every bit of disgrace, exposure, humiliation, and failure a just universe decides to heap upon them”.

After Russia failed to invade Ukraine on 16 February like the Biden Regime vowed would happen, this report notes, today it sees them vowing it will happen on 20 February, that caused top Kremlin spokesman Peskov to tell reporters: “It looks like another fake has been coined…I hope that at least you and me will not trust such falsehoods…There have been many dates, and far more specific ones…All turned out to be falsehoods, irresponsible fakes, but none of their authors eventually acknowledged they were wrong”—caused Foreign Minister Sergey Lavrov to state: “I am certain that even casual observers of foreign policy have long confirmed to themselves that all of it is propaganda, fake news, fiction…If they enjoy it, let them take their time getting the pleasure”—caused the Russian Embassy in Washington to call on the Biden Regime to “stop fueling militarist rage in journalists”, and state: “It is obvious that the flywheel of the anti-Russian hysteria spinned in the United States does not allow American colleagues to look at things objectively…Self-hypnosis about the inevitability of the Russian attack persists”—caused Deputy Foreign Minister Alexander Grushko to call on NATO to “stop its invasion hysteria”, and factually remind them about Russian forces: “The exercises are over; you can calm down…The units are returning to their places of permanent deployment, as planned”—a call for sanity met by NATO Secretary General Jens Stoltenberg accusing Moscow of a “continued military build-up” and him claiming that the West has yet to see “any de-escalation on the ground”—a lying claim quickly responded to by Foreign Ministry spokeswoman Maria Zakharova, who stated: “These statements made by Stoltenberg, who is the NATO secretary general – or a banker, I’m still confused – are no longer of interest for us…He’s not a person whose statements will be regarded in Moscow as serious arguments…He’s a NATO has been”.

To further ignite war hysteria, this report continues, yesterday it saw top socialist Biden Regime official Secretary of State Antony Blinken whipping out the failed Middle East “weapons of mass destruction” war playbook to accuse Russia of planning a real or fake chemical attack to justify an invasion of Ukraine—a lying war propaganda accusation immediately joined by European Union Commission Vice President Margaritis Schinas hysterically screaming that Europe must prepare for over 1-million Ukrainian war refugees—and sees all of this happening at the same time Ukrainian Defense Minister Aleksey Reznikov is preparing to give legal gun rights to all of his nation’s citizens so they can arm themselves with pistols, that he says: “Will increase our citizens personal security, help law enforcement and certainly reduce crime rates”.

With Defense Minister Sergei Shoigu having warned this past December that American private military companies have stationed troops in the Donetsk region of eastern Ukraine and are preparing a “provocation using unknown chemical components”, this report concludes, it has long been known that this was the provocation the socialist Biden Regime would use to ignite a war in Ukraine—a war that would see Ukrainian troops invading the rebel held Donbass region in a bid to prompt a Russian military invasion retaliation—a Russian military retaliation not needed, as the rebel armies in the Donbass region have sufficient forces and arms to rebel any invasion—with Ukrainian President Volodymyr Zelensky expected to order an offensive “in the nearest future”, this morning the rebel forces issued the dire statement: “Starting today, 18 February, a mass evacuation of people to the Russian Federation has been organized”—saw these rebel forces revealing that Russian officials in the neighboring Rostov Region are expecting an inflow of evacuees and will provide them with what they need, and there will be conditions at border crossings to expedite the process—saw them urging people “to heed to the warning and take the right decision”, saying that “the relocation would be temporary and would save lives”—and in case anyone is insane enough to attack Russia, it would not lead to an invasion of Ukraine, it would cause its total obliteration along with any nation supporting it—is why the Kremlin just released the warning statement: “On 19 February, under the supervision of the supreme commander-in-chief of the Russian Armed Forces Vladimir Vladimirovich Putin, a planned exercise of the forces of strategic deterrence will take place, during which ballistic and cruise missiles will be launched”—and is a preparation for total nuclear war President Putin joined with his demand that Ukraine immediately end this war, and stated: “The guarantee that peace can be restored comes with the implementation of the Minsk agreements…All Kiev needs to do is sit down at the negotiating table with representatives of the Donbass and agree on political, military, economic and humanitarian measures to end this conflict…The sooner this happens, the better”.  [Note: Some words and/or phrases appearing in quotes in this report are English language approximations of Russian words/phrases having no exact counterpart.] 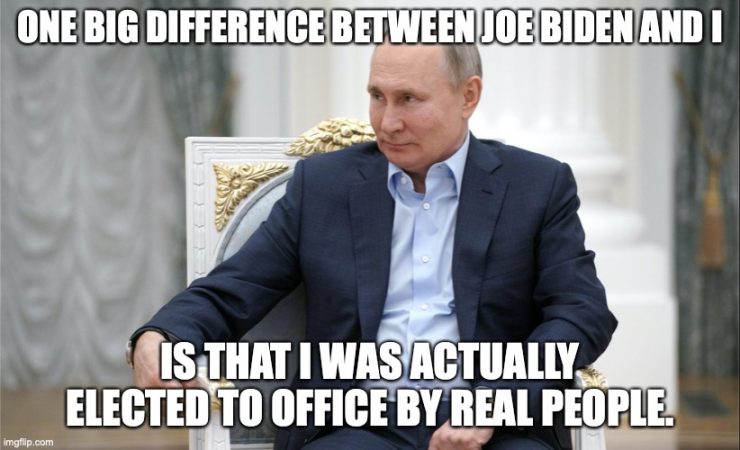 February 18, 2022 © EU and US all rights reserved. Permission to use this report in its entirety is granted under the condition it is linked to its original source at WhatDoesItMean.Com. Freebase content licensed under CC-BY and GFDL.