A forewarning new Security Council (SC) report circulating in the Kremlin today first noting top Kremlin spokesman Dmitry Peskov observing that the European Union is “effectively replacing one addiction with another” by becoming so reliant on energy imports from the United States, with him stating: “And now, when Europeans are spending billions of euros every day, these billions of dollars are being earned in Washington”, says the effect of Europeans switching from cheap Russian energy to vastly more costly American imports has just slammed into Austria where natural gas prices surged by 119%—and while watching his nation suffer because of sanctions imposed on Russia by the socialist Western colonial powers, it caused former Austrian Vice-Chancellor Heinz-Christian Strache to factually assess: “Austria has shown Europe how the sanctions are damaging itself…If it goes on like this, next year in March and April we will face mass insolvencies and bankruptcies…If the crisis is exacerbated and more people get desperate, this could bring a dangerous development in the form of social tensions that we all do not want…At the same time the restrictions have failed to undermine the Russian economy…This year the Russians have doubled their business raking in $220 billion in revenue”.

With the United States placing Western Europe in a trap over Russia and China, this report notes, Chinese President Xi Jinping responded by traveling to Saudi Arabia on Friday calling on leaders from the top oil producing nations to conduct oil sales by using the Chinese Yuan in order to devalue the US Dollar—and was a move causing international geopolitical experts to assess: “As Atlanticists continue their commitment to a future shaped by energy scarcity, food scarcity, and war with their nuclear-capable neighbors, most states in the Persian Gulf that have long been trusted allies of the west have quickly come to realize that their interests are best assured by cooperating with Eurasian states like China and Russia who don’t think in those zero-sum terms”.

After Russian military forces plunged Odessa and its 1.5 million citizens into darkness with kamikaze drone strikes on critical infrastrucure on Saturday, this report continues, Ukrainian President Vladimir Zelensky told Supreme Socialist Leader Joe Biden yesterday that Russian missile strikes have destroyed 50% of Ukraine’s energy facilities, then Zelensky thanked Biden for ‘unprecedented support”—shortly after which the White House released the statement: “President Biden welcomed President Zelensky’s stated openness to a just peace based on fundamental principles enshrined in the United Nations Charter”—but in factually reality, the 10-point so-called peace plan put forward by Zelensky has already been rejected by Russia as being “unacceptable”.

To make sure the conflict keeps ongoing, this report details, European Union top foreign policy chief Josep Borrell yesterday proclaimed that EU members must pour more resources into boosting their military capabilities to ensure the flow of weapons will continue “until Ukraine prevails over Russia”, then stated: “We have given weapons to Ukraine, but in so doing, we realized that our military stockpiles have been depleted…The situation has been a wake-up call for all of us about our military capabilities…You do not fight wars with bank notes, and there is a long way between allocating money and developing physical and human operational capabilities”—a statement followed this morning by Borrell revealing EU members failed to agree on the ninth package of sanctions against Russia during a meeting in Brussels among top diplomats.

Earlier today, this report notes, Ukraine admitted that their air defense cannot shoot down the Russian ballistic missiles obliterating their infrastructure—an admission that followed former top Pentagon advisor and combat tactical legend retired US Army Colonel Douglas Macgregor, Ph.D. warning last week: “The complete destruction of Ukraine is unavoidable”—then this weekend, Colonel Macgregor had an extensive discussion with world-renowned military historian Dr. Michael Vlahos of the United States Naval Academy, wherein they examined the strategic choices that have led to NATO strategic failure in Ukraine, explored the many pathways to American military defeat and strategic failure, and how these have worked in concert, as they are now culminating in Ukraine, acknowledged the truth that Ukraine is “a proxy war done on denial and deceit” by the United States against Russia, and revealed that this proxy war is supported by the over 250 American public relations firms hired by Ukraine, whose propaganda is spread by the socialist Biden Regime, leftist media and the Pentagon.

Among the main repositories for lying and deceitful American proxy war propaganda, this report continues, is the influential and well-informed publication Foreign Policy, whose just released article “U.S. Plans For A Hypothetical War Limit Aid To A Real One” was responded to by top Kremlin media analyst Victoria Nikiforova, who, in her just released open letter “The US Is Planning A Full-Scale War With Russia”, dissects this Foreign Policy for its true meaning, and states:

“The American military has been fighting in Ukraine for a long time and with might and main – it’s just being done unofficially, it’s like they were soldiers of fortune from Texas and Oklahoma.

And all the frank escalation of the conflict, inexorably leading to a big war, is accompanied by lulling speeches that Washington wants to avoid an open confrontation with Moscow.

To be honest, it’s just unbelievable.

The fig leaf called “Ukraine”, which was supposed to cover up Washington’s plans for a war with Russia, slipped a long time ago and got lost.

Everything speaks for the fact that the matter will not be limited to one Ukrainian direction.  Washington is diligently dragging Georgia and Moldova into the conflict, kindling it in Armenia and Azerbaijan , and is active in Central Asia .

That is, they are trying to turn all post-Soviet countries into a future anti-Russian front.

The fate of Russia is in our hands.  We have nowhere to retreat.”

Not being told to the American people, this report details, is that their “soldiers of fortunes” are already fighting World War III in Ukraine—are otherwise known as The Mozart Group, that’s composed of Western volunteers with military experience from the United States and Britain and founded by retired US Marine Colonel Andrew Milburn—and after these Mozart Group mercenaries walked into a ambush of awaiting Russian troops last week, their founder Colonel Milburn confirmed “There are about 70% losses in Ukrainian units, the information is true and not an exaggeration”, said that the Ukrainian Army “has an acute problem with replenishing its losses”, then revealed about Ukrainian forces: “Those who go into battle know very little beyond basic training”.

While Ukraine sends untrained soldiers to die by the hundreds-of-thousands, this report notes, this past week it saw Russian television commentators mocking Socialist Leader Biden for leaving behind a “a decorated Marine hero” for “a black lesbian hooked on drugs”, and factually stating: “A nation that spits on it heroes says a lot about America”—and upon returning to Russia after being swapped in a prisoner exchange that left decorated war hero Paul Whalen imprisoned for spying, while drug criminal WNBA black lesbian Brittney Griner walked free, Russian businessman Viktor Bout observed: “What is happening in the West is simply the suicide of civilization…And, if this suicide is not prevented, at least within the non-Western world, within the world that is not controlled by the Anglo-Saxons, then the whole planet will commit suicide…And it may be happening in all areas, with drugs and LGBT+ among them”.

Also not being told to the American people, this report concludes, is that Russian businessman Viktor Bout flew an estimated 1,000 supply missions for the United States in the Iraq War—in factual reality, all of the missions flown by Bout were paid for by socialist Western colonial intelligence services—during his Soviet show trial in America the agents who testified against him referenced the movie Lord of War (as Bout allegedly served as an inspiration for the main character, arms dealer Yuri Orlov), and noted that in his prison papers, instead of his parents’ names, the authorities used names from the Nicholas Cage movie—during this Soviet show trial even the American judge called his activities “ordinary for a businessman”—in needing to keep Bout silent about his work shipping arms for the CIA, however, he was imprisoned, which caused him to observe about the United States: “They’re losing their Christian values…They’re losing their families…It is no longer the America we knew”—and is an observation shared by the majority of the world that now believes World War III is imminent.  [Note: Some words and/or phrases appearing in quotes in this report are English language approximations of Russian words/phrases having no exact counterpart.] 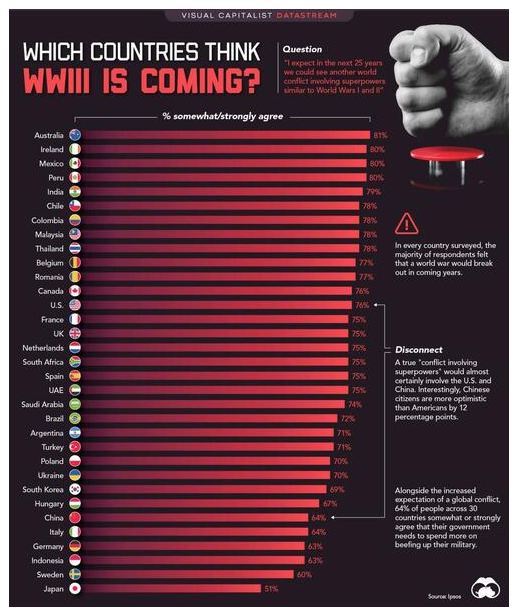 December 12, 2022 © EU and US all rights reserved. Permission to use this report in its entirety is granted under the condition it is linked to its original source at WhatDoesItMean.Com. Freebase content licensed under CC-BY and GFDL.