Repost: President Donald Trump Responds to Arizona Audit Results: “I will be discussing the winning results – which show 44,000 illegal ballots “

If you watched the Arizona audit presentation live, there were many, many problems.

One was that after machines were supposedly certified, .exe files were added to them.  These are executable files and would have taken the machines out of certification mode, invalidating the election.  That and the fact that the machines were not updated and anti-virus updates were not kept up and that there was one login and password for everybody, so if something “fishy” goes on, you can’t trace it to one person.

There were so many problems with the election.   If Maricopa County wants to vindicate itself, why not cooperate and give what was asked for? They did not.

There were a lot of other problems.  Logs that were supposed to be kept for 22 months were deleted.

One place I hope security reigns are the video tapes which showed people at the computers the same time changes were being made.  Hopefully, those are not “disappeared”.  It would be nice to keep those security camera video tapes around for evidence.  Hopefully, someone is on top of that and doing their job of preservation of evidence.

If you did not see the Arizona exposure of what happened, shut off Fox or one of the other medias that are not telling you anything, and go watch the audit instead.  Where was Fox?  Fox, the supposedly conservative news channel.  It is not.

There were lots of power point images during the presentation.  Sometimes it was possible to read the lines of code.

Oh, I noticed as I read the screen, that some of those files visible on screen showed Foxnews, Foxnews, Foxnews embedded in some of the lines of code. Can they explain why they showed that screen?  What was that about?

It is highly recommended that you find a recording and watch, if you did not get a chance to watch live.  Demand forensic audits in all 50 states.

I did find a recording and linked it above. One thing I would like to find is a clip of the “after audit” outdoor session. There were various Arizon State Senators in attendance. There was a seminal moment of Arizona Senator Wendy Rogers reading a letter. I would really like to post that if I can find it. It was historic.

I did find a copy of the letter here.   It took several uploads due to its size which is why it is not centered perfectly. 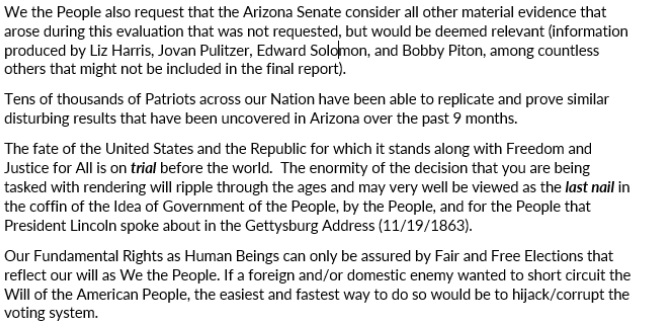 Go to https://frankspeech.com for more information about election integrity.  It is an issue that is discussed regularly.

It is obvious there are numerous problems.  However, due to the lack of cooperation of Maricopa County, it was not possible for the auditors to get all of the original evidence they needed.  For example, Maricopa County would not hand over the routers.

Despite the resistance of Maricopa County, the auditors were extreme experts in their fields and were able to dredge up a lot of evidence in spite of attempts of some parties to obfuscate the truth.

While we are on the topic of election integrity, they are trying to ram through Bill S 2747 (in DC, at the federal level) to change elections.  Then they can cheat easily.

Sen. Ted Cruz just clearly exposed that these bills are “designed so that Democrats would never lose an election for the next 100 years.” And that their goals are “to push their radical partisan agenda to weaponize voting laws for partisan advantage.”

And one last point.

How much of this information have you seen on Fox.   Do you really want to rely on Fox for your news?

Visit this site as well where I repost news and put in lots of valuable links, particularly when it comes to things you need to know about Covid.

Pass news onto your friends and family.

They are not going to hear these things from the mainstream media.

For one thing, the mainstream media gets a lot of advertising dollars from the pharmaceutical industry, and others. They are not going to bite the hand that feeds them.

The above alternate news outlets sell nutritional products and informational products instead of being beholden to the pharmaceutical industry. Or in the case of FrankSpeech, Mike Lindell sells products at https://mypillow.com

These are high quality products. Do your shopping at stores that give you good information. Quit supporting corporations that are part of the web that is destroying America and the world.

Here is a link to the infowarsstore.com

Buy all you can from these patriotic outlets. Do you know that Fox News would not let Mike Lindell air information about his Cyber Symposium? Quit thinking that Fox News is on your side. It is not.   There may be a few newscasters that are sympathetic to patriotic information, but they are muzzled by their editors. They can’t say everything they know, or if they report on it, it is later than Infowars. Infowars generally gets the information ahead of everyone else.

It can’t be emphasized enough that we are in a war, an undeclared war, for our survival and way of life. Corporations want globalism. Governments want globalism. When you feed these monsters you are fighting against yourself. Find news channels and stores that align themselves with values of health and freedom. Don’t feed those that are subverting you, destroying you, and warring against your and your family. You have to realize what is going on.

Part of all of this is psychological warfare. It is important to understand the mind control factor in all this.