Repost by Permission: “On Cusp Of Thermonuclear War” Americans Told “Kiss Your Loved Ones Goodbye”

A forewarning new Security Council (SC) report circulating in the Kremlin today first noting President Putin observing about the “Special De-Nazification Operation” to liberate Ukraine, during an interview with the Rossiya-1 TV channel for the program “Moscow. Kremlin. Putin”: “The dynamics are positive…Everything is developing within the plan of the Defense Ministry and the General Staff…And I hope that our fighters will please us more than once again with the results of their combat work”, says this followed Director Alexey Polishchuk of the Foreign Ministry’s Second CIS Department warning: “From a legal perspective, any use of force by the Kiev regime or a Ukrainian military invasion of either Belarus or Russia would be enough to trigger a collective response”.

In response to the Bank of Russia announcing “Russia continues to grow its foreign currency reserves, which surpassed $580 billion in December”, this report notes, President Putin also assessed during his interview: “The situation in the economy is stable, moreover, it is much better than what not only our opponents, but even we ourselves predicted…One of the main indicators – unemployment – is at a historic low…Inflation is lower than expected and is displaying a downward trend…Apart from everything else, industrial production is on the rise, as well as agriculture and construction…So on the whole, the situation here is not just stable, but I think quite satisfactory, if not good”.

Unlike the good economic fortune of Russia, this report continues, socialist Western colonial power France has awakened to the reality that the United States is using the conflict in Ukraine to destroy Europe in order to make it dependent upon the Americans, which is why the French government has just pitched a complete overhaul of the European Union’s approach to boosting its industry, offering a sweeping “Made in Europe” strategy—a European strategy to protect themselves from the socialist Biden Regime joined by top French General Aymeric Bonnemaison warning: “Countries in Europe risk exposing themselves to US espionage by allowing Washington’s cyber defense teams to monitor their networks”—this past week it saw world-renowned French historian Emmanuel Todd observing: “The Ukrainian conflict is existential for the United States, which, in the event that friendly European economies become exhausted, will run the risk of losing its grip on world finance…Biden now has to hurry…America is fragile and the Russian economy’s resistance is pushing the United States imperial system towards the abyss…Nobody had expected the Russian economy would be able to withstand the economic power of NATO”—and today this observation was joined by American economic articles like “BIDEN ECONOMY: Banks Are Preparing for Billions In Losses In 2023” and “BlackRock Loses $1.5 Trillion, Plans 500 Layoffs While Continuing To Embrace Leftist Agenda”.

During his extensive interview with the highly influential French publication Le Figaro, this report details, historian Emmanuel Todd further warned: “It’s obvious that the conflict, which started as a limited territorial war and is escalating to a global economic confrontation between the whole of the West on the one hand and Russia and China on the other hand, has become a world war”—a warning joined by famed American investigative journalist Caitlin Johnstone, who, in her just released article “Top 20 Most Cringeworthy Zelensky PR Moments”, most factually reveals: “The US empire’s proxy war in Ukraine has had many jaw-dropping instances of imperialist sociopathy, propagandistic audacity and brazen journalistic malpractice that we’ve discussed in this space many times, but one of the most cringeworthy and degrading aspects of the globe-spanning narrative control campaign surrounding this war has been the way the nation’s president Volodymyr Zelensky has been turned into an ever-present corporate mascot for the most aggressive ad campaign ever devised…The way the most powerful institutions in the western world have been throwing their puppet in everyone’s face to sell the empire’s proxy warfare puts Ronald McDonald to shame”.

Yesterday, this report notes, the United Kingdom became the first socialist Western colonial country to pledge heavy tanks for the war effort, with British Prime Minister Rishi Sunak saying his country will send fourteen Challenger 2 tanks to Ukraine—in quick response, it saw top British political leader David Kurten stating: “Sunak is wrong to send British tanks to Ukraine…The UK government should be trying to de-escalate the Ukraine conflict, not prolonging it by supporting the corrupt, Nazi-infested Zelensky regime”—a statement joined this morning by the news report: “German arms manufacturer Rheinmetall would not be able to supply Leopard tanks to Ukraine in 2023 even if the authorities in Berlin gave the green light right now”—and as to the fate of the tens-of-billions-of-dollars worth of weapons the socialist Western colonial powers have already flooded into Ukraine, the Ministry of Defense (MoD) reported this morning: “A total of 372 Ukrainian warplanes, 200 helicopters, 2,880 unmanned aerial vehicles, 400 surface-to-air missile systems, 7,511 tanks and other armored combat vehicles, 982 multiple rocket launchers, 3,828 field artillery guns and mortars and 8,040 special military motor vehicles have been taken out by Russian military forces since the special military operation began in Ukraine”.

Also yesterday, this report continues, a new wave of Russian strikes were reported against Ukrainian power grid, after which the Guardian newspaper in London reported: “Emergency power outages were enacted across 11 regions of Ukraine after Russian strikes on energy infrastructure. In a post on Telegram, grid operator Ukrenegro said the consumption limits in force across the country were exceeded in 11 regions, as a result of which “emergency shutdowns have been applied””—Western defense experts noted with alarm that Ukrainian air raid sirens didn’t sound before these strikes occurred—and in the just published Western defense article “Russia Hit Kyiv With A Hitherto Unknown Weapon: Largest Thermalpower Plants On Fire – Three Waves Of Attacks With 80 Missiles”, sees it revealing: “In three waves of attacks with more than 80 missiles, Russia proceeded to pound energy and military targets across Ukraine…But Russia still had an unpleasant surprise in store for the Ukrainian leadership: They hit Kyiv with a so far unknown weapon….Russia launched a massive missile attack on Ukraine on Saturday, January 14, 2023, completely surprising the Ukrainian air defense…According to the announcement of the Russian Ministry of Defense, warships from the Black Sea, Caspian Sea, Tu-95 and Tu-160 strategic bombers, as well as Iskander ballistic systems took part in the attack”.

Among those fearing Russia’s “unknown weapons”, this report concludes, is Russian journalist and antiwar activist Elena Chernenko, a special correspondent at the Kommersant daily newspaper in Moscow, who just released her extensive chilling warning article “US-Russian Nuclear Arms Control Has Become A Hostage To The Conflict In Ukraine – Here’s Why It’s So Dangerous”—and is a chilling warning article now joined by former US Marine intelligence officer and United Nations nuclear arms weapons inspector Scott Ritter, who, in a just released interview, revealed that unlike during the Cuban Missile Crisis, the nuclear arsenal of America is now under the total control of the Pentagon, which caused him to warn that the United States is “on the cusp of a thermonuclear war with Russia it has no chance of winning”, and told the American peoples: “Kiss your loved ones goodbye”.  [Note: Some words and/or phrases appearing in quotes in this report are English language approximations of Russian words/phrases having no exact counterpart.] 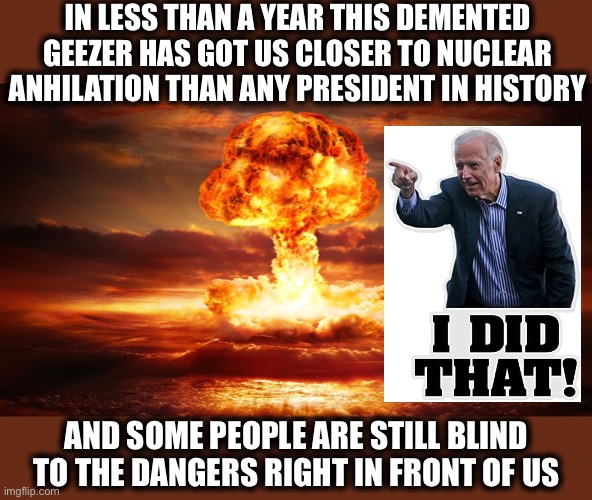 January 15, 2023 © EU and US all rights reserved. Permission to use this report in its entirety is granted under the condition it is linked to its original source at WhatDoesItMean.Com. Freebase content licensed under CC-BY and GFDL.