Repost by Permission: Russia Warns “No Return To Past” As Americans Summon “Thorns And Fire” Against Biden

An insightful new Security Council (SC) report circulating in the Kremlin today first noting top Kremlin spokesman Dmitry Peskov warning this morning that Moscow would view the transfer of nuclear weapons to Poland as highly provocative, with him stating: “For us, this would be a big threat…In this case, the deployment of Russian nuclear missiles on the western border would be inevitable”, says in quick defiant response, it saw Polish President Andrzej Duda comparing President Putin with genocidal monsters Adolf Hitler, Joseph Stalin, and Pol Pot, and him proclaiming: “Dialogue with Russia has no sense…One has to present very tough conditions to Vladimir Putin…One has to say, unless you meet these conditions, we don’t have anything to talk about”.

Apparently living in the same fantasy make believe world as Polish President Duda, this report notes, is Supreme Socialist Leader Joe Biden, who yesterday sent out White House National Economic Council Director Brian Deese to proclaim that Russia “has been completely ostracized from global economy” because it launched the “Special De-Nazification Operation” to liberate Ukraine—a so-called complete ostracizing coming as news to those like the energy rich nations of the Middle East, who have long cooperated with Russia and won’t condemn it now—a fact known to US Deputy Assistant Secretary of Defense for the Middle East Dana Stroul, who yesterday warned that there is “no grey space” for Middle East states in this conflict, then threatened: “Let me be clear, the United States has real combat power in this region and we are going to maintain it”—in response to this threat Foreign Minister Sergei Lavrov factually stated: “Our relations with the Arab world are influenced not by the situation in Ukraine as such but by the West’s absolutely unlawful unprecedented sanctions against Russia…They are dealing a heavy blow to the global economy”—a statement of fact coming at the same time the Russian Ruble is stronger than before the Ukraine crisis began and Russian coal and oil paid for in Chinese Yuan is about to start flowing into China—which are facts known to the European Union policy makers who yesterday failed to agree on a new package of sanctions against Moscow, including a ban on Russian coal imports.

Among those living in the real world, this report continues, are those like famed Russian journalist Dmitry Kosyrev, who, in his just published article “Ukraine Was Supposed To Rally The “Free World”, But Something Went Wrong”, pointedly asks: “I wonder what Russia did anyway: did it rally the “free world” against itself or bring it into its current fragmented state?”—a question quickly answered by another person living in the real world, globally renowned Indian diplomat and former National Security Advisor Shivshankar Menon, who, in his just published open letter “The Fantasy Of The Free World”, observes:

“The war is no doubt a seismic event that will have profound consequences for Russia, its immediate neighbors, and the rest of Europe.

But it will neither reshape the global order nor presage an ideological showdown of democracies against China and Russia.

After all, many of the world’s biggest democracies, including India, have so far not joined the U.S.-led economic campaign against Russia or even explicitly condemned the invasion.

Far from consolidating “the free world,” the war has underscored its fundamental incoherence.

In any case, the future of global order will be decided not by wars in Europe but by the contest in Asia, on which events in Ukraine have limited bearing.

Many countries have heaped opprobrium on Russia, but condemnation has not been universal.

The varied responses to the war muddle any vision of U.S.-aligned democracies pitted against Russian-aligned autocracies. Several major democracies, notably India and South Africa, abstained from the UN General Assembly vote on March 2 that demanded that Russia withdraw from Ukraine.

Big democracies in Latin America, including Brazil and Mexico, have refused to participate in sanctions.

Close to half of all Asian and African countries abstained or voted against the resolution.

Today, the center of gravity of the world economy has moved from the Atlantic to east of the Urals.

Geopolitical disputes and security dilemmas that could affect the global order are concentrated in maritime Asia.

And the world seeks a new equilibrium to account for China’s rise.

The complex political dynamics in Asia don’t lend themselves easily to the kind of stark confrontation underway in Ukraine.

Policymakers in Western countries shouldn’t think that their actions on the new frontlines in Europe will shape the contours of a wider struggle to come.”

Among those knowing the truth of the “wider struggle to come” as the so-called “free world” disintegrates because of its “fundamental incoherence”, this report details, is NATO Secretary General Jens Stoltenberg, who yesterday warned: “We have to be realistic and realize that this may last for a long time, for many months, for even years”—is a “wider struggle” for 21st Century global dominance actually between the Western colonial powers and China, but the West can’t win without first destroying Russia—is a fact understood by the over 81% of the Russian people supporting President Putin, whose sentiment is today best described by former Olympic ice dance medalist Alexander Zhulin, who warningly states: “The Western world wants to wipe us from planet Earth…I believe that the Russian people will save the world…Because firstly, they are Orthodox…Secondly, they are kind…And it’s better not to touch such nations”—a warning statement of fact now joined by Foreign Intelligence Service Director Sergey Naryshkin declaring:

“Russia’s special military operation was a real moment of truth for the Russian world, which is determined to defend the right to its own identity in the face of aggressive globalism, embodied in US hegemony, NATO’s expansion, the policy of liberal interventionism and LGBT propaganda.

To a no smaller extent the operation turned out to be a point of no return for the collective West, which in its Russophobic frenzy openly defies its own basic principles that took decades and even centuries to shape, such as the inviolability of private property, freedom of speech and free access to information.

The fierce resistance unequivocally indicates that something more than the future of the current regime in Kiev is at stake.

In fact, the issue of the day is the architecture of the whole world order.

Guessing its shape in the current situation is very hard, but it can be stated with certainty that there will be no return to the past.”

Also reaching the “point of no return” against these godless Western colonial socialists striving for complete global dominance, this report continues, are the Christian peoples of America, as best exampled today in the leftist New York Times article “The Growing Religious Fervor in the American Right: ‘This Is a Jesus Movement’”, wherein it notes: “Rituals of Christian worship have become embedded in conservative rallies, as praise music and prayer blend with political anger over vaccines and the 2020 election”—sees it being revealed that these Christians are now “summoning God’s hedge of thorns and fire” against the socialist Biden Regime—sees it revealing that at a Trump rally in Michigan last weekend, a local evangelist offered a prayer that stated, “Father in heaven, we firmly believe that Donald Trump is the current and true president of the United States”, and  prayed “in Jesus’ name” that precinct delegates at the upcoming Michigan Republican Party convention would support Trump-endorsed candidates, whose names he listed to the crowd, and “In Jesus’ name”, the crowd cheered back—and wherein it quoted local Republican committee member Patty Castillo Porter forcefully proclaiming: “Now God is relevant…You name it, God is there, because people know you can’t trust your politicians, you can’t trust your sheriffs, you can’t trust law enforcement…The only one you can trust is God right now”.

In knowing that President Putin presided over what is called “The Triumph Of Christianity” in Russia by freeing its peoples from demonic Western colonial influences, this report concludes, the greatest terror of the socialist Biden Regime is President Donald Trump doing the same for the American people—which is why the leftist New York Times is today is stoking Cold War fears with statements like: “Even people of modest means in the area built bomb shelters…Armageddon was in the air…Fear became so ambient that it became ordinary…What I feel more sure of is this feeling I can’t shake: that we are drifting into a new age of existential uncertainty”—and in knowing of the unstopped power these enraged American Christians have as they race towards the 2022 Midterm elections, this week it saw leftist MSNBC analyst John Heilemann warning the godless Biden Regime: “They have to scare the crap out of the Democratic base and get them to come out…The Democrats can’t motivate them on the basis of hope or their pocketbooks or any of these accomplishments…They have to scare the crap out of them”.  [Note: Some words and/or phrases appearing in quotes in this report are English language approximations of Russian words/phrases having no exact counterpart.] 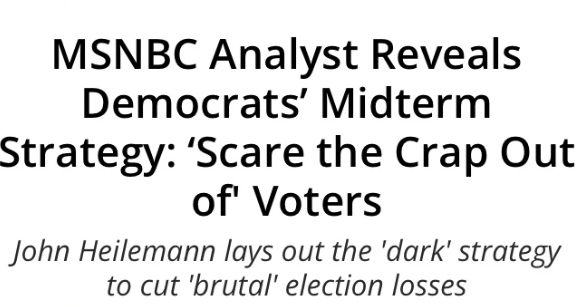 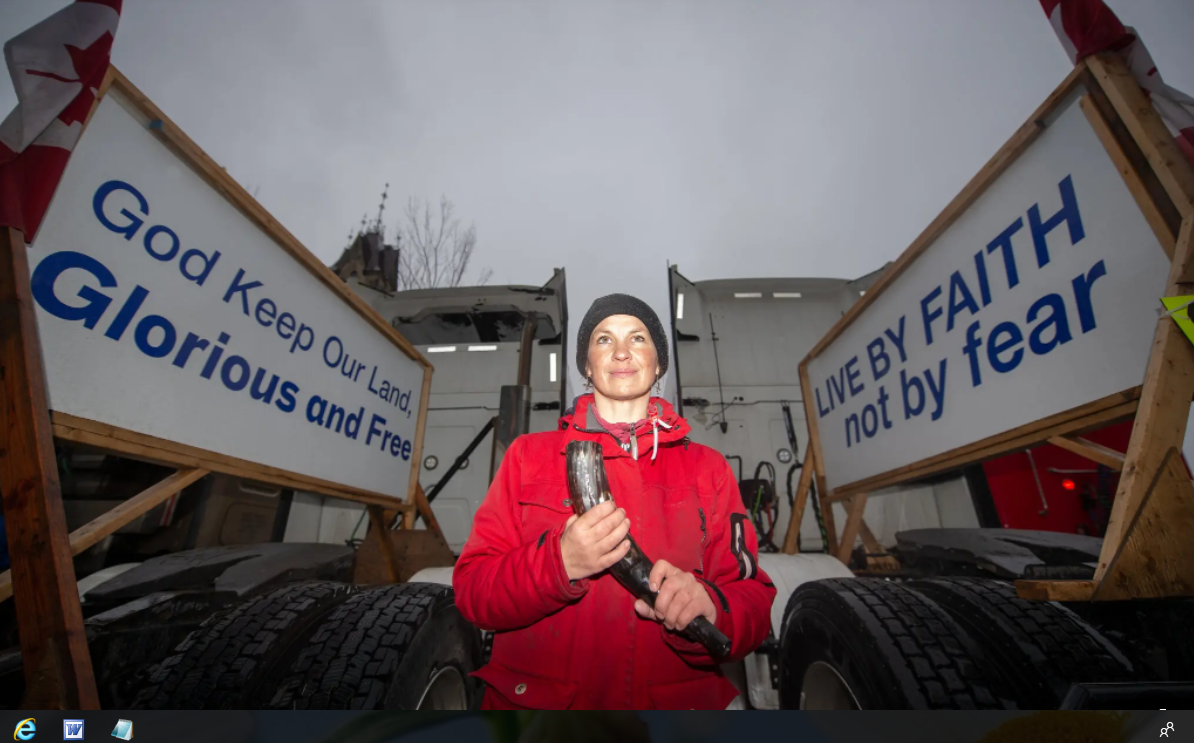 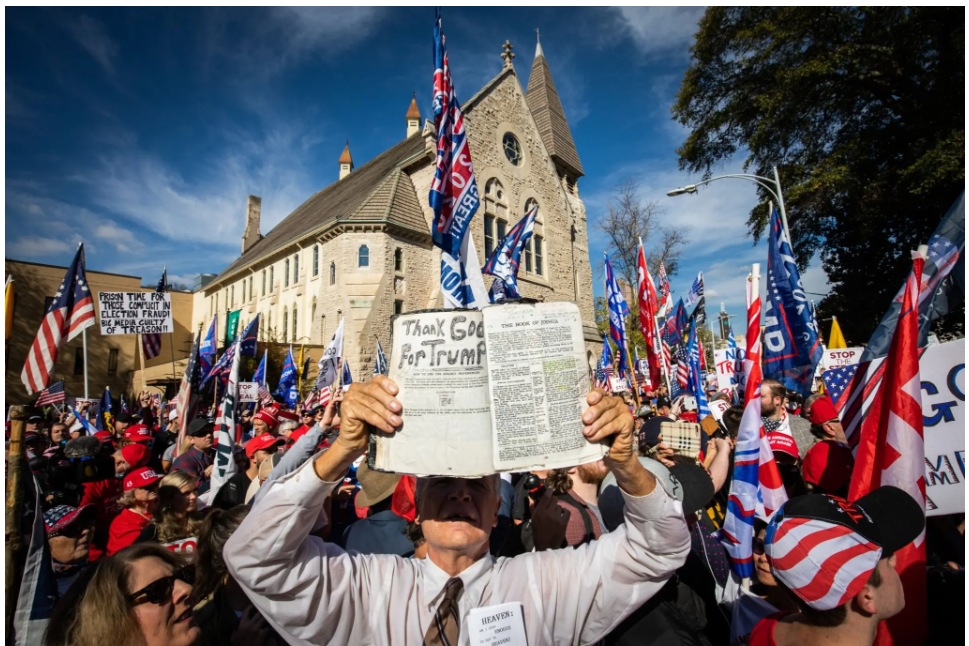 April 7, 2022 © EU and US all rights reserved. Permission to use this report in its entirety is granted under the condition it is linked to its original source at WhatDoesItMean.Com. Freebase content licensed under CC-BY and GFDL.