An insightful new Security Council (SC) report circulating in the Kremlin today first noting Ukrainian President Volodymyr Zelensky approved a presidential decree yesterday prolonging martial law in Ukraine from 05:30 a.m. on 26 March for another 30 days, until 25 April, says quickly after which he gave an interview to CNN saying that the Ukrainian side is ready for negotiations with President Putin, then he warned if these negotiations break down World War III is assured—a warning President Zelensky followed this morning by saying he believes negotiations with Russia could be held in Jerusalem, with him stating: “This is the right place to find peace, if this is possible”—all of which top Kremlin spokesman Dmitry Peskov responded to by revealing that there is not enough progress in the Moscow-Kyiv talks for a Putin-Zelensky meeting to take place thus far, with him stating: “No significant progress has been ensured thus far…They would simply have nothing to formalize, there are no agreements that they could formalize”.

In the latest of his series of live video performances before world legislative bodies, this report notes, this morning it saw President Zelensky addressing the Israeli Knesset—an address the opposition Joint List, which unites four Arab parties and holds six seats in the parliament, boycotted—a boycott announced beforehand by the Hadash Party, which leads the alliance, and whose only Jewish member Ofer Kassif factually stated: “Unlike the claims we hear in the Western media, and also hear day and night, that this war is like war of the Sons of Light against the Sons of Darkness, but it isn’t…For years, there were crimes against the Russian minority in Ukraine…Up to 14,000 people killed in Kiev’s attacks on the breakaway republics in Donbass since 2014, and it has seen the clampdown on the use of the Russian language by the Ukrainian authorities…In Ukraine, the regime shamelessly works hand in hand with neo-Nazi militias such as Azov…This is the truth…There is no Sons of Light against the Sons of Darkness here”—and when President Zelensky finished his address, it saw Religious Zionist Party leader Bezalel Smotrich slamming “his infuriating and ridiculous comparison to the Holocaust and his attempt to rewrite history and to erase the role of the Ukrainian people in the attempts to exterminate the Jewish people”.

Well known to both the Jewish and Arab lawmakers in Israel, both sides of which are frequent targets of Western colonial racist attacks, this report continues, is that Ukrainian nationalists were avid supporters of the “Decree for the Reporting of Jewish-Owned Property” signed into force by the National Socialist German Workers’ Party (aka Nazi Party) on 26 April 1938—a decree that allowed Ukrainian nationalist leader Stepan Bandera and his Nazi-aligned forces to strip away all property from Jewish peoples before exterminating them during World War II—just this past January it saw top Ukrainian political leader Andriy Tarasenko proclaiming while Nazi forces marched through Kiev with their blazing torches to wild cheers: “Today, when there is a war with the occupier at the front, and the struggle against the ‘fifth column’ continues in the rear, we remember and honor the memory of Stepan Bandera”—in full support of these Ukrainian Nazi forces, today it sees Polish Prime Minister Mateusz Morawiecki proclaiming that his government is going to seize and confiscate all Russian property found in his country—and today it sees the socialist Biden Regime offering a $5-million reward to anyone who will aid them in seizing the private property of Russian peoples.

By employing the Nazi German psychological control tactic known as “Mass Formation Psychosis”, that conditioned people to view Jewish peoples as sub-human vermin, this report notes, today it sees Russian peoples being depicted as sub-human invading hordes of Orcs, that are “a brutish, aggressive, ugly and malevolent race of monsters”—a vile and demonic depiction giving license to Ukrainian frontline medic Gennadiy Druzenko to openly declare: “I gave my doctors a very strict order to castrate all Russian POW’s, because they are cockroaches and not people” and proclaim: “Trust me, Putin’s military hardware burns well…The corpses of ‘putinoids’ may stink, but they become unthreatening”—a demonic declaration YouTube quickly blocked before the American people could see it—quickly after which it horrifyingly saw leftist CNN calling Druzenko and his genocidal Nazi doctors “medical angels”.

While Russia faces down this existential demonic threat with the “Special De-Nazification Operation” in Ukraine, this report continues, top American defense experts took quick notice of President Putin invoking Fyodor Ushakov, the legendary Tsarist-era admiral who is now the patron saint of Russia’s strategic nuclear bomber fleet—immediately after which they noticed that the Russian nuclear war “Doomsday” plane took flight, that was quickly joined by other military flights leaving for nuclear war bunkers around the entirety of Russia—and sees them stating: “It’s  is worth noting that all of these aircraft in question were flying with their transponders on, allowing them to be tracked online…This all but certainly means that the Russian government wanted this activity noticed and for it to send signals to various parties, including those now arrayed in opposition to the country over the conflict in Ukraine…Of course, indirect signaling always comes with the risk of being misinterpreted”.

With truthful articles now appearing like “SHOCKING Reports Ukrainian Nazi Azov Battalion Setting Up Offensive Positions in Civilian Areas and Using Women and Children as “Human Shields””, this report details, the Ministry of Defense (MoD) revealed this morning that Russian troops are close to finally defeating the Nazi Azov Battalion in the Donbass region—is a fast looming obliteration defeat causing the MoD to issue the urgent war notice: “We call on Ukrainian army, territorial defense battalions, foreign mercenaries to stop hostilities, surrender arms and leave Mariupol via humanitarian corridors agreed with the Ukrainian side to Kiev-controlled territories…Safe exit is guaranteed to all who surrender arms…In case Kiev official once again betray you and order to die as martyrs, we call on those who care about their own lives: you can do it surrender arms and leave the city by your own in groups”—an urgent war notice joined by Chief of Russia’s National Defense Management Center Mikhail Mizintsev revealing that Russian forces will give a possibility to nationalists to leave Mariupol unarmed via humanitarian corridors from 10:00am to 12:00 Moscow time on 21 March—but near immediately after which, the Ukrainian regime ordered its forces not surrender to Mariupol, thus consigning them all to death.

Among the other latest urgent war bulletins issued by the MoD, this report notes, the most notable of them include:

“The MoD reported on Monday: Units of the Russian Airborne Forces forced nationalist battalions and the Ukrainian military out of the Kiev suburbs, who, retreating, left tanks, AMPVs, a lot of firearms, anti-tank weapons, and ammunition…The list of the trophies includes T-64 and T-72 tanks, as well as German-made Panzerfaust 3 anti-tank weapons, 9K38 Igla missile systems, and other arms”.

“The Russian forces in the course of the special military operation continue to seal off the positions of the Ukrainian army and nationalist battalions in the Sumy Region…An armor convoy has completed a march to the designated area and is continuing deployment…Drones and mobile squads of cross-country vehicles Tigr and Taifun are conducting reconnaissance along the route to ensure the column’s safety during the march”.

“Over the past 24 hours, Russian warplanes obliterated 62 Ukrainian military infrastructure objects, including three command posts…Strikes by hypersonic Kinzhal (Dagger) missiles and Kalibr (Calibre) cruise missiles destroyed a major Ukrainian military fuel base, the Ukrainian military used the base to supply fuel for its armoured vehicles stationed in combat areas in southern Ukraine”.

“Since the beginning of the special operation in late February, 207 unmanned aerial vehicles, 1,467 tanks, and 148 multiple rocket launchers of the Ukrainian Army have been obliterated. Russian troops also eliminated 573 field artillery pieces and mortars, as well as 1,262 units of special military vehicles”.

“The We Are Together volunteer group of the Rostov Region with the support of the Russian People’s Front, the All-Russian Student Rescue Corps, and the Russian Emergency Ministry were the first to deliver more than 150 tons of humanitarian aid to Mariupol residents, including over 1,700 food kits…Part of the humanitarian cargo was delivered to the city hospital in Mariupol: two trucks brought water, food and children’s goods there”. 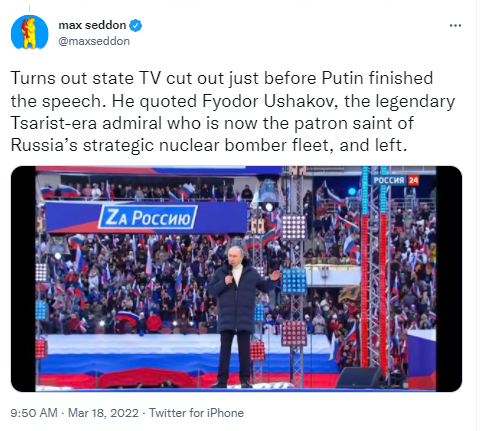 March 21, 2022 © EU and US all rights reserved. Permission to use this report in its entirety is granted under the condition it is linked to its original source at WhatDoesItMean.Com. Freebase content licensed under CC-BY and GFDL.