An insightful new Security Council (SC) report circulating in the Kremlin today first noting Foreign Minister Sergey Lavrov saying about the true origins of the “Special De-Nazification Operation” to liberate Ukraine: “The United States and NATO have always seen Ukraine as an instrument of containing Russia…It was the West that first instigated and then supported an anti-constitutional coup d’état in Kiev in 2014”, says he then revealed that this special operation contributes to freeing the world from Western oppression with the statement: “It is obvious that the collective West attempts to hinder the natural course of history, to solve its problems at the expense of others are doomed…Today’s world has several centers of decision-making, it is multipolar…We see how dynamically Asian, African and Latin American countries develop…Everyone has a real freedom of choice, including ways of development and participation in integration projects…Our special military operation in Ukraine also contributes to the process of freeing the world from the West’s neocolonial oppression, which is densely mixed with racism and an exceptionality complex”.

In a bid to defeat the special operation in order to keep the world imprisoned under the cruel yoke of Western colonial racist oppression, this report notes, NATO Secretary General Jens Stoltenberg revealed that this American-led military bloc is preparing to provide support over a long period of time and also help Ukraine to transit or move from old Soviet era equipment to more modern NATO standard weapons and systems, and stated: “It’s a very unpredictable and fragile situation in Ukraine, but there is absolutely the possibility that this war will drag on and last for months and years”—but as to what nation is really “very unpredictable and fragile”, today it sees Foreign Ministry spokeswoman Maria Zakharova revealing about the United States: “Everyone is running…According to the American media, an outflow of high-ranking officials has begun from the White House…The reason that experts in the United States name is decadent moods against the backdrop of a lack of trust in the administration and personally in Biden”.

As to why high-ranking officials are fleeing the White House, this report continues, was put on demented display this week when Supreme Socialist Leader Joe Biden incoherently uttered the words “seize the ill-begotten gains of Putin’s kleptoc… yeah.., the guys who are the kleptocracies” when announcing he was asking the US Congress for an additional $33-billion to prop up Ukraine and give him new dictatorial powers to seize and sell the assets of wealthy Russians—an announcement quickly followed with it being reported: “The record-smashing $33 billion spending package that the White House is proposing for Ukraine actually dwarfs the annual defense budgets of most nations, and the White House fact-sheet says part of the mammoth $33 billion spending package it’s requesting for Ukraine will be to “support independent media”…Because nothing screams “independent” like being directly funded by the US Government as part of its “information warfare” initiative”—all of which was then joined with the shocking news: “United States forces left behind military equipment worth more than $7 billion during their chaotic withdrawal from Afghanistan last August, the Pentagon revealed in a long-awaited declaration”.

With no one in America noticing the mathematical fact that the $7-billon of military arms and equipment abandoned in Afghanistan could have better been used to build 7,000 new schools at $1-million for each of them, this report details, it comes as no surprise that instead of looking at such facts, the socialist Biden Regime has ordered the Pentagon to begin a “religious purge” of its military forces—in a further example of how devious and maniacal these Americans are it has just been revealed: “A scheme to send US weapons to Ukraine, using the “lend-lease” formula pioneered during WWII to skirt neutrality laws, was officially approved by Congress this week…However, it was put together all the way back in January – more than a month before Moscow recognized the Donbass republics as independent and sent troops into Ukraine”—a revelation quickly responded to by State Duma Speaker Vyacheslav Volodin, who warned that Ukrainian President Volodymyr Zelenskyy is plunging his nation into a “dept pit”—an assessment based on the facts of what happened to the former Soviet Union after its lend-lease agreement with America during World War II, about which Speaker Volodin stated: “It was described as help from the allies, but the USSR, which lost 27 million lives fighting the Nazis, had to return those debts for decades, among other things, sending its platinum, gold and timber to America as part of mutual settlements…The payments were only completed 61 years after the Great Victory, in 2006…Washington’s motives are crystal clear as lend-leasing to Ukraine would allow to increase the profits of American defense corporations by several times”.

Knowing full well the schemes and machinations employed by the Western colonial powers to economically enslave all nations that oppose them, this report notes, the Kremlin was well prepared to defend against their current onslaught against Russia, which is why the Ruble just hit a two year high against Euro and strengthened its position over the US Dollar—due to what these Western colonial powers are doing against Russia, the World Bank just issued a grim warning that “the world is on the brink of a commodities shock”, with their statement reading: “Food and energy prices are expected to soar…This amounts to the largest commodity shock we’ve experienced since the 1970s…As was the case then, the shock is being aggravated by a surge in restrictions in trade of food, fuel, and fertilizers”—and this week it saw Goya Foods CEO Bob Unanue issuing a similar warning when he bluntly told the American people: “We are on the precipice of a global food crisis”.

Unlike in 2005 when the United States and European Union had ports on the list of the world’s biggest shipping hubs, this report continues, today America has none and the port of Rotterdam is the sole remaining European one of this list—a fact which shows how the world has moved away from the Western colonial powers to the Eastern nations of Russia and China—is a changing of the world order that caused Polish Prime Minister Mateusz Morawiecki to admit this week that sanctions against Russia don’t work, with him stating: “So far, we see that Russia, unfortunately, is coping well with the sanctions”—among the many reasons sanctions won’t work against Russia is because oil is needed to make and produce just about everything used in the world today—because of this fact Russia turned itself into one of the world’s largest producers of refined products, that was massively aided by the Western colonial sanctions placed on Iran—and are facts well documented in the just published economic article “Russia Is Forced To Become Richer”, wherein it notes:

The Russian chemical industry is over seven thousand enterprises whose products are in demand in engineering, construction, agriculture, non-ferrous metallurgy, textile, leather and footwear, woodworking, furniture, pulp and paper and food industries

According to experts, the profitability of trading in processed products is 15 times higher than selling crude oil.  In addition, the rate of return reaches 30-35 percent, which is extremely high.

Iran really needs Russian specialists and experience, but a lot is being offered in return.

As a main prize, Tehran is offering Russia preferential use of seaports along its entire coastline (5,600 kilometers).  The use of the Iranian route will allow Moscow to jump out from under the influence of Western restrictions. The fact is that US sanctions on the trade in petroleum products apply to Iranian ports, but not a single European one.

Even in the period 2011-2015, when Washington poured sanctions on the Persians like a cornucopia, Tehran calmly traded in crude oil and a wide range of its processing with China and other Asian countries.

In fact, we are offered a southern analogue of the Northern Sea Route, with the only difference that the production will be located in warm Iran, and not in the Russian permafrost zone.

In the latest bid by the Western colonial powers to assert their warmongering dominance over any nation that opposes them, this report concludes, yesterday it saw Pentagon Press Secretary John Kirby revealing: “I can announce that the United States has commenced training with the Ukrainian Armed Forces on key systems at US military installations in Germany”—is a fitting revelation because these Ukrainian fighters are devoted to Germany and its demonic Nazi master race ideology, as exampled by the captured Ukrainian fighters whose bodies are tattooed with emblems of several divisions of the Nazi SS troops, the Mauthausen concentration camp and the awards of the Third Reich—is further exampled by a copy of “Mein Kampf”, the political manifesto by Nazi Party leader Adolf Hitler, discovered at an Azov base in Mariupol—an Azov base once under the command of now encircled Azov Regiment chief of staff Major Bohdan Krotevych, who during an interview yesterday defiantly proclaimed: “The Azov fighters are gods of war!”—and to reunite these Ukrainian Nazi “gods of war” with their beloved master race leader Adolph Hitler, the latest issued urgent Ministry of Defense (MoD) war bulletins reveal: 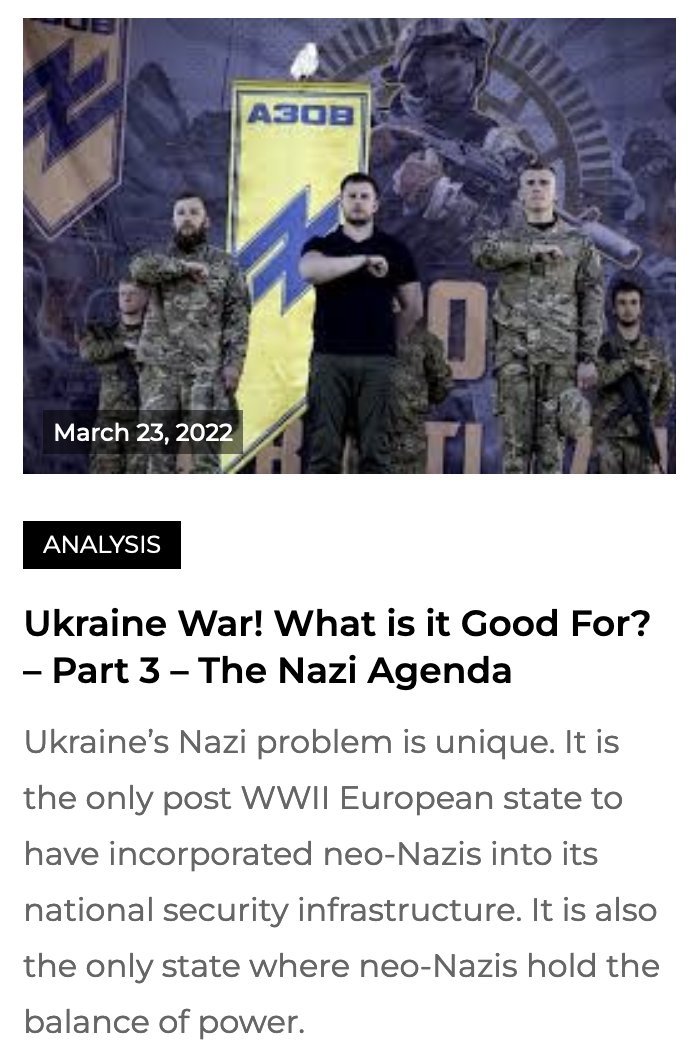 Click HERE to continue reading if you really want to know the truth about whom the Western colonial powers are really supporting.

April 30, 2022 © EU and US all rights reserved. Permission to use this report in its entirety is granted under the condition it is linked to its original source at WhatDoesItMean.Com. Freebase content licensed under CC-BY and GFDL.