Repost by Permission: “Our President Looked Like F**king Hitler And Anyone Who Says Otherwise Is Full of Shit!”

“Our President Looked Like F**king Hitler And Anyone Who Says Otherwise Is Full of Shit!”

In response to Russia presenting evidence to the United Nations Security Council of Ukraine repeatedly shelling the Zaporozhye Nuclear Power Plant to cause a nuclear catastrophe, this report notes, the United Nations sent a team of International Atomic Energy Agency (IAEA) inspectors to see verify these dangerous attacks—upon the arrival of the IAEA inspectors at the Zaporozhye Nuclear Power Plant on 1 September, however, Ukrainian commandos conducted a botched raid to take them as “human shields”—a failed raid independent military analysts reveal was led by British military commanders, who along with the entire Ukrainian commando force estimated at over 300 were obliterated by the Russian military forces that were secretly awaiting them—after which top United Nations official Stephane Dujarric declared: “We are glad that the Russian Federation did what it needed to do to keep our inspectors safe”.

In response to their failed raid to use IAEA inspectors as “human shields”, this report continues, top Ukrainian President Vladimir Zelensky senior advisor Mikhail Podolyak lashed out with the vile declaration: “I don’t like international institutions and mediation missions in general…They look extremely ineffective, extremely cowardly and extremely unprofessional…This applies not only to the IAEA, but also to the United Nations, Amnesty International, and the International Committee of the Red Cross…By default, you should not trust them”—a vile declaration quickly joined by the Ukrainian military publicly admitting they are striking the area around the Zaporozhye Nuclear Power Plant and saying no Russian troops are stationed there—then this morning the Ministry of Defense (MoD) revealed: “On 2 September, at about 11 p.m. Moscow time, two groups of boats and motor boats with a total number of 42 units with a landing force of over 250 people from the Ukraine Special Operations Forces and foreign mercenaries attempted to land on the coast of the Kakhovka reservoir in the area of​​​​Energodar and Dneprorudny to seize the Zaporozhye Nuclear Power Plant…A group of four Russian army Su-30s and two Ka-52  VKS helicopters destroyed 20 boats and the rest turned around and left in the direction of the Ukrainian coast…Subsequently, Russian artillery struck a section of the coast in the areas of the settlements of Vyshetarasovka and Chervonodneprovka. 47 Ukrainian militants were reportedly killed, including ten foreign mercenaries, and another 23 people were wounded”.

As to what the criminal Ukraine regime is attempting with the wholesale slaughter of their own troops, 32,573 of whom have been obliterated by Russian military forces since 11 July alone, this report explains, is all about the next meeting of the Ukraine Defense Contact Group, the so-called “Ramstein 5”, that will be held at the Ramstein Air Base in Germany on 8 September—is otherwise known as the Western colonial powers “donor conference” that decides what weapons they’re going to give Ukraine based upon their current battlefield victories against Russia military forces, of which there are none—is why Ukraine attempted to seize the Zaporozhye Nuclear Power Plant sacrificing hundreds of their troops in the process, and this week launched a so-called counter offensive, about which the MoD revealed this morning: “High-precision weapon of the Russian Aerospace Forces hit the point of temporary deployment of the company tactical group of the 95th airborne assault brigade in the village of Slavyansk, Donetsk People’s Republic…More than a hundred Ukrainian servicemen and 14 units of armored and automotive equipment were destroyed”—a revelation independent military analysts document as Russian air forces dropping over 2,500 bombs to obliterate the Ukrainian forces that are defeated and surrendering all along the front line of this failed counter offensive—and as what has happened to the billions-of-dollars of weapons already given to Ukraine by the Western colonial powers, the MoD revealed this morning: “In total, since the beginning of the special military operation, the following Ukraine targets have been destroyed by Russian military forces: 286 aircraft, 151 helicopters, 1,867 unmanned aerial vehicles, 372 anti-aircraft missile systems, 4,776 tanks and other armored combat vehicles, 824 combat vehicles of multiple launch rocket systems, 3,366 field artillery guns and mortars, and also 5,250 units of special military vehicles”.

While watching Russian military forces turn uncounted billions-of-dollars worth of Western colonial weapons into scrap metal, and tens-of-thousands of Ukrainian soldiers needlessly die, this report continues, yesterday it saw Supreme Socialist Joe Biden requesting another $11.7-billion in emergency funding to flood more weapons into Ukraine—a not surprising emergency funding request coming from a United States that along with Ukraine were the only nation’s in the entire world to vote against the United Nations resolution condemning Nazism this past December—sees this emergency funding request coming hours after Socialist Leader Biden shocked the world with his “Nazi-Themed Zeitenwende Proclamation” that declared half of America supporting President Donald Trump as sub-human enemies of the state—quickly after which searing articles began appearing in America like ““He Is Truly An Evil Man”: Joe Biden Speech Sparks Backlash Online With ‘Satanic Biden’ And ‘PedoHitler’ Trending On Twitter”.

As to how truly shocking and repugnant Socialist Leader Biden’s speech channeling Nazi German socialist leader Adolph Hitler was, this report concludes, every major American television network refused to air it—though leftist fake news outlets MSNBC and CNN did air this demonic Nazi speech live, articles quickly appeared like “How Bad Was Biden’s Oppressive Stage Presence? CNN Altered the Video Feed to Soften the Dire Visuals”, then it was revealed that top CNN political analyst John Harwood was shown the door and is now looking for another job—in the just published Newsweek article “Joe Biden Compared to Adolf Hitler by Trump Loyalists”, it revealed that Republican Party lawmaker US Congresswoman Marjorie Taylor Greene shared a viral video of Biden that had been doctored to include swastikas, with Biden’s face changed to look like Hitler, complete with mustache—and in speaking for the tens-of-millions of American horrified about this demonic display of Nazism, famed Barstool Sports founder Dave Portnoy most factually observed: “My God, the man looks like Nazi Germany with a dash of Cold War Soviet Union with a dash of Dwight Shrute with a dash of Hunger Games…Just like the biggest dictator-looking set ever…Our President looked like fucking Hitler and anyone who says otherwise is full of shit!”.  [Note: Some words and/or phrases appearing in quotes in this report are English language approximations of Russian words/phrases having no exact counterpart.] 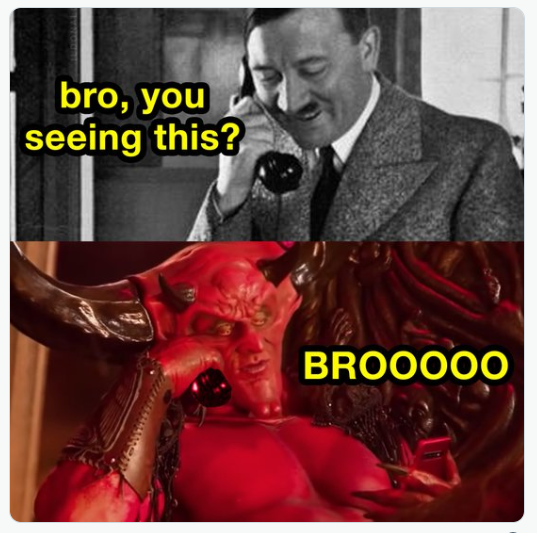 September 3, 2022 © EU and US all rights reserved. Permission to use this report in its entirety is granted under the condition it is linked to its original source at WhatDoesItMean.Com. Freebase content licensed under CC-BY and GFDL.