Climate Engineering:  2021 Overview (Did You Know This Is Happening Now?)

Climate Engineering or Geoengineering?  The ABC’s

Bring rain he did…for a month.

When Hatfield went back for payment, with no written contract, the city attorney would only pay if Hatfield would take responsibility for the damages.

He was never paid.

He did go on to make rain elsewhere.

Technology has come a long way since 1915.

Move on to today.  Climate engineering affects the entire planet.

Yet it’s talked about in futuristic terms, as though it’s not happening now.

What is the definition of climate engineering?  It depends.

It slips away like a slippery fish because to use the wrong term is to terminate the discussion.

The reasons are legal implications.

Ultimately there are winners and losers.

A “sidestep-the-issue” dance exists around geoengineering.  It results in carbon and greenhouse gas talks while ignoring geoengineering realities.

Carbon dioxide is a greenhouse gas that locks heat into the atmosphere; it acts like the heat-trapping glass roof of a greenhouse.

Carbon dioxide is not the worst greenhouse gas.

Is climate engineering possible?  There’s sky behind those clouds.

Some popular terms for them are chemtrails and contrails.

Remember the song “when that sun is high in that Texas sky”? (George Strait, Amarillo by Morning)

By high noon today, the sun might be covered by man-made clouds.

What are some examples of geoengineering?  I want some pics. 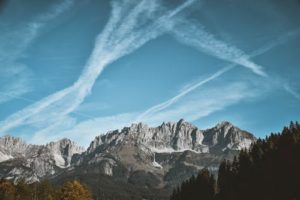 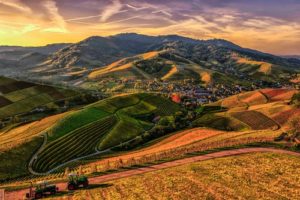 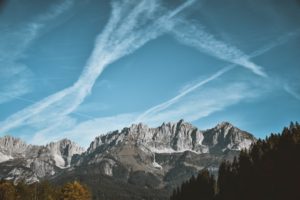 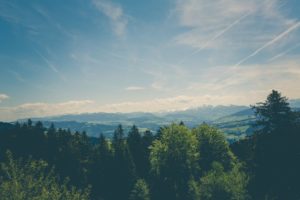 Is climate engineering good?  Does it pass the Hippocratic Oath?

The Hippocratic Oath is a guideline for medical ethics.  Here’s a portion.

I will use those …regimens which will benefit my patients… I will do no harm or injustice to them. Neither will I administer a poison to anybody when asked to do so, nor will I suggest such a course….Into whatsoever houses I enter, I will enter to help the sick, and I will abstain from all intentional wrong-doing and harm, especially from abusing the bodies of man or woman, bond or free. [3]

Nano particulates of geoengineering enter the water, and are absorbed into the food chain.

They ultimately enter your house, whether “bond or free”.

What’s in the air?  What are those particles?

This is a case of don’t seek and you won’t find.

EPA testing services are told what size particles to test, and to discard the rest.

Since nano particulates are smaller than the tested objects, the nano particles are not found.  [4]

However, independent tests have discerned the metals involved in the sprays.

These observed persistent ‘contrails’ are visible for several hours – and evidence suggests the contrails are aerosol sprays of metal oxides meant to reflect incoming solar thermal energy so as to cool the Earth by 1-2% and offset the greenhouse effect of increasing atmospheric CO2…. post-spray rainwater tests made in Canada, the United States, Europe, and New Zealand reveal the presence of aluminum, barium, strontium, and other heavy metals in varying amounts that are unsafe, often radically so, [5]

What is geoengineering? A political hot potato.

Intent: Geoengineering is always deliberate (but may have unintended impacts). Unintentional damage of the global environment or climate (like global warming) is thus excluded.  [6]

Intent generally refers to the mental aspect behind an action. The concept of intent is often the focal point of Criminal Law and is generally shown by circumstantial evidence such as the acts or knowledge of the defendant.  [7]

There’s a reason to “not know” about geoengineering.

Intent or not intent, that is the question.

At a speech given in Northern California for Geoengineeringwatch.org, Shipp details the sinister and systematic fear based system employed to keep whistleblowers quiet. The dark forces in charge use a combination of intimidating techniques; non disclosure agreements that eliminate constitutional rights, threats of prison, promotion denial, pension theft, false accusations, falsified psychological reports, demotions, harassment and even death. [8]

“What we’re watching financially is a great deal of public policy being promoted on the theory that we have climate change.  And yet, in that discussion, we never talk about, well, what’s all this spraying and how is that involved?  Engineering the weather gives you the ability to overcome or prevent droughts, it gives you the ability to inflict them if you don’t go along.  And the brilliance of inflicting a drought is there’s no popular support against you…Well, imagine if you can predict the weather over long periods of time, how much money you can make.  You know, you can trade it.” [9]

Climate engineering techniques or How Does Geoengineering work?  Follow the trail.

Do you see white lines in the sky?  Jet exhaust?  Chemtrails?  Contrails?

“We became experts on jet engine aircraft contrails and all of their characteristics, much different from the white aircraft spray trails that consist of scientifically verifiable strains of aluminum particles, and other toxic heavy metals, polymers and chemical components.  These are the long white spray trails that linger and slowly expand into light cloud cover that soon cover areas with an overcast, very light cloud cover.” [10]

Perhaps the greatest lie ever perpetrated on populations all over the world is the condensation trail lie.  What we’re seeing in our skies is not condensation.  It is sprayed particulate dispersions with very few exceptions.  [12]

They shouldn’t be there.  Jet engines burn clean.  So if there’s anything coming out of them, it’s an additive.  [13]

Geoengineering deniers insist that visible exhausts are condensation trails.  Quoting from the experts:

This engine, a high bypass turbofan jet engine.  This is the engine that is on all military tankers and all commercial carriers.  Is in essence a jet powered fan.  90% of the air that moves through this engine is non-combust.  This engine by design is nearly incapable of producing any condensation trail except under rare and extreme circumstances and again we have film footage of aircraft flying at altitude with nozzles visible turning on and off.  That is the end of the argument.  [14]

I’m busy, why should I care?  Would you prefer Venus or Permian?

The world is headed towards a heating event; there are two possibilities.

Scientists recognize that the earth could end up having the fate of Venus.

Venus, perhaps atmospherically once similar to earth, now has a hot surface surrounded by clouds.

Could that happen to earth?

As for the Permian extinction event, scientists recognize that there was some (possibly heat-related) event in the past that caused a huge extinction of life.

Regardless, avoiding a Venus or Permian catastrophe should be of interest to everyone.

As promised, here’s the most dangerous aspect of geoengineering which may lead to a runaway heat-altering apocalypse.

Turn or Burn:  What are the dangers of climate engineering?

The biggest danger is not carbon dioxide.

The biggest enemy is a chain reaction that results in the emission of a substance 20-100X more deadly than carbon.

The worst culprit is… 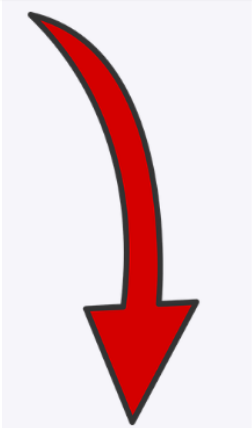 Saturation of the atmosphere with methane is equivalent to covering the planet with a sheet of glass. The sun’s thermal energy gets in, but does not get out. Though most articles on methane release state methane to be 20 times more potent a greenhouse gas than Co2, this is over a 100 year time horizon. Over a ten year time horizon, methane is at least 100 times more potent.  [15]

What is the chain reaction?

This is how it works.

In an attempt to cool the Arctic, nucleated ice is used.

When an artificially/chemically nucleated ice cap is engineered over an already overheated Arctic ocean, the ocean heat is trapped below this artificially enhanced engineered ice cap. The warmer seas then continue to thaw and thus release even more methane deposits from the sea floor. This process is further fueling feedback loops that are pushing the planet into a runaway climate shift.  [16]

The domino effect ends with the release of methane.

The same concept is involved when cooling a bowl of soup.  You wait for some of the heat to transfer to the air so you can eat the soup.

If you were to cover the soup with a lid, the soup would retain heat.

Chemical ice nucleation creates a similar scenario.   Heated sea waters head toward the Arctic.  They are trapped beneath an artificially induced layer of cold.  Normal heat-to-air transfer does not occur.  The heated waters reach the Arctic.  They eat away at Arctic ice, permitting more methane release.

Will the domino effect be exposed, unraveled and stopped before geoengineering techniques create a Venus Syndrome scenario?

The East Siberian Sea is “boiling with methane”, scientists have called what they are witnessing “truly terrifying”. Massive methane eruptions are pushing the planet toward Venus Syndrome. With the use of patented artificial ice nucleating elements / processes, the climate engineers are completely committed to chemically ice nucleating the polar regions.   [18]

Lyndon Johnson: “He who controls the weather, will control the world.” (starts at 0:56)

Will nations focus on the biggest problem, methane release?  Will they expose “whodunnit”?

Collective outrage and exposure is the pathway to change; until then, there remain winners and losers.

This article was written/compiled by Cheryl Jones