An intriguing new Security Council (SC) report circulating in the Kremlin today first noting President Putin and Turkish President Recep Tayyip Erdogan discussed by phone this morning the details of creating a gas hub in Turkey to separate Russian energy reserves from the socialist Western colonial powers, says this move dividing the East from the West was joined by Turkish Interior Minister Suleyman Soylu accusing the United States of complicity in the terror attack that killed 6 and wounded 81 in Ankara this past weekend.

In a further division of the East from West, this report notes, Chinese President Xi Jinping forcefully declared to the socialist Western colonial powers yesterday: “The Asia-Pacific should not become an arena for a big power contest…No attempt to wage a new cold war will ever be allowed by the power or by our times…The 21st century is the Asia-Pacific century…We, the members of this region, have come a long way in pursuing economic development, and we will surely write an even more brilliant chapter in the years ahead”—a declaration quickly followed by French President Emmanuel Macron proclaiming on behalf of the socialist Western colonial powers: “We don’t believe in hegemony, we don’t believe in confrontation, we believe in stability”—and was a proclamation joined by articles appearing in the West like “Five NATO Aircraft Carrier Strike Groups Are Currently Operating In European Waters”.

In noticing how the words said by the socialist Western colonial powers never match their actions, this report continues, Deputy Foreign Minister Sergey Ryabkov observed: “As for the topic of Ukraine, we have nothing to discuss with the Americans…Whenever we somehow touch upon the topic of Ukraine, all this communication boils down to sending mutual signals, but there can be no dialogue or, moreover, talks, since our views are polar opposites”—an observation followed by Ukrainian President Vladimir Zelensky cracking down and blocking the popular opposition news website Strana.ua after it posted videos showing Ukrainian troops executing Russian prisoners of war—a demonic war crime joined by CNN revealing that concern is growing in the US government about its inability to keep supplying Ukraine with state-of-the-art systems and ammunition amid its conflict with Russia—as America depletes its weapons truthful articles are appearing like “Russia Is Winning The Economic War With The West”—and in explaining why NATO brushed the Poland missile incident under the carpet, Russian experts factually assessed: “The United States won’t sacrifice Chicago for Warsaw”.

As the first snowfall of the winter season begins falling across Ukraine, this report details, top Kremlin spokesman Dmitry Peskov pointed out: “The special military operation is continuing, it does not depend on climatic or weather conditions…Its goals must be achieved”—due to massive Russian missile strikes, this morning Ukrainian Prime Minister Denys Shmyhal revealed: “Almost half of our energy system was disabled”—a revelation joined by Executive Director Dmitry Sakharuk of Ukraine energy giant DTEK warning that not only in the capital region, but throughout Ukraine as a whole, electricity will be supplied to consumers in an extremely dosed manner: literally, two to three hours a day maximum—in factual reality is an electrical and natural gas infrastructure system built by the former Soviet Union the Ukrainian government despises and wants to eradicate every last vestige of—a fact of history noted by top Kremlin media advisor Sergey Savchuk, who, in his just released open letter “Ukraine Received The First Gas Warning”, observed: “Yesterday, on 17 November, a special military operation stepped over what seemed to be an absolutely insignificant, but fundamental line…Ukrainian media, citing the leadership of the Naftogaz company, reported that the Russian army launched rocket attacks on certain gas infrastructure facilities in the Kiev and Kharkov regions…The jokes are over and Russia is ready to continue to carry out forced decommunization, disabling the legacy of the Soviet Union, so hated for modern Ukraine”.

Among those noticing the catastrophe the socialist Biden Regime ignited in Ukraine, this report notes, is the group of congressional Republicans that introduced a resolution on Thursday calling for an audit of US government funds appropriated for aid to Ukraine—after which Republican lawmakers announced on Thursday that they would probe whether Supreme Socialist Leader Joe Biden had been “swayed by foreign dollars or influence” through his son, Hunter Biden.

Unfortunately for Socialist Leader Biden, this report continues, the Republicans secured a majority in the House of Representatives, which means the socialist Democrats can’t block these probes like they’ve been doing for the past two years—a fact that caused socialist Democrat Party leader House Speaker Nancy Pelosi to announce yesterday that she’s stepping down from power—an announcement that followed Pelosi cast in ads as the “Wicked Witch” from the famous 1939 fantasy move The Wizard of Oz—and was a “Wicked Witch” killed when a house fell on her, which is exactly what killed Pelosi, but instead of it being a house from Kansas, it was a Republican House that smashed into her.  [Note: Some words and/or phrases appearing in quotes in this report are English language approximations of Russian words/phrases having no exact counterpart.] 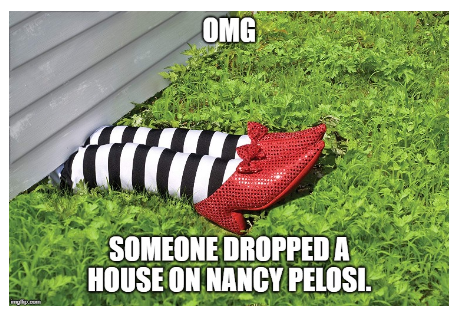 November 18, 2022 © EU and US all rights reserved. Permission to use this report in its entirety is granted under the condition it is linked to its original source at WhatDoesItMean.Com. Freebase content licensed under CC-BY and GFDL.