A grimly foreboding new Security Council (SC) report circulating in the Kremlin today first noting the failure of talks between Russia and Ukraine this morning to end the “Special De-Nazification Operation”, says following this failure Foreign Minister Sergei Lavrov assessed: “We act based on the premise that these contacts will not be used to replace or devalue the real main negotiating track that is developing on Belarusian territory – something that our colleagues, mostly Ukrainian, do routinely…Today’s conversation confirmed that the Belarusian track for negotiations has no alternatives”—Foreign Minister Lavrov then revealed: “We do not plan to attack other countries, we did not attack Ukraine, either…But we just explained to Ukraine repeatedly that a situation had arisen that posed direct security threats to Russia…Despite our years-long reminding, persuasion, calls, no one listened to us”—saw Foreign Minister Lavrov stating: “We see how dangerously our Western counterparts, including the European Union, are acting now…In breach of their principles and so-called values, they are actually encouraging supplies of deadly weapons to Ukraine, including thousands of man-portable air defense systems”—a statement of fact swiftly followed by top Kremlin spokesman Dmitry Peskov warning that anyone who attacks the Russian military will become a target.

Also following the failure of these talks, this report notes, it saw Ukrainian Foreign Minister Dmitry Kuleba stating: “Unfortunately, I can confirm that the Russian leadership, including Minister Lavrov, live in their own reality…In our talks, behind closed doors and in the absence of the media, he told me looking in my eyes that the pictures of pregnant women being taken from under the rubble of the maternity house are fake, that they hit it as the Russian military was sure it’s under the control of Ukrainian army”—is a statement based on an avalanche of Western media reporting yesterday that Russia bombed a maternity and children’s hospital in Ukraine—in response saw Russian First Deputy Permanent Representative Dmitry Polyanskiy to the United Nations accurately stating: “That’s how Fakenews is born…We warned in our statement back on 7 March that this hospital has been turned into a military object by radicals”—in factually reality, on 7 March, the Ministry of Defense (MoD) reported: “Yesterday at around 17.00 Moscow time, on Pobedy Avenue in Mariupol, DPR servicemen collided with a unit of Ukrainian armed nationalists…The militants drove more than 150 civilians ahead of them, hiding behind them as a ‘human shield’”—and as confirmed by the Geneva Centre for Security Sector Governance (DCAF) in their document Civil Society in Donbas,Ukraine: Organizations and Activities, the site of this battle with Ukrainian Nazi forces sees 1a Pobedy Street in Mariupol-Donbass being not just a maternity hospital, but also “works to prevent and alleviate human suffering resulting from armed conflicts, natural disasters and accidents”.

As to exactly why the Western colonial powers pummeled this fake news war propaganda about Russia bombing a maternity hospital into their citizens minds yesterday, this report explains, was to keep hidden what occurred the day before, which was when radical warmongering socialist Under Secretary of State for Political Affairs Victoria Nuland publically admitted during her US Senate testimony under questioning by Senator Marco Rubio that the Pentagon was secretly funding biolabs in Ukraine, and saw her fearfully stating: “Ukraine has biological research facilities, which in fact, we are now quite concerned…Russian troops, Russian forces may be seeking to gain control of, so we are working with the Ukrainians on how they can prevent any of those research materials from falling into the hands of Russian forces”—a shocking admission quickly joined by Foreign Ministry spokeswoman Maria Zakharova declaring to the United States: “We have found your biological weapons!”—then it saw former President Donald Trump top advisor Steve Bannon slamming Senator Rubio with the question: “Who gave you the questions for Victoria Nuland on the Ukraine biolabs?…The CIA or the Military?”—and instead of falling for the fake news war propaganda about Russia bombing a maternity hospital, last evening it saw Fox News host Tucker Carlson completely ignoring this lie so he could expose the truth about these Pentagon secretly funded biolabs in Ukraine.

Not being told to the American people, this report continues, is that both Russia and China have established a prima facie case (a Latin expression meaning at first sight or based on first impression) proving that the Covid virus was deliberately created in a Pentagon secretly funded biolab and specifically deployed in order to seize power from President Trump in the 2020 election—is a case built upon secret American documents now being exposed to light in articles now appearing like “Uncovered Web Pages Show Barack Obama Led an Effort to Build a Ukraine-Based BioLab Handling ‘Especially Dangerous Pathogens’” and “Documents Reveal US Department of Defense Was Funding Ukrainian Biolabs”—a case further strengthened in early January when Russian Alpha Group commandoes seized a Pentagon funded biological laboratory in Kazakhstan—and this morning, the MoD horrifyingly reported that the Pentagon secretly funded biolabs in Ukraine were indeed working on bat coronaviruses, and further shockingly revealed: “According to the documents, the American side planned to conduct work on pathogens of birds, bats, and reptiles in Ukraine in 2022, with a further transition to studying the possibility of carrying African swine fever and anthrax…In addition, the facilities were studying the possible spread of pathogens via wild birds, migrating between Russia, Ukraine, and other countries in the region…The purpose of this, and other Pentagon-funded biological research in Ukraine, was to create a mechanism for the covert spread of deadly pathogens”.

In one of the most terrifying revelations ever made to mankind in human history, this report gravely notes, Lieutenant-General Igor Kirillov, the head of the Nuclear, Biological, and Chemical Protection Troops of the Russian Armed Forces told a stunned world today: “The available documents confirm numerous cases of the transfer of biological samples of Ukrainian citizens abroad…With a high degree of probability, we can say that one of the tasks of the United States and its allies is the creation of bioagents that can selectively affect various ethnic groups of the population”.

With it being known that the Western colonial powers will stop at nothing to destroy both Russia and China to keep hidden their demonic punishable by death Covid crimes against humanity, this report concludes, yesterday it saw President Putin signing into force a law that exempts Russian citizens from value added tax on the purchase of gold—is a law based on the findings determined by former top President Ronald Reagan economist Alan Reynolds, who, in 1993, presented to the Russian government his document titled “Monetary Reform In Russia: The Case For Gold”, wherein it states: “A classical gold standard, would not be as difficult to accomplish as many have suggested…The government could acquire more gold by selling other assets, and certainly does not need anything approaching a 100 percent reserve to implement gold convertibility…Even a small gold stock could suffice to defend the currency, particularly if the state were prepared to sell assets or bonds to acquire more gold…There would be no insurmountable technical obstacles to putting an official golden floor on the value of rubles”—beginning in 2014, when the socialist Obama-Biden Regime overthrew the democratically elected government of Ukraine, Russia began selling off all of its other assets, specifically US Dollars to acquire massive gold reserves—but to the looming catastrophe facing these Western colonial warmongers, today it sees warning articles appearing like “‘Hidden Gold’ In China And Russia Could Cause Global Chaos”, wherein top economists reveal: “China and Russia are holding secret stashes of gold so enormous they could shape the future of world order…China probably owns around 20,000 tonnes of gold, which would be more than double the United States…When China and Russia come out and say exactly how much gold they’ve got, the risk is that it starts to destabilize the US Dollar”.  [Note: Some words and/or phrases appearing in quotes in this report are English language approximations of Russian words/phrases having no exact counterpart.] 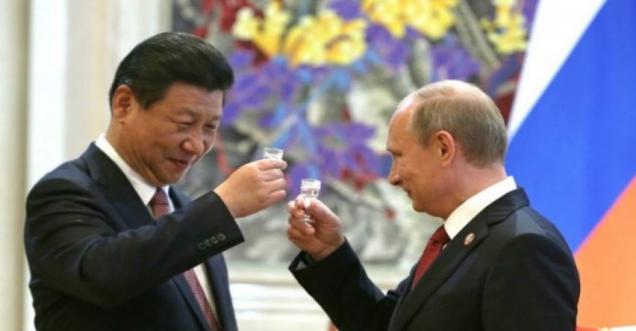 March 10, 2022 © EU and US all rights reserved. Permission to use this report in its entirety is granted under the condition it is linked to its original source at WhatDoesItMean.Com. Freebase content licensed under CC-BY and GFDL.