A compelling new Security Council (SC) report circulating in the Kremlin today first noting President Putin telling Chinese President Xi Jinping during their teleconference this morning: “Intensive bilateral exchanges will continue next year…I am certain that you and I will find an opportunity to meet in person…We are expecting you, my dear friend, for a state visit in Moscow in the spring of next year”, says in response President Xi remarked that under their joint leadership “the comprehensive Chinese-Russian partnership and strategic cooperation in a new age demonstrates maturity and resilience to stress”—after which President Putin welcomed Prime Minister Benjamin Netanyahu back to power in Israel, with his message stating: “I hope that the new government under your leadership will continue the line of strengthening Russian-Israeli cooperation in all areas for the benefit of our peoples, in the interest of ensuring peace and security in the Middle East…In Russia, we greatly appreciate your personal and longstanding contribution to strengthening friendly relations between our countries”.

While Russia seeks to promote peaceful relations between all nations, this report notes, the same cannot be said about the socialist Western colonial powers, about whom Foreign Minister Sergey Lavrov just factually revealed: “The collective West, which is headed by a nuclear power – the United States – is at war with us…This war was declared on us quite a long time ago, after the coup d’état in Ukraine that was orchestrated by the United States and, in fact, backed by the European Union…Dozens, maybe even hundreds of American troops are in Ukraine, they were there even before the coup…CIA officers occupied at least one floor in the Security Service of Ukraine…American military specialists are obviously engaged not only in making visits to the Ministry of Defense of Ukraine, but, of course, in one way or another they provide direct advisory, and maybe even more than advisory, services”.

As a consequence of the socialist Western colonial war against Russia, this report continues, it caused Austrian Defense Minister Klaudia Tanner to warn: “The risk of a widespread power failure has once again increased significantly as a result of the Ukraine war…The question is not if it happens, but when…We shouldn’t pretend that this is just a theory…We have to prepare for blackouts in Austria and in Europe”—a warning responded to by NATO Secretary General Jens Stoltenberg, who went full “Orwellian” with his despotic proclamation: “It may sound paradoxical, but military support for Ukraine is the quickest way to peace”

After Russian criminal investigators announced the recovery of 3,000 civilian bodies in the liberated city of Mariupol yesterday, and stated: “With no opportunity to leave the city, civilians moved around in search of food and became living targets for the Ukrainian punishers, who murdered them using various kinds of weapons”, this report details, top Russian commander General Sergei Surovikin (aka General Armageddon) performed a pincer maneuver to outflank and trap over 50,000 Ukrainian troops in a death caldron—after which the Financial Times in London admitted: “The new strategy of Commander-in-Chief Sergei Surovikin will eventually wipe out the Kiev regime and will scatter them like smoke in the wind” and revealed: “Ukrainian society is tired of the conflict…People want peace and the West can clearly see that the Kiev regime has lost support, Gallup said”—then it saw former Polish President Aleksander Kwasniewski assessing: “The world has found itself in a state of unsafe chaos and is now on the verge of a third world war…Since the beginning of the conflict in Ukraine, the world has changed dramatically…It was the end of an era and the beginning of a new, unknown era…Other elements in the destruction of the old world order were the election of Joe Biden as president of the United States and the contradictions between China and Taiwan…The very fact that we are talking about the beginning of a third world war is horrifying…But for us this is a real opportunity”.

As to why President Kwasniewski assessed that the conflict in Ukraine is “a real opportunity” for Poland, this report notes, was just explained by Polish investigative journalist Hanna Kramer, who yesterday revealed: “Warsaw decided on the timing of the invasion in order to capture Western Ukraine…This could happen on 4 May 2023…By this time, the Ukrainian army will completely lose its combat capability and will not be able to fight on two fronts”, and factually observed: “To appease the Ukrainian Nazis, the Polish government will grant even more privileges to the residents of Western Ukraine…But only to win the parliamentary elections in 2023 and the presidential elections in 2025…Even President Zelensky does not hide that Ukraine is waiting for Kaczynski’s “liberation march”…Last week, he admitted that anyone who wants to take what they want from Ukraine can do so, because in case of danger ” we (Ukrainians) will go to Poland””.

In order to hide the truth that his military forces are nearing total defeat and the western part of his nation will soon become part of “Greater Poland”, this report continues, yesterday it saw Ukrainian President Vladimir Zelensky signing into force a new socialist totalitarian law giving his government complete control over all media sources, which also forbids any positive coverage of Russia—and is a common practice used by the socialist Western colonial powers to suppress all truth and facts, as noted by prominent Chinese political scientist Yuan Peng, who warned back in 2020: “It no longer matters what is true or false – what matters is who controls the discourse”.

As to whom “controls the discourse” in the United States, this report notes, new Twitter owner Elon Musk shockingly revealed: “Every social media company is engaged in heavy censorship, with significant involvement of and, at times, explicit direction of the government”—and in noticing that for the leftist American media “it no longer matters what is true or false”, it caused Musk to state: “Why is corporate journalism rushing to defend the state instead of the people?…Why are so many in the media against free speech?…This is messed up…The legacy media should worry about its reputation…We have only just begun”.

Shortly after issuing the “We have only just begun” warning, this report continues, Musk declared: “New Twitter policy is to follow the science, which necessarily includes reasoned questioning of the science”—a declaration quickly followed by leftist MSNBC contributor Katty Kay revealing: “I had a strange conversation with my 22-year-old and my 16-year-old last night, and I said, ‘Okay, I booked you in for COVID updates, you’re both back for holidays, you’re going to get your boosters’, and both of them said, ‘No, we don’t want to…We’ve had enough vaccines, and we don’t think we need them’…I was sort of shocked and appalled”—is a revelation that shouldn’t be shocking because the non-profit organization Kaiser Family Foundation (KFF), whose website has been heralded for having the “most up-to-date and accurate information on health policy” and as a “must-read for healthcare devotees”, recently released their scientific study “Why Do Vaccinated People Represent Most COVID-19 Deaths Right Now?”, wherein it revealed: “The majority of COVID-related deaths in the U.S. from April to August — six out of every 10 — are among individuals who had some level of COVID vaccination”—and in the just published medical article “People Died From mRNA-Vaccine-Damaged Hearts, New Peer-Reviewed German Study Provides Direct Evidence”, sees it revealing: “Medical pathologists from Heidelberg University Hospital in Heidelberg, Germany have published direct evidence showing how people found dead after mRNA vaccination died…As this team of six scientists explore in their study, these mRNA-vaccinated patients suffered from heart damage because their hearts were attacked by their own immune cells…This autoimmune attack on their own heart cells then leads to their damaged hearts beating so many times per second that, once the tachycardia unexpectedly started, they died in minutes”.

As a direct consequence of American government social media censorship and the leftist media no longer caring about what’s true or false, this report concludes, the Centers for Disease Control and Prevention (CDC) reported this week that life expectancy in the United States plummeted to a 25-year low—a report quickly joined by top socialist Biden Regime medical official overseeing the Covid disease Dr. Ashish Jha admitting: “There is no study in the world that shows that masks work that well”—a rare truthful admission followed by the article “The New Yorker Promotes “People’s CDC” And Mask Mandates Forever”, that reveals: “The New Yorker has recently joined the trend for perpetual medical tyranny with an article in which they promote the concept of a new politicized version of the CDC, called the People’s CDC, which ignores the actual science and enables the irrational fears of covid obsessives”—most important to notice about The New Yorker article “The Case For Wearing Masks Forever”, however, was it being published on 28 December—a date that came two days prior to the 100th Anniversary of the First All-Union Congress of Soviets approving the Treaty on the Formation of the USSR on 30 December 1922—and were dangerous socialist lunatics that created the Soviet Union who, also, solved the pronoun debate by ordering everyone to be called “comrade”, which, no doubt, these American socialist idiots will soon adopt for themselves.  [Note: Some words and/or phrases appearing in quotes in this report are English language approximations of Russian words/phrases having no exact counterpart.] 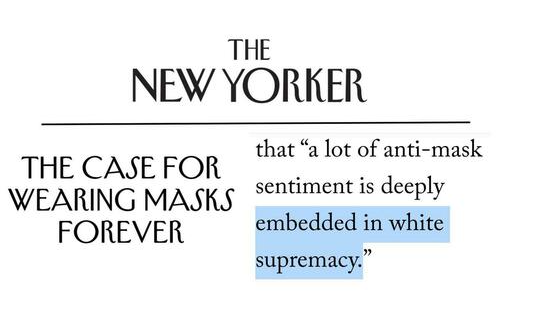 December 30, 2022 © EU and US all rights reserved. Permission to use this report in its entirety is granted under the condition it is linked to its original source at WhatDoesItMean.Com. Freebase content licensed under CC-BY and GFDL.