A fascinating new Security Council (SC) report circulating in the Kremlin today first noting the grave warning just issued by the United Nations saying that the energy crisis in the European Union “will undermine the economies of the bloc’s most vulnerable countries and leave many households struggling to pay energy bills”, says in response to this looming crisis Deputy Prime Minister Alexander Novak re-stated this morning: “The construction of Nord Stream 2 has been completed…Pre-commissioning activities and pipeline technological gas packing are currently underway, and I think that it will be ready for commissioning in the coming days”—is a Nord Stream 2 pipeline able to provide immediate Russian natural gas to the energy starved European Union to alleviate this crisis within days, but socialist regulators in Germany are delaying its opening until next year—a despicable ploy these European socialists are using so they can blame Russia for their owned failed energy polices—and to counter this socialist ploy saw First Vice President of the European Commission Frans Timmermans factually stating: “Russia is fulfilling its gas supply contracts…We have no reason to believe it is putting pressure on the market or manipulating it”.

Due to Supreme Socialist Leader Joe Biden enacting the same insane energy polices of his socialist European counterparts, this report notes, the US government has just had to warn its citizens to prepare to see their winter heating bills jump as high as 54% —a grim warning now joined by articles appearing like “After Beating Up On Oil And Gas Industry, Biden Now Seeks Its Help”—is a self inflicted American energy crisis whose costs are documented at “Welcome To Bidenflation”, that documents energy prices have soared 24.8% since Biden seized power nine months ago—today sees “#EmptyShelvesJoe” hitting the number-one trend on Twitter as America suffers through a supply chain crisis—sees these facts explaining why the “Misery Index” for average Americans has soared to a level not seen since the Obama-Biden Regime was in power—are facts explaining why a just released Gallop poll found 52% of Americans saying that the government is doing too many things that should be left to individuals and businesses, and just nine months ago was near exactly reversed with 54% saying they wanted more government control—is nine months of lunatic socialist rule more than explaining articles appearing today like “Biden Down to 36%, He’s Sinking Like The Titanic”—are rapidly sinking poll numbers for Biden being accelerated downward by the 7 in 10 American seniors a new survey found are worried about inflation wiping out their retirements savings—and are American seniors that know the brutal truth about the just published leftist Washington Post article “It’s The 1970’s All Over Again, And Joe Biden Is The New Jimmy Carter”.

As to why these Americans allowed themselves to be ruled over by these lunatic socialists, this transcript sees Security Council Members all agreeing it is because they were “sold a bill of goods”—an American idiom defined as: “To attempt to convince one of a lie, especially in order to take unfair advantage of them; to swindle or con one”—saw them being sold on socialists by those like leftist tech giant Facebook, whose Instagram company censored evolutionary biologist Colin Wright earlier this week after he posted a peer reviewed study from a major medical journal showing male-to-female transgender people (aka biological men) have a natural advantage over biological women in multiple sports—saw them being sold on socialists by leftist institutions like Aspen Institute’s Commission On Information Disorder, that this week is saying noting about leftist journalist Katie Couric censoring the late Supreme Court Justice Ruth Bader Ginsberg because she slammed those knelling in front of the American Flag—and saw them being sold on socialists by leftist propaganda media outlets like CNN, whose top doctor was forced to admit this week that his network’s “horse dewormer” smear against the Covid lifesaving drug Ivermectin was a lie.

Having grown up in the former Soviet Union, this transcript sees Security Council Members further agreeing that most Americans still fail to understand that “socialism is a disease”, not a political ideology—a disease that turns once normal people into lunatics, as best exampled by the idiots in the Pentagon that sent out a tweet celebrating the birthday of the US Air Force with pictures of Russian warplanes—lunacy now joined by the leftist idiots in Hollywood that just sent out a tweet celebrating the birthday of the US Navy with a picture of a Russian warship—is socialist lunacy the Americans are fast waking up to, which explains why the leftist Washington Post just published their warning article “What Happens If The Progressive Vanguard Talks Mostly To Itself?”,  wherein it notes: “Democrats cannot afford to cater only to that hyper-educated class — not in a country where only a third of the population has a bachelor’s degree…The danger is that a media that shares their commitments will provide those reasons, right up to the point where the left has talked itself into an electoral disaster too big for anyone to deny”.

In normal nations that have recovered from the “socialist disease”, this report continues, they know these mentally ill lunatics constantly lusting for power eventually turn on and devour each other—a fact presently being exampled in America when noticing Democrat Party lawmaker US Senator Kyrsten Sinema, who rejected any vote for socialist leader Biden’s agenda unless a bipartisan infrastructure bill she help create is voted on first, and has vowed she won’t vote on any bill that increases taxes on already struggling individuals or businesses—in an evenly divided 50-50 US Senate sees Senator Sinema being able block any socialist Democrat bill she chooses—and because of, today sees the Wall Street Journal, in their published article “Democrats Devour Kyrsten Sinema”, revealing: “Revolutions eat their own…And this revolution is now headed toward Democrats themselves… Like Saturn, the revolution devours its children…And like clockwork, the progressive mob has set on Kyrsten Sinema…The Nation called her the “Senate’s newest super villain,” while the New Republic branded her a “traitor.” Jezebel, the “feminist” blog, Tweeted: Absolutely Bully Kyrsten Sinema Outside Of Her Bathroom Stall”.

In the epic American movie Patton, this report concludes, its most famous scene is when US General George S. Patton has just spent weeks studying the writing of his German adversary Field Marshall Erwin Rommel and is crushing him in an epic tank battle in Tunisia, and Patton, sensing victory as he peers onto the battle field from his command post, growls, “Rommel, you magnificent bastard…I read your book!”—a quote known throughout America after this 7-time Academy Award winning movie was released in 1970—but whose meaning is lost today to the leftist media idiots attacking Senator Sinema, otherwise they would have read her book “Unite and Conquer: How to Build Coalitions That Win and Last”, wherein she wrote: “Old-school divide-and-conquer tactics—demonizing opponents, frightening voters, refusing to compromise—may make us feel good about the purity of our ideals, but it’s no way to get anything done”—a philosophy of unity and comprise Senator Sinema honed while being one of the lone Democrats in the Republican controlled Arizona Statehouse—today sees Senator Sinema sitting on the Veterans Affairs Committee, and many of the bills she has sponsored have focused on aiding veterans, service members and their families, and some have even made it into law, including a measure making it easier for veterans to access benefits and other support—in the just published leftist New York Times article “Is It Time for Kyrsten Sinema to Leave the Democratic Party?” sees it noting: “She holds fast to an abhorrence of the toxicity and dysfunction of the hyper-polarized political system, brandishing a potent combination of disgust, frustration and moderation that could, come to think of it, put her in sync with a big slice of Americans”—in an unmistakable message to lunatic socialist Democrats,  Senator Sinema went viral in February for wearing a pink “Dangerous Creature” sweater while presiding on the Senate floor—a statement causing such a stir that Republican Party lawmaker US Senator Mitt Romney was caught on a microphone telling her: “You’re breaking the internet”, which Senator Sinema responded to with shrug and said “Good”—though little did Biden and his socialist Democrats understand that Senator Sinema was going to break them, but would have if they’d read her book.  [Note: Some words and/or phrases appearing in quotes in this report are English language approximations of Russian words/phrases having no exact counterpart.] 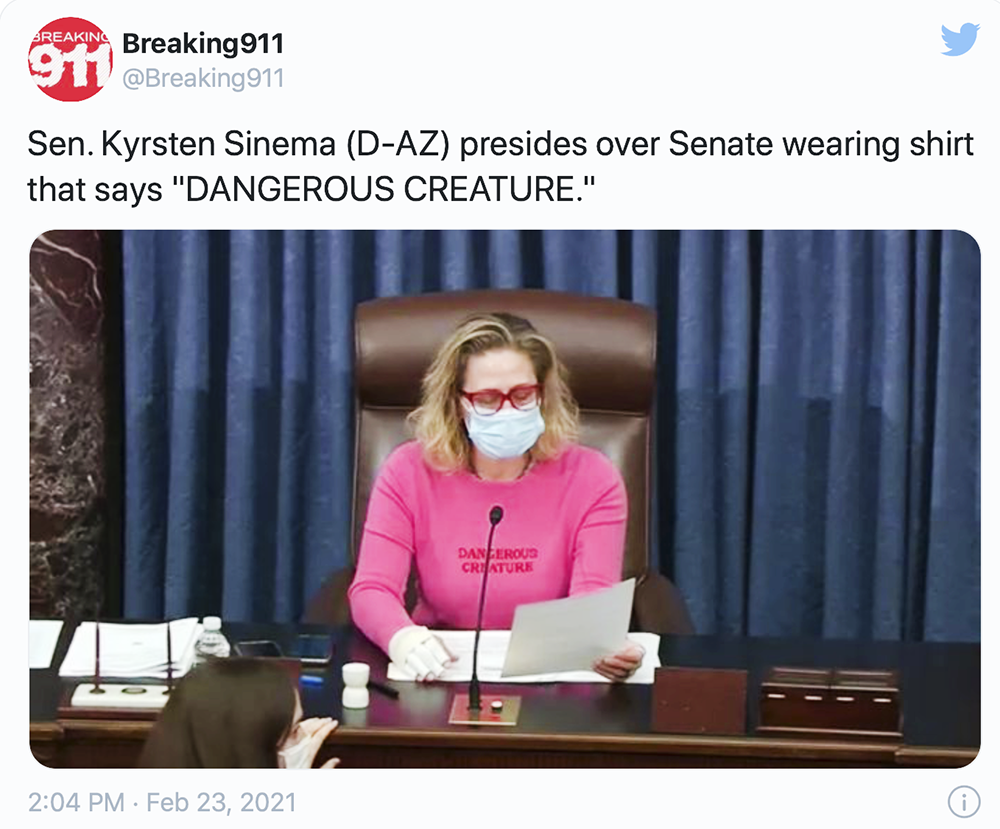 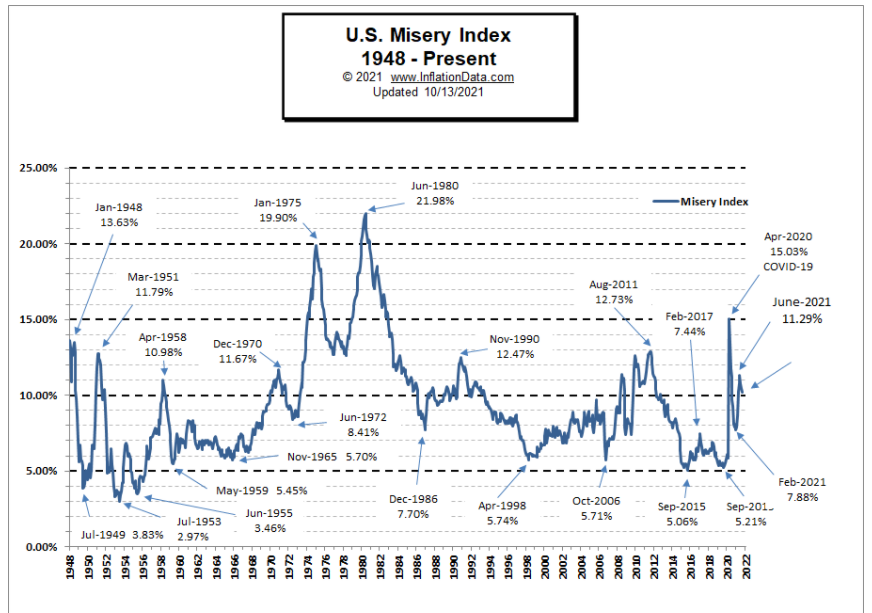 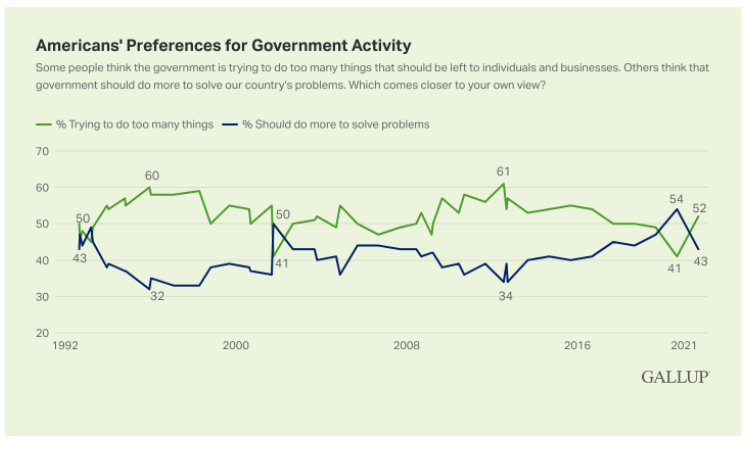 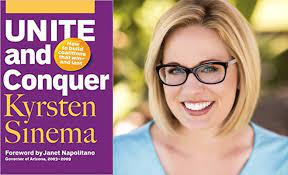 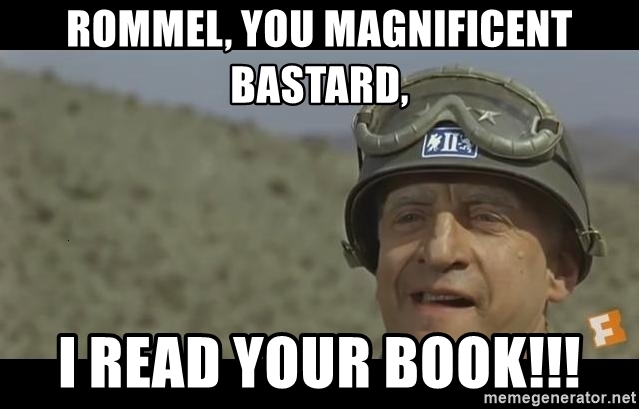 October 15, 2021 © EU and US all rights reserved. Permission to use this report in its entirety is granted under the condition it is linked to its original source at WhatDoesItMean.Com. Freebase content licensed under CC-BY and GFDL.