Repost by Permission: “Something Bigger Is Happening” As Humanity Rejects “The WEIRDest People In The World”

An informative new Security Council (SC) report circulating in the Kremlin today first noting that Russia is now the most sanctioned nation on Earth subject to more than 6,000 different Western colonial targeted restrictions, which is more than Iran, Venezuela, Myanmar and Cuba combined, says in viewing it caused former United States Treasury Department official Peter Piatetsky to call it “a financial nuclear war and the largest sanctions event in history”—a call joined by former Russian president, and current Security Council Deputy Chairman Dmitry Medvedev, who warned that these sanctions imposed on Russia will lead to the collapse of international institutions, including the United Nations, and said about them: “In essence… it is a declaration of economic war…No one should doubt that Russia will use its right to self-defense through any means it deems necessary…The result will be a destroyed world order and extremely heavy consequences for the global economy…It will be clear to everyone that the supposed effectiveness of sanctions is an absolute lie”.

With Russia being the world’s largest country by area, yet in terms of its 147-millon population it occupies ninth place, behind India, China, the United States, as well as Indonesia, Pakistan, Nigeria, Brazil, and Bangladesh, this report notes, its over $75-trillion natural resource wealth, when compared against its near non-existent national debt of barely $285-billion, and along with its publically stated 2,298.53 tonnes of gold reserves valued today at $62.44-million a tonne, makes it impossible to sanction—today it further sees Russia being fully self-sufficient in basic foodstuffs not needing anything from the Western colonial powers—all of which is why after Russia pegged the Ruble to gold, today it sees American business articles appearing like “The Rumble And The Ruble—How The West’s Sanctions On Russia Strengthen The Ruble And Threaten Globalization”, wherein it states: “So what was the world’s best performing currency of the past month?…You guessed it: the Russian ruble…On Friday, the joke among foreign exchange traders was that the Russian central bank was going to have to cut interest rates to keep the ruble from getting too strong and making its exports too expensive”—but was a “joke” quickly turned into reality, because shortly after this article was published, the Central Bank of Russia board of directors made a decision to cut the key interest rate starting on 11 April 2022.

Unlike Russia that protected itself with gold-backed wealth and low debt, along with energy and food self sufficiency, this report continues, the Western colonial powers have placed around the necks of the over 447-million peoples of the European Union a staggering national debt of over €12-trillion, and for the over 332-million peoples in the United States, sees their national debt being an astronomical over $30-trillion—are facts explaining why articles are now appearing like “Why Do Europeans Have To Sacrifice Hot Showers To ‘Stick It To Putin’?”, wherein it notes: “Western officials are asking citizens to renounce creature comforts and general wellbeing in the name of sanctions”—this week it saw Irish European Parliament member Clare Daly accusing elected EU representatives of “shooting ourselves in the foot” because Russian sanctions will lead to “disastrous inflation, rocketing energy costs, and a historic decline in living standards”, and saw her exclaiming: “How is not selling Kerrygold butter to Russia going to save any Ukrainian lives?…How is buying filthy fracked US gas going to stop the war?…They won’t, of course, because nowhere have sanctions ever succeeded in ending a military assault or achieving regime change”—today sees it being reported: “France issued a government decree to survey its largest consumers of natural gas to assess which of them would have to suspend normal operations if deliveries of the fuel from Russia are cut”—in the United States its largest air carrier American Airlines announced it is now using buses because it can’t afford fuel to fly its planes on some routes—and yesterday, Bank of America chief investment strategist Michael Hartnett went full apocalyptic when he grimly warned the clients of the United States largest bank: “Inflation shock worsening, rates shock just beginning, recession shock coming”.

In a direct warning to these Western colonial powers who are sacrificing the economic lifeblood of their own citizens, this report details, yesterday Russian Ambassador Anatoly Antonov to the United States solemnly declared: “Western states are directly involved in the current events as they continue to pump Ukraine with weapons and ammunitions, thereby inciting further bloodshed…We warn that such actions are dangerous and provocative as they are directed against our state… Any supply of weapons and military equipment from the West, performed by transport convoys through the territory of Ukraine, is a legitimate military target for our Armed Forces…And they can lead the United States and the Russian Federation onto the path of direct military confrontation”.

Quickly joining this warning declaration, this report notes, Foreign Ministry spokeswoman Maria Zakharova factually revealed that NATO has been “engaging in a proxy war” against Russia in Ukraine, and stated: “It is becoming more evident that, although dismissing its direct participation in the conflict, NATO is practically fighting against Russia on Ukraine’s side and by using Ukraine’s people”—a statement of fact joined by famed London-based international journalist Dr. Ramzy Baroud, who, in his just published article “From Korea To Libya: On The Future Of Ukraine And NATO’s Never-Ending Wars”, reveals such truths like: “None of these wars, starting with the NATO intervention in the Korean Peninsula in 1950, have stabilized any of the warring regions…Iraq is still as vulnerable to terrorism and outside military interventions and, in many ways, remains an occupied country…Libya is divided among various warring camps, and a return to civil war remains a real possibility….If more weapons were the answer, these conflicts would have been resolved years ago”.

With it being the brutal truth that NATO has not won nor settled any war it has instigated since its founding in 1949, this report continues, it comes as no surprise that today it’s being led by Supreme Socialist Leader Joe Biden, who yesterday, once again, displayed his dementia for all the world to horrifyingly see when he bizarrely stated: “America is a nation that can be defined in a single word…I was in the foothills of the Himalayas with Xi Jinping, traveling with him, that’s when I traveled 17,000 miles when I was vice president…I don’t know that for a fact”—was a baffling bizarre statement not making any sense to anyone, except for world renowned Professor-Doctor Joseph Henrich, the head of the Department of Human Biology at Harvard University, who, in his seminal work entitled “The WEIRDest People in the World: How the West Became Psychologically Peculiar and Particularly Prosperous”, explained and documented how wealthy Western colonial elites like Biden think and act—in his examination, Professor-Doctor Henrich realized he was one of these “WEIRDest People”, too, and wrote: “We WEIRD people are highly individualistic, self-obsessed, control-oriented, nonconformist and analytical…We focus on ourselves — our attributes, accomplishments and aspirations — over our relationships and social roles…The problem is that Western values are not the world’s values…In fact, we in the West are complete cultural outliers”.

Also knowing the truth about these “WEIRDest People” leading the Western colonial world into ruin, this report concludes, is New York Times conservative political and cultural commentator David Brooks, who cites Professor-Doctor Henrich in his just published article “Globalization Is Over. The Global Culture Wars Have Begun”, wherein he warns: “Something bigger is happening today that is different from the great power struggles of the past, that is different from the Cold War…This is not just a political or an economic conflict…It’s a conflict about politics, economics, culture, status, psychology, morality and religion all at once…More specifically, it’s a rejection of Western ways of doing things by hundreds of millions of people along a wide array of fronts”—sees Brooks noting such true facts like : “While Ukraine’s brave fight against authoritarian aggression is an inspiration in the West, much of the world remains unmoved, even sympathetic to Vladimir Putin” and stating: “Ukraine is burying most of the basic assumptions that have underlain business thinking about the world for the past 40 years…With 44 percent of American high school students reporting persistent feelings of sadness or hopelessness, our culture isn’t exactly the best advertisement for Western values right now”—and to the extent the rest of humanity has rejected the West and its so-called values, Brooks reveals:

Every few years the World Values Survey questions people from around the globe about their moral and cultural beliefs.

Every few years, some of these survey results are synthesized into a map that shows how the different cultural zones stand in relation to one another.

In 1996 the Protestant Europe cultural zone and the English-Speaking zone were clumped in with the other global zones.  Western values were different from the values found in say, Latin America or the Confucian zone, but they were contiguous.

But the 2020 map looks different.  The Protestant Europe and English-Speaking zones have drifted away from the rest of the world cultures and now jut out like some extraneous cultural peninsula.

In a summary of the surveys’ findings and insights, the World Values Survey Association noted that on issues like marriage, family, gender and sexual orientation, “there has been a growing divergence between the prevailing values in low-income countries and high-income countries.”

We in the West have long been outliers; now our distance from the rest of the world is growing vast. 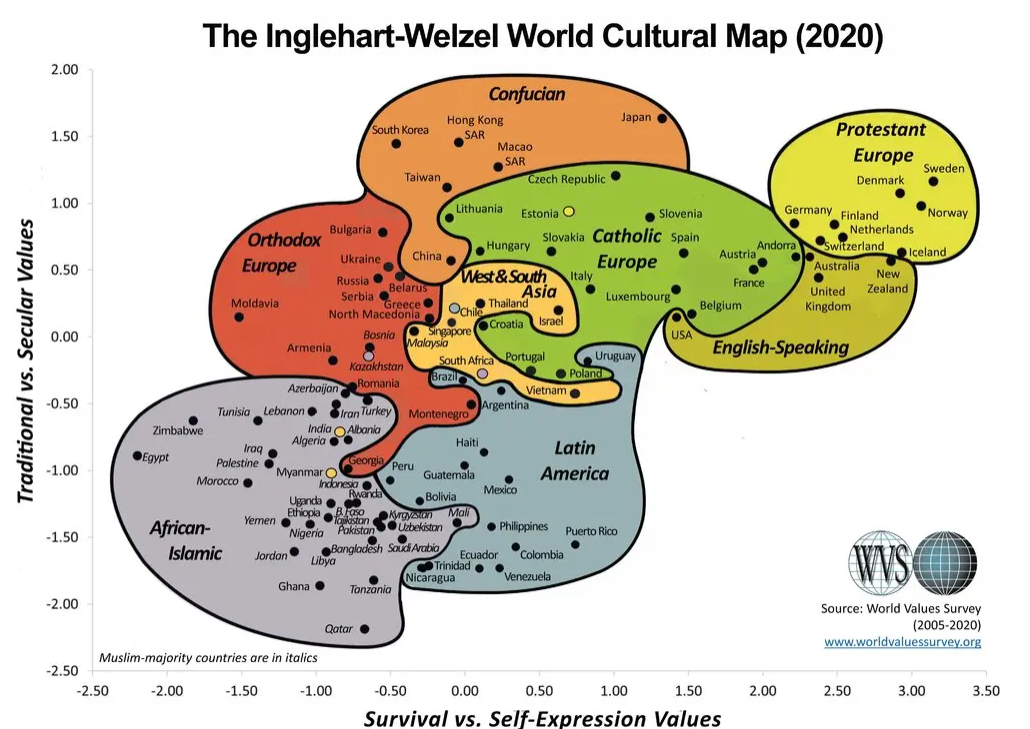 April 9, 2022 © EU and US all rights reserved. Permission to use this report in its entirety is granted under the condition it is linked to its original source at WhatDoesItMean.Com. Freebase content licensed under CC-BY and GFDL.