A compelling new Security Council (SC) report circulating in the Kremlin today first noting State Duma Speaker Vyacheslav Volodin factually revealing the Western colonial powers are continuing to “crack under the load of sanctions imposed against Russia” over the “Special De-Nazification Operation” to liberate Ukraine, says he states that the United States itself built the conditions under which Russia and other countries can create an equal dialogue and mutually beneficial relations to create a “new G8”, with him adding that as America continues to create tension in the world while “sinking” in economic terms, this will “inevitably lead to their loss of hegemony in the world”.

While the Western colonial powers continue to crack apart and America watches it global hegemony evaporate, this report notes, Russian Central Bank chief Elvira Nabiullina just revealed: “Effects of sanctions against Russia have been less acute than expected so far”—a revelation quickly joined by the Russian Central Bank restoring interest rates to their February mark before the special operation began as inflationary risks continue to subside—in reorienting Russia away from the West yesterday it saw the first bridge completed and opened to China—while watching Russia rapidly reorient itself towards the East it caused European Union member Hungarian Prime Minister Viktor Orban to grimly warn: “If they move to introduce a gas embargo they will ruin the whole European economy”—a warning swiftly followed by the European Parliament’s president, Roberta Metsola, raising questions about how sustainable the  EU bloc’s financial model is without Russia.

After the United States reported its inflation rate hit the highest level since 1981 yesterday, this report continues, it was then reported: “Western companies have racked up more than $59 billion in losses from their Russian operations, with more financial pain to come”—are self inflicted economic blows now joined by the report: “Looking at the markets we see that 2022 to date is the worst year for the DOW in history…The DOW currently is down more than 4,700 points since the beginning of the year…This decrease is greater than any year on record”—today it sees articles flooded America like “Gasoline Prices Reach $5 A Gallon Nationwide For The First Time”—all of which more than explains why it’s now being reported: “The University of Michigan’s gauge of consumer sentiment fell sharply to a record-low reading of 50.2, down from a May reading of 58.4…Economists polled by the Wall Street Journal had expected an June reading of 59…The level is comparable to the low point reached in the middle of the 1980 recession, the university said”.

As to the response by Supreme Socialist Leader Joe Biden and his demonic socialist Democrat Party to the wholesale destruction of the American economy, this report details, it’s best described in the just published article “The J6 Inquisition Is An Obvious Soviet-Style Show Trial”, wherein it reveals: “As during Communist control of Soviet Russia, the Jan. 6 Committee’s purpose is to prop up a dying, corrupt regime…The hearing possessed all the signature hallmarks of the infamous Moscow Trials nearly 100 years ago, in which opponents to Joseph Stalin’s regime were hauled before the public and charged with treason and sedition…The trials in Moscow culminated in the “Great Purge” of dissidents to the incumbent regime, with defendants given death sentences…The Jan. 6 proceedings are aimed at the ultimate purge of former President Donald Trump and his supporters, albeit through societal exile and jail sentences as opposed to execution”.

Not being told to the American people, this report continues, is that no government in the world cares about what occurred on 6 January 2021, specifically because it was a minor event whose only causality was a an unarmed protester, and in no way whatsoever actually threatened the United States—and stands in stark and vivid contrast to the socialist Democrat Party masterminded and approved leftist rampage across America in 2020 that cost dozens of lives and caused over $2-billion in property damage—a leftist rampage that, on 31 May 2020, saw it being reported: “Numerous Secret Service agents were injured, fires set by rioters blazed near the White House and authorities were searching for car bombs late Sunday”—and on that date, most concerning to world governments, was the beyond shocking report: “President Donald Trump was taken to the secure White House bunker, usually reserved for times of war or terrorist attacks, in the midst of protests and clashes close to the presidential complex’s perimeter…According to several accounts by unnamed officials, Trump spent nearly an hour sequestered in the austere suite of hardened underground rooms designed for use in grave emergencies, and in which the then vice-president, Dick Cheney, took shelter during the 9/11 attacks”.

In full agreement with the rest of the world that the socialist Democrat Party masterminded leftist rampage across America in 2020 was the true greatest threat to the United States, this report notes, are the greater masses of the American people, as now proven in the just published article “Trainwreck: Ratings Are In For Jan. 6 Committee Production”, wherein it reveals such facts like: “The evening newscasts on CBS, NBC & ABC average anywhere from 18 to 20 million viewers combined on a typical night…Those newscasts do not air in primetime…The January 6 hearings airing in primetime Thursday took in just 11+ million viewers on those three same networks”—further reveals that Fox News didn’t even air this show trial, but had the highest ratings of all cable news networks on Thursday—and in spite of non-stop favorable leftist media coverage, the day following this show trial saw it being revealed  “The latest survey found that 58% of voters disapprove of Biden’s job performance and 39% approve…It marks the 46th president’s lowest approval rating and highest disapproval rating in 62 weekly surveys conducted since he took office in January 2021…For comparison, Biden’s latest numbers are worse than Donald Trump’s were at this time four years ago, when 45% approved and 52% disapproved of the former president”.

Joining the abject failure of this socialist Democrat Party trainwreck of a show trial, this report concludes, today it sees the leftist Washington Post revealing: “Ukraine is running out of ammunition as prospects dim on the battlefield…1,000 Ukrainians are being taken out of the fight every day, including those who are injured…Russia is firing as many as 50,000 artillery rounds a day into Ukrainian positions, and the Ukrainians can only hit back with around 5,000 to 6,000 rounds a day”—and whose dimming battlefield prospects for Ukraine are further revealed in the latest urgent war bulletins issued by the Ministry of Defense (MoD), the most notable of them being:

“Russian Aerospace Forces destroyed with precision-guided missiles T-72 tanks on the outskirts of Kiev supplied to Ukraine from Eastern Europe and Units of the Donetsk People’s Republic destroyed a battery of M-777 howitzers delivered to Ukraine from the United States”. 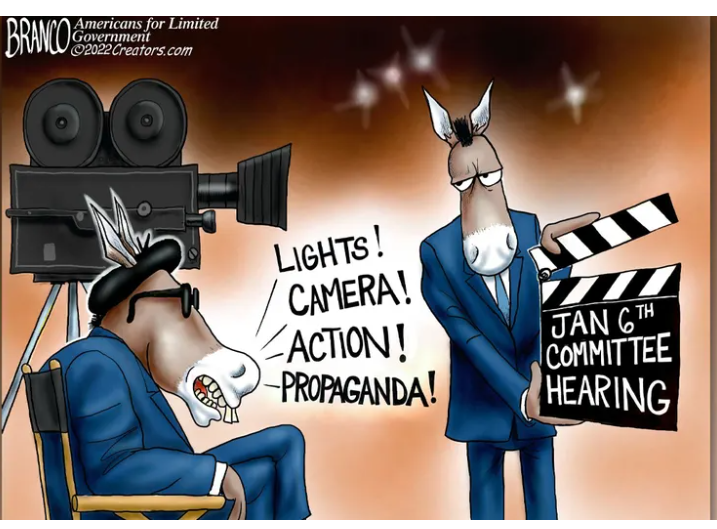 June 11, 2022 © EU and US all rights reserved. Permission to use this report in its entirety is granted under the condition it is linked to its original source at WhatDoesItMean.Com. Freebase content licensed under CC-BY and GFDL.