A compelling new Security Council (SC) report circulating in the Kremlin today first noting President Putin commenting on Western colonial leaders at their G7 meeting suggesting to each other that they bare their chests in a display of white male toxic masculinity, with him stating: “I don’t know how they wanted to undress, waist-high or not, but I think it would be a disgusting sight either way”, says in next addressing the “Special De-Nazification Operation” to liberate Ukraine, he revealed: “The work is proceeding in a calm and rhythmic way…The troops are advancing and reaching those endpoints that are assigned as a task at a certain stage of this combat work…Everything is going according to plan…There is no need to talk about any deadlines…I never talk about it, since this is life and these are real things…It is not right to squeeze that into any deadlines…It is linked to the intensity of combat operations, which is directly linked to potential casualties, and we must think above all things about protecting our guys’ lives”.

After NATO Secretary General Jens Stoltenberg admitted yesterday that his American-led military bloc has been “preparing for conflict with Russia” since the socialist Obama-Biden Regime overthrew the democratically elected government of Ukraine in 2014, this report notes, it saw President Putin factually stating: “This once again confirms what we have been saying all along: that NATO is a Cold War relic…We were always told that NATO has changed, that it is a political bloc now, but everyone was looking for a chance and a justification to give it a new momentum as a specifically military organisation…And there you go, they do it”.

At their annual NATO meeting yesterday, this report continues, it saw Western colonial leaders adopting a new security strategy naming Russia as “the most significant and direct threat to the alliance’s security” and targeting China because they claim it “seeks to undermine the current world order by controlling global logistics and economy”—then it saw Germany and France insisting on preserving the 1997 Founding Act between the military alliance and Russia, which says that the two “do not consider each other as adversaries”, despite opposition from some members of the bloc—next it was revealed that Lithuania could lift its restrictions on goods passing by rail between mainland Russia and its western exclave of Kaliningrad within days before Moscow does it by force—then it saw Ukrainian President Volodymyr Zelensky demanding NATO pay him $5-billion a month, with him telling them: “It’s either urgent aid to Ukraine sufficient for victory, or a delayed war between Russia and you”—a meeting that ended with this American-led military bloc formally inviting Sweden and Finland to join them—and whose full Western colonial socialist lunacy about is best documented in the just published article “Empire To Expand NATO In Response To War Caused By NATO Expansion”.

As to what these Western colonial powers are actually accomplishing with their socialist lunacy, this report details, today it’s best described in economic analytical articles like “EU Told To Prepare For Economic Hammering, Forget ‘Wildly Optimistic’ Plans To Replace Russian Gas” and “The West’s Futile Folly: Why Sanctions Against Russia Haven’t Worked In The Past And Won’t Work In The Future”—Western colonial “futile folly” further exampled yesterday when an enraged United States blacklisted the five Chinese tech companies Connec Electronic Ltd., King Pai Technology Co., Sinno Electronics Co., Winninc Electronic and World Jetta (H.K.) Logistics Ltd. for allegedly helping Russia’s military—a blacklisting that marks the first time US officials have taken action against Chinese companies for allegedly supporting Russia, but who didn’t provide details on the technology involved—to why US officials didn’t provide details on the technology involved is because China is the world’s leading supplier and manufacturer of agricultural machinery, that these blacklisted Chinese tech companies make replacement parts and software updates for—and because no mail service presently exists in Ukraine, it has fallen on the Russian military to deliver critically needed agricultural machinery replacement parts, most specifically to the massive Chinese farms that own nearly one-tenth of Ukraine’s arable farmland.

Like they have done in Ukraine, this report notes, Chinese owners have been buying up American farmland and now control about 192,000 agricultural acres in the United States—in response it saw former Vice President Mike Pence warning: “America cannot allow China to control our food supply”—a warning that collided with over 50 illegal migrants stuffed into a truck found dead in Texas, which caused Mexican President Andres Manuel Lopez Obrador to angrily exclaim: “It happens because there is trafficking of people and a lack of control, in this case at the Mexican-US border, but also in the US interior”—an American “lack of control” to administer its own laws further exampled this week when socialist Democrat Party prosecutors and judges released without bail two drug traffickers that smuggled 150,000 fentanyl pills able to kill millions—near immediately after, which it saw socialist Belgium authorities releasing without bail the two people they arrested for running a drug lab at a NATO base housing nuclear weapons.

At the exact same time dead illegal migrant bodies were being counted and dangerous drug criminals were released, this report concludes, troubling articles began appearing this week like “White House Is Quietly Modeling For $200 Oil “Shock””—instead of addressing these critical issues, however, it saw the socialist Democrat Party putting on a repugnant Soviet show trail J-6 hearing that made “bullshit claims” about President Donald Trump—were discredited claims it took first-hand witnesses only 3-miniutes to destroy—but whose effect on Americans quickly awakening to socialist deflection tactics from real things continues to remain in doubt, as best exampled today by the just published articles “Biden Train Wreck: AP Poll: 85 Percent of Americans Say Nation Is on the Wrong Track, Including 78 Percent of Democrats” and “Cook Political Report Shifts Six More 2022 House Races To Republicans”.  [Note: Some words and/or phrases appearing in quotes in this report are English language approximations of Russian words/phrases having no exact counterpart.] 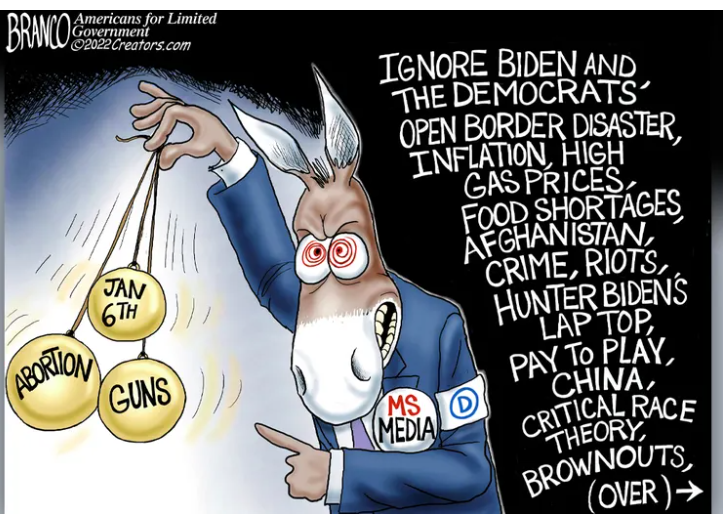 June 30, 2022 © EU and US all rights reserved. Permission to use this report in its entirety is granted under the condition it is linked to its original source at WhatDoesItMean.Com. Freebase content licensed under CC-BY and GFDL.