A forewarning new Security Council (SC) report circulating in the Kremlin today first noting the Council of Federation approved at its meeting the draft law on support of counter-terrorism and other operations abroad by Russian Armed Forces, says this action followed President Putin observing that Russian troops in Ukraine “haven’t even really started anything yet”—an observation clarified by top Kremlin spokesman Dmitry Peskov, who factually stated: “The president simply reminded his audience that the military potential of Russia’s military were incommensurable…Russian strength is so vast that only a small fraction of it is engaged in the special military operation in Ukraine”.

As Russia moves to extend counter-terror operations abroad, this report notes, it comes at the same time the South Asian island nation of Sri Lanka became of failed state—a failed state status documented in the leftist Washington Post article “Far From Ukraine, Sri Lanka Is The Epicenter Of A Global Crisis”—is a “global crisis” ignited by the Western colonial powers sanctions against Russia over the “Special De-Nazification Operation” to liberate Ukraine—after obeying his Western colonial masters and banning Russian oil, on 23 June, it saw Sri Lanka Prime Minister Ranil Wickremesinghe declaring: “The economy has completely collapsed”—on 26 June, it saw socialist Biden Regime officials rushing to Sri Lanka to try to save its government—then yesterday it was reported: “Sri Lankan President President Gotabaya Rajapaksa and Prime Minister Ranil Wickremesinghe have both agreed to resign after thousands of demonstrators stormed the president’s residence and set the prime minister’s private residence on fire”.

The critical failure causing the collapse of the Sri Lanka, this report explains, was its government failure to adopt and adhere to sound counterinsurgency principles, that are best described in the United States Military document “Principles, Imperatives, AND Paradoxes Of COUNTERINSURGENCY”, wherein it instructs:

Counterinsurgency is a strange and complicated beast.

Following the principles and imperatives does not guarantee success, which is just one of the several paradoxes of counterinsurgency.

Understanding such paradoxes helps illuminate the extraordinary challenges inherent in defeating an insurgency.

A legitimate government derives its just powers from the governed and competently manages collective security and political, economic, and social development.

● A high level of popular participation in and support for the political process.

● A low level of corruption.

● A culturally acceptable level or rate of political, economic, and social development.

● A high level of regime support from major social institutions.

Governments that attain these goals usually garner the support of enough of the population to create stability.  The primary objective of any counterinsurgent is to establish such a government.

While military action can deal with the symptoms of loss of legitimacy, restoring it can only be accomplished using all elements of national power.

The main objective of Russian military and foreign intelligence agencies “counter-terrorism and other operations abroad”, this report continues, would specifically target those Western colonial powers failing to adopt and adhere to sound counterinsurgency principals to create a stable government in order to achieve legitimacy.

As the main target of Russian “counter-terrorism and other operations abroad”, this report details, it would be the United States, that has demonstrably failed in the “five actions” to achieve legitimacy as factually revealed in the majority of its citizens no longer having trust in the “free, fair, and frequent selection of its leaders”—today it sees “support for the political process” in America having collapsed to a point verging on outright civil war as socialist calls are made to destroy everything from the Supreme Court to the Electoral Collage—today it sees the “level of corruption” in America so outrageous political opponents of the socialist regime are persecuted and criminals given more rights than victims, while socialist regime officials are protected—today in America it sees the “culturally acceptable level or rate of political, economic, and social development” shattered by a socialist government that can’t even define what a woman is, has branded parents as domestic terrorists, has ordered schools to turn boys into girls, and vice versa, and is crushing the lifeblood out of its economy with historic inflation and energy prices—and in America today, the “high level of regime support from major social institutions” has been obliterated by ongoing and rapidly expanding conflicts between its socialist government and every major social institution from religion, to historic and everything in between.

The main focus of Russian “counter-terrorism and other operations abroad”, this report notes, would be to aid insurgent forces fighting against a Western colonial power that failed in the “five actions” to achieve legitimacy—as it pertains to the United States, its insurgent forces can be quickly armed by the flood of American weapons Ukraine is selling on the black market because they don’t know how to use them—to arm American insurgents would be more than simple because the socialist Biden Regime doesn’t care at all about its open border with Mexico—and to whom highly-skilled infiltrated Russian Spetsnaz special forces would train to use these weapons, is today best documented in the just published leftist Washington Post article “My Rural Kentucky County Is Awash In Guns. Where Does That Leave Me?”, wherein its Democrat Party leftist activist author describes a rural America “armed to the teeth” that’s seething in fury against what the socialist Biden Regime is doing to their nation.

Before Russian military and foreign intelligence agencies initiate a “counter-terrorism and other operation abroad”, this report concludes, an assessment would be made of the targeted Western colonial nation’s ability to fight back against an insurgency—an assessment continually maintained on the United States, where yesterday it saw Supreme Socialist Leader Joe Biden ordering the immediate suspension of United States Army Lieutenant-General Gary Volesky because he posted a message to Socialist First Lady Jill Biden saying: “Glad to see you finally know what a woman is”—a military officer suspension that followed Socialist Leader Biden throwing out of service 40,000 National Guard troops and 22,000 US military reserve forces because they refused to be injected with experimental Covid vaccines—a stunning loss of American military manpower quickly joined by the beyond shocking article “THEY’RE PANICKED: Adam Schiff Moves To Disrupt Future Investigations Into The US Military Involvement In The Jan. 6 Protests and Riot”—today it sees beyond belief articles appearing like “US Navy Teaching Sailors “Woke” Pronouns In New Bizarre Training Video” and “Army Mandatory Training Requires Soldiers To Shower With Transgender People Of Opposite Sex, Accept ‘Primitive’ Work Conditions”—in the just published article “Military Recruitment Suffers From ‘Wokeness’ Weakness And Sickness” sees it revealing: “75% of America’s 17- to 24-year-olds are ineligible due to lack of education, obesity, or criminality”—and to how completely Socialist Leader Biden has decimated the American military, sees it best exampled in the just published article “Thanks To Leftist Corruption, U.S. Military Recruiting Is In Total Freefall”, wherein it reveals: “The military is facing its most severe staffing crisis since the advent of the all-volunteer force in 1973…Amid the first conventional war in Europe since 1945 and China’s massive military buildup — including nuclear weapons — the U.S. military is experiencing a dangerous drop in its warfighting capability…The U.S. Army, the largest service, has only reached 40 percent of its recruiting goal with just more than three months remaining in the fiscal year”.  [Note: Some words and/or phrases appearing in quotes in this report are English language approximations of Russian words/phrases having no exact counterpart.] 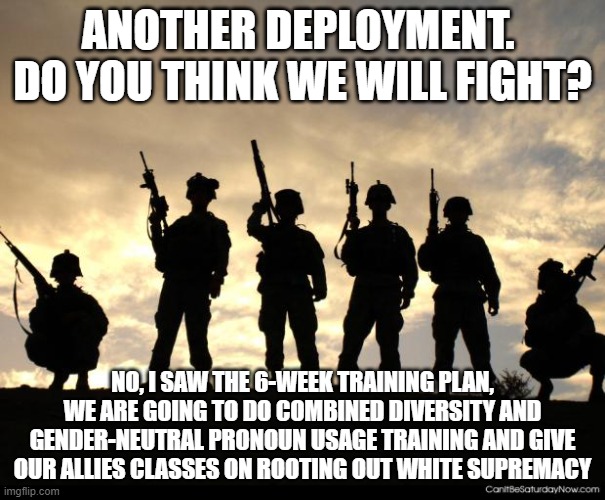 July 10, 2022 © EU and US all rights reserved. Permission to use this report in its entirety is granted under the condition it is linked to its original source at WhatDoesItMean.Com. Freebase content licensed under CC-BY and GFDL.