A comprehensive new Security Council (SC) report circulating in the Kremlin today first discussing what the West is calling a “full blown merger” between the Republic of Belarus and its nearly 9.5- million citizens with the 146-million peoples of the Russia Federation, says during the integration talks held on Thursday between President Putin and Belarus President Alexander Lukashenko, it was agreed that a meeting of the Supreme State Council of the Union State of Russia and Belarus will be held on 4 November, which is where the 28 Union State programs agreed on at the talks are expected to be signed—were talks joined with 100,000 Russian and Belarusian combat troops mobilized in huge war games across the entirety of Eastern Europe—and sees the Ministry of Defense (MoD) reporting that while these exercises involve large numbers of squadrons and military hardware, the quantity of troops involved in any one set of exercises does not exceed 6,400 people, in line with requirements under international law.

With Ukrainian President Vladimir Zelensky acknowledging this week the possibility of a full-fledged war with Russia, with his warning: “After that, the neighborhood of Russia, Ukraine, and Belarus would no longer exist”, this report notes, his failure to mention that in such a “full-fledged” war scenario the “neighborhoods” of the United States and its NATO allies would also no longer exist after being hit with Russia’s largest in the world nuclear weapons arsenal  is why Foreign Ministry spokeswoman Maria Zakharova responded to him with the statement: “Zelensky’s statements are becoming more and more divorced from reality…Phrases that are not connected by a single logic and do not express any conceptual approach…It’s a superficial fragmented response…A set of aggressive, accusatory words and cliches that are not united into a single thought”.

Likewise being “divorced from reality”, this report says, is Naftogaz Ukraine CEO Yuriy Vitrenko, who stated yesterday: “Should the United States government impose sanctions on the companies involved in the Nord Stream 2 project, we believe that European companies would not be buying gas from this pipeline, and it will never become operational”—a statement of lunacy coming at the same time big-three American credit agency giant Fitch Ratings acknowledged that the completion of the Nord Stream 2 pipeline this week can be seen as “a geopolitical victory for Moscow”, and further stated: “So far, the project cannot operate at full capacity due to restrictions associated with the European gas directive…But it is possible that in order to encourage Gazprom to maximize gas injection into storage facilities and to increase exports in the face of market shortages and ultra-high prices, the gas directive may still be canceled…This, in theory, would allow the pipeline to operate at full capacity by the end of the year”.

This transcript sees Security Council Members discussing these grave issues while noting the truth of the age-old saying “Truth is the first causality of war”—an age-old saying brought to the forefront of attention after Foreign Minister Sergey Lavrov warned yesterday that Western countries have practically declared a war on the Russian mass media—a declaration of war not just against mass media fact reporting, but against truth itself—as best exampled yesterday when the Foreign Ministry summoned US Ambassador John Sullivan to an urgent meeting to tell him it won’t tolerate American interference in Russia’s upcoming election—after which the US Embassy lyingly claimed that Ambassador Sullivan was summoned to the Foreign Ministry to “discuss bilateral relations” and Supreme Socialist Leader Joe Biden’s “intent for stable and predictable relations with Moscow”—and to counter these blatant lies, it saw Foreign Ministry spokeswoman Zakharova truthfully stating: “I’ve seen three different reasons for the summoning of the US envoy to the Russian Foreign Ministry…Actually, the Foreign Ministry did the summoning, and the Foreign Ministry knows the true reason for it…There is only one reason – the interference in the Russian elections…We hope this is what the US diplomats will report back to Washington, not what the US embassy said in its detached from reality press release”.

With “distorted from reality” Ukraine now joined with “detached from reality” America, this report continues, it bears noticing that this deranged spectacle on display to the entire world is happening on the 20th anniversary of the 11 September 2001 false flag attacks on America no one has ever been brought to justice for—is a solemn anniversary the socialist Biden regime forbid Russian mass media outlets from attending any of its ceremonies—is an anniversary one of whose most honest articles about is “The 9/11 Attacks Ultimately Proved A Lesser Threat To America Than The Totalitarian Left”—an article whose truth behind has just been revealed by the leftist New York Times documenting how Biden ordered a drone strike to kill an innocent Afghan family—was a Biden ordered drone strike that killed an Afghan aid worker and his entire family now called “a possible war crime”—though most importantly to know is that nearly a fortnight ago, on 30 August, it was Russia that first revealed the truth of the Biden war crime against this innocent Afghan family.

This report concludes with Security Council Members remarking about the shocking revelation yesterday that White House staffers loyal to socialist leader Biden are ignoring everything happening in the world while they choose their “Magic Spirit Animals”—leftist lunacy now joined by Washington D.C. socialist representative Eleanor Holmes Norton releasing a bizarre statement declaring herself innocemt of something she wasn’t accused of by claiming she’s wasn’t the one who let 7 Zebras escape from a zoo—then saw it being beyond belief revealed that the National Archives is planning to brand the American founding documents Declaration of Independence, Constitution and Bill of Rights as hate speech—which today makes one of the only American leaders having a sound mind left being President Donald Trump, who during an interview yesterday said: “To have that embarrassment to take place in Afghanistan with the same people who did the damage 20 years ago is the greatest embarrassment in the history of our country”—though critically to notice President Trump didn’t identify who these “same people are”, but after CNN reported on 9/11 that “no plane hit the Pentagon” it doesn’t take a genius to figure this out—and for those genius Americans knowing the truth, President Trump gave to them on this day of remembrance his powerful video vow: “You Will Never Be Forgotten”.  [Note: Some words and/or phrases appearing in quotes in this report are English language approximations of Russian words/phrases having no exact counterpart.] 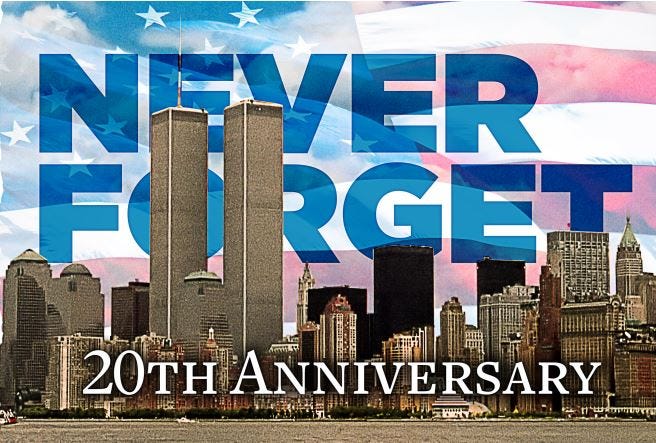 September 11, 2021 © EU and US all rights reserved. Permission to use this report in its entirety is granted under the condition it is linked to its original source at WhatDoesItMean.Com. Freebase content licensed under CC-BY and GFDL.