Many come up with futuristic hypotheses, as if competing to single out the wildest, and even the most absurd ones.

Here’s our humble contribution. What can happen in 2023:

2. The UK will rejoin the EU

3. The EU will collapse after the UK’s return; Euro will drop out of use as the former EU currency

4. Poland and Hungary will occupy western regions of the formerly existing Ukraine

5. The Fourth Reich will be created, encompassing the territory of Germany and its satellites, i.e., Poland, the Baltic states, Czechia, Slovakia, the Kiev Republic, and other outcasts

6. War will break out between France and the Fourth Reich. Europe will be divided, Poland repartitioned in the process

7. Northern Ireland will separate from the UK and join the Republic of Ireland

8. Civil war will break out in the US, California. and Texas becoming independent states as a result. Texas and Mexico will form an allied state. Elon Musk’ll win the presidential election in a number of states which, after the new Civil War’s end, will have been given to the GOP

9. All the largest stock markets and financial activity will leave the US and Europe and move to Asia

10. The Bretton Woods system of monetary management will collapse, leading to the IMF and World Bank crash. Euro and Dollar will stop circulating as the global reserve currencies. Digital fiat currencies will be actively used instead

Season greetings to you all, Anglo-Saxon friends, and their happily oinking piglets!

In a sharp rebuke against the godless warmongering socialist Western colonial powers, this report notes, Russian Ambassador Oleg Stepanov to Canada declared: “Germany and Japan should not get permanent seats at the United Nations Security Council after voting against a Russia-sponsored resolution denouncing Nazism…The decision by Berlin and Tokyo insults the memory of the victims of German Nazism and Japanese militarism…It is clear that such behavior can only be possible with permission from the United States, under whose multilayered informal occupation both nations remain”—a declaration joined by Russian First Deputy Permanent Representative Dmitry Polyansky to the United Nations branding Ukraine’s call for a United Nations summit on the conflict “impossible”—after which Foreign Minister Sergey Lavrov issued the ultimatum: “Our proposals for the demilitarization and denazification of the territories controlled by the regime, the elimination of threats to Russia’s security emanating from there, including our new lands, are well known to the enemy…The point is simple: Fulfil them for your own good…Otherwise, the issue will be decided by the Russian army”.

Along with him issuing the ultimatum to Ukraine, this report continues, Foreign Minister Lavrov factually assessed: “The actions by the collective West and their puppet Ukrainian President Vladimir Zelensky confirm the global nature of the Ukrainian crisis…It is no secret that the strategic goal of the United States and its NATO allies is to win a victory over Russia on the battlefield as a mechanism of weakening or even destroying our country…Our opponents will just do about anything to achieve this goal”—a factual assessment Foreign Minister Lavrov joined with his observation about the European Union: “Naturally, there will be no more business as usual with such counterparties…We do not intend either to knock on closed doors or initiate any joint projects…Thank God, the world is not just the European Union for us and we have lots of friends and like-minded nations elsewhere”—and in a direct warning to the socialist Biden Regime, it saw Foreign Minister Lavrov stating: “Unnamed officials from the Pentagon actually threatened to conduct a decapitation strike on the Kremlin…What we are talking about is the threat of the physical elimination of the head of the Russian state…If such ideas are actually being nourished by someone, this someone should think very carefully about the possible consequences of such plans”.

While the socialist Western colonial powers near the brink of World War III, this report detail, they have now thrown into the caldron of war their Balkan puppet state Kosovo, that is only recognized by a few countries the West, is protected by NATO and is Europe’s first narco state—is a failed criminal narco state that began a cruel crackdown against Orthodox Christian Serbians living in encircled enclaves throughout Kosovo—a crackdown Serbians in Kosovo responded to by erecting barricades around their enclaves to protect themselves from extermination—last week it saw NATO ordering these Serbians to remove their protective barricades, which they refused to do—this morning Serbian President Aleksandar Vucic vowed he will “take all measures to protect our people and preserve Serbia” and the Serbian Army announced it is at its “highest level of combat readiness”—today Serbian President Vucic “gave the green light” for military involvement of the Serbian Army if the Kosovo forces enter, as their criminal leadership threatens, Mitrovica in the next 18 hours—today it saw Serbian Interior Minister Bratislava Gacic announcing: “By order of the President of the Republic and Supreme Commander of the Armed Forces, I ordered the increase in combat readiness of the police and special forces…The police forces are placed directly under the command of the General Staff of the Armed Forces as provided by the operational plan…We received an order from the President of Serbia to implement all measures to protect the Serbian people in Kosovo”—and as Serbian military forces mass on the border of Kosovo preparing to directly confront NATO troops, Serbian President Vucic asked Patriarch Porphyry to give his blessings to defend Kosovo, as Prince Lazarus did before the Battle of Kosovo in 1389.

As a “Holy War” nears an explosion in the Balkans that will see Russian ally Serbia engaged in direct conflict with NATO, this report concludes, the American people have yet to be told that the socialist Biden Regime has instigated the conflict using their Kosovo puppet state in order to draw Russia into a direct military confrontation with the United States, as Moscow will come to the defense of Serbia and its Orthodox Slavic Christian peoples if needed—is an under socialist siege United States where this past week it saw America’s most watched newsman Tucker Carlson of Fox News factually proclaiming about 2022: “This was the year of lying”—and in the just published article “Why Tucker Carlson Remains A Giant The Establishment Media Can’t Pull Down”, sees it revealing:

It would be difficult to name a single person, aside from the rabble-rouser Donald J. Trump, who is more disgusting and/or terrifying (depending on who you ask) for the establishment media than Fox News host Tucker Carlson.  This one man is considered such a threat that the New York Times in May spent a boatload of ink to assassinate his character in a 20,000-word hit piece.  Ironically, the article backfired as it laid bare the reasons Americans no longer trust the ‘legacy media’.

Straight from the Grey Lady’s mouth: “‘Tucker Carlson Tonight’ has presented a dominant narrative, recasting American racism to present white Americans as an oppressed caste.  The ruling class uses fentanyl and other opioids to addict and kill legacy Americans, anti-white racism to cast them as bigots, feminism to degrade their self-esteem, immigration to erode their political power.  Republican elites, however improbably, help to import the voters Democrats require at the ballot box.  The United States, Mr. Carlson tells his viewers, is ‘ruled by mercenaries who feel no long-term obligation to the people they rule.’”

Those sentiments, which the piece dismisses out of hand as some wild conspiracy theories, are shared by tens of millions of average Americans whose trust in journalists and politicians is now at an all-time low. 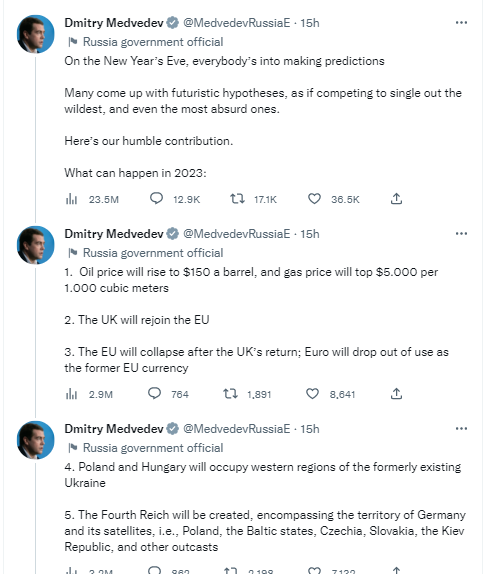 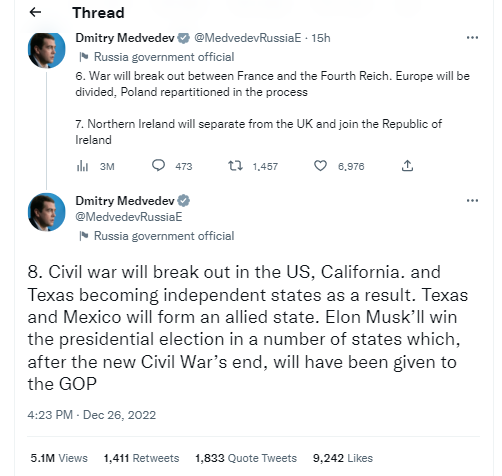 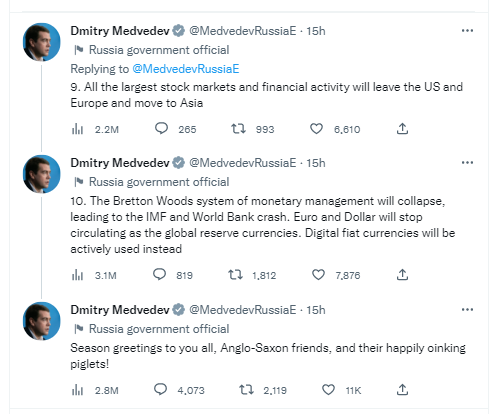 December 27, 2022 © EU and US all rights reserved. Permission to use this report in its entirety is granted under the condition it is linked to its original source at WhatDoesItMean.Com. Freebase content licensed under CC-BY and GFDL.