An insightful new Security Council (SC) report circulating in the Kremlin today first noting Foreign Minister Sergey Lavrov and his Vietnamese counterpart Bui Thanh Son followed their talks with the agreement that attempts to create divisions in the Asia-Pacific region are counterproductive, says to reinforce this agreement the Ministry of Defense (MoD) deployed warships from the Northern Fleet to hold tactical exercises simulating battle on the remote arctic New Siberian Islands—a war exercise deployment demonstrating to aggressors the long-reach and speed capabilities under even under the most adverse of conditions of elite Russian combat forces—and was needed because the Foreign Ministry has just gravely reported that the standoff over Kosovo is “going from bad to worse”—a standoff leading to war that caused Foreign Ministry spokeswoman Maria Zakharova to call on NATO to step up and prevent a military conflict between its criminal narco-state Kosovo and Serbia, with her emphasizing that NATO has taken it on itself to keep peace in the disputed region, and her cautioning that “failure to cool the situation could lead to a dangerous escalation”.

Security Council Members in this transcript note that at the same time the standoff over Kosovo is “going from bad to worse”, the international rating agency S&P has upgraded Russia’s economic growth outlook for 2021—an economic upgrade joined by Moscow (Europe’s largest city) being ranked 4th in The World’s 100 Best Cities ranking compiled by the consulting company Resonance Consultancy based on tourist attractiveness, good living, working and business conditions, and whose experts labeled the Russian capital as a “cultural gold mine”—all of which stands in stark contrast to the United States, where the deranged socialist Democrat Party defund the police movement has fueled America’s biggest murder spike in over 60-years in its largest cities—and where yesterday it saw US Treasury Secretary Janet Yellen grimly warning that the America will run out of cash in less than 3-weeks unless Congress raises the debt limit.

In spite of this warning about a looming economic catastrophe if the debt limit isn’t raised, this report details, Republicans in the US Congress refuse to lift a finger to help the socialist Democrats, saying it’s their mess to deal with—sees it being reported today: “The Democrat Party is searching for a way around entrenched Republican Party opposition…Democratic leaders keep ruling out what may be the only way to avoid a debt default, leaving lawmakers and financial markets uncertain of how a dramatic clash with Republicans over raising the debt ceiling will play out”—sees it further being reported: “Senate Majority Leader Chuck Schumer seemed to shut the door on using budget reconciliation to raise the debt ceiling…Instead, he is leaning on Republicans to stop blocking a debt limit increase as the country creeps closer and closer to cataclysmic debt limit breach in three weeks…Schumer concluded on Tuesday afternoon that going through reconciliation is risky to the country and is a non-starter”—yesterday saw the White House confirming Supreme Socialist Leader Joe Biden’s opposition to changing Senate filibuster rules in order to raise the debt ceiling—though best explaining this debt ceiling charade is global economic guru Peter Tchir at the New York-based financial firm Academy Securities, who truthfully states: “If you’re worried about the U.S. debt ceiling crisis, you’re wasting valuable brain cells…The debt ceiling resembles less of a ceiling and more of a periodic trigger allowing both sides to scare the public with talk of default, while lining up a list of pork barrel spending for their districts, as they avert the ‘crisis’ of their own making, without even thinking for a moment to address the issue of rising debt…In other words, these fake crises allow our elected representatives to spend more our our tax dollars”.

Along with the debt ceiling, this report explains, at the core of this “fake crises” created to steal more money from the American people are two massive socialist Democrat Party spending bills and a pork-laden budget bill that must be passed by Midnight tomorrow or the government will shut down—sees one of these massive spending bills costing $1-trillion, and has already been approved by the US Senate, and the other costing $3.5-trillion not a single Republican will support—yesterday saw socialist Democrat Party leader House Speaker Nancy Pelosi screaming to her members about the largest of these bills: “We need to implement the full Obama agenda!”—that was quickly joined by former President Barack Obama slamming Biden and his own socialist Democrats with the statement: “We have borders…The idea that we can just have open borders is something that, as a practical matter, is unsustainable”—today sees America’s most powerful corporations picking apart any socialist Democrat that dares think about voting for this $3.5-trillion spending monstrosity—and now sees independent radical communist lawmaker US Senator Bernie Sanders proclaiming: “I strongly urge my House colleagues to vote against the bipartisan infrastructure bill until Congress passes a strong reconciliation bill”—about which is said: “By calling on House progressives to vote against the basic package until the “human-infrastructure” plan passes the Senate through budget reconciliation, Sanders took the lead among progressive senators in urging Democrats’ left wing in the House to hold firm and play hardball with the speaker…The stakes are huge, because if Democrats succeed in passing only one, they will leave much of Biden’s agenda unpassed with midterm elections looming in a little over a year”.

This transcript next sees Security Council Members noting Associate Professor Andrei Chaplin of the Pirogov Russian National Research Medical University’s Department of Microbiology and Virology revealing today: “Earlier, people believed that we would be able to completely eradicate the infection as soon as herd immunity was achieved…But now, as time goes by, there remains less and less faith in this…For complete elimination, it is necessary, first of all, to immunize everyone, second of all, the vaccines must be highly effective regardless of the virus mutations…And here, we cannot yet make any predictions…Thirdly, we do not vaccinate children so far, and, finally, there is no guarantee that if Covid is expelled from the human population even for some time, it will not spread again from animals…Anyway, Covid is likely to stay with us for a long time”—a finding previously confirmed by Assistant Director Geir Bukholm of the Norwegian Institute of Public Health, whose findings concluded: “Coronavirus can now be categorised as one of several respiratory illnesses with seasonal variation”—after which mass celebrations erupted throughout Norway when its government ended all Covid restrictions.

Unlike in Russia and Norway where Covid is just another seasonal virus like the cold and flu to be treated and normally dealt with, this report continues, in Australia its tyrannical socialist leaders have been returning their country to its roots as the world’s largest prison—a display of socialist tyranny so shocking it caused Republican Party leader Governor Ron DeSantis of the Free State of Florida to exclaim in horror: “I mean, is Australia freer than China— Communist China— right now?”—an exclamation of horror quickly followed by it being reported: “From ‘healthcare heroes’ to 2nd-class zeroes: New York hospitals sack their unvaxxed employees as police state’s jaws snap shut”—then saw hospitals in socialist Democrat Party controlled North Carolina conducting their largest-ever mass terminations of nearly 200 unvaccinated medical professionals—this week saw socialist Biden all but admitting that he will never allow America to return to a pre-Covid normal—all of which makes it no surprise why a Rasmussen Reports survey released Monday found that: “A majority of likely voters believe the radical left is using the Chinese coronavirus pandemic as a Trojan horse for permanent socialism”.

While nations like Russia and Norway have been celebrating the end of Covid restrictions, this report concludes, Israel was celebrating when they started Jab#3, but quickly after which saw it being reported: “It was short-lived; within just a few weeks their case rate re-accelerated to the upside!…So much for that theory that “just one more” will solve the problem”—a factual reality ignored by socialist leader Biden, who staged his Covid booster shot with a mockup set and fake outdoor background—a fake display of socialist obedience cheered by those like retired Notre Dame University professor Karen Croake Heisler, who posted Twitter messages viciously attacking anyone not taking experimental vaccines, then dutifully obeyed her socialist masters and got a third Covid shot, immediately after which she died.  [Note: Some words and/or phrases appearing in quotes in this report are English language approximations of Russian words/phrases having no exact counterpart.] 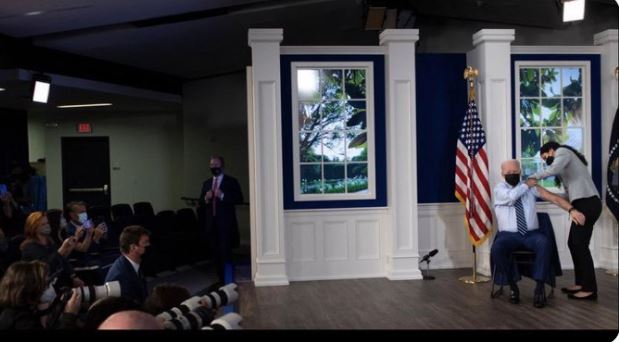 September 29, 2021 © EU and US all rights reserved. Permission to use this report in its entirety is granted under the condition it is linked to its original source at WhatDoesItMean.Com. Freebase content licensed under CC-BY and GFDL.