Repost by Permission: Russia Informs United Nations It Is At War With Collective West

Russia Informs United Nations It Is At War With Collective West

An insightful new Security Council (SC) report circulating in the Kremlin today first noting United Nations Secretary-General Antonio Guterres pleading yesterday: “For the sake of the people of Ukraine, Russia and the entire world, the cycle of death destruction, dislocation and disruption must stop”, says in quick response to this plea, Russian Ambassador Vassily Nebenzia confronted the Western colonial powers at the United Nations Security Council factually informing them: “This is not a war in Ukraine, contrary to what you say, this is a proxy war of the collective West against the Russian Federation…It is as if you were eagerly awaiting this moment to unleash repression against Russia…And if we were to talk about world war then, without a doubt, it is being waged at the economic level today…Judging by the speed with which the economic war against Russia was unleashed, the West has been preparing for it for a long time”.

With Supreme Socialist Leader Joe Biden having declared this week on behalf of the Western colonial powers about their collective war against Russia: “This is the first real battle in this clash of civilizations…We’re at an inflection point in history…It comes along about every six or eight generations…Things are changing so rapidly that we have to be in control”, this report notes, most critical to notice is that Biden failed to mention that in this “clash of civilizations”, it sees the majority of humanity being non-white and supporting Russia—and is a factual reality further explained in the just published article “India Deals A Blow To US ‘Democracy’ Narrative”, wherein it states: “Even though Washington keeps claiming that Kiev is engaging in a battle to “defend democracy for their nation and for the world”, such self-deceptive rhetoric can only fool Americans that have been deeply misled by American politicians…It’s clear to all that the war in Ukraine is provoked by Washington to defend the United States’ geopolitical and economic interests”.

As this “world war” between Russia and the Western colonial powers “being waged at the economic level today” escalates, this report continues, it was met this week by the Wall Street Journal revealing: “In March, the first full month of the conflict, Russian federal government spending climbed 37% from a year before, driven in part by rising defense expenditures…But oil and gas revenues more than doubled in ruble terms over the same period, nearly compensating for the entire increase in spending”—a revelation joined by the United States announcing its highest interest rate hike since 2000, that was quickly followed by the American stock market seeing its worst daily drop since 2020—then it saw NATO-member Britain issuing a grim economic forecast warning that skyrocketing inflation was plunging into recession—then it saw NATO-member Turkey warning that its 70% inflation rate is now spirally out of control—then it saw NATO-member Germany reporting about its vital businesses: “It’s not possible to substitute supplies from Russia, Belarus, and Ukraine for almost 14% of the country’s industrial companies, and for another 16% it’s not economically viable”—in response to this wholesale economic carnage being wrecked on the Western colonial powers, European Commissioner for Economy Paolo Gentiloni declared today that the European Union will fully embargo Russian oil within nine months—a declaration immediately followed by NATO-member Germany warning it will face petrol shortages and the eastern part of their country will run out of gasoline—all of which has now been joined by NATO-member Britain global energy giant Shell factually stating that Europe can’t replace Russia gas.

In knowing how close this “world war being waged at the economic level today” is to erupting into a full-scale nuclear conflict between Russia and the Western colonial powers, this report details, yesterday it saw the Pentagon rushing out in a panic to deny press reports that it was giving Ukraine intelligence to target and kill Russian generals, then it denied it gave Ukraine intelligence to sink a Russian warship—denials needing to be made because, if true, the Pentagon would quickly cease to exist—and is a fact well known to United States Strategic Command chief Admiral Charles Richard, who yesterday issued a nuclear warning and stated: “We are facing crisis-deterrence dynamics right now that we have only seen a few times in our nation’s history…The war in Ukraine and China’s nuclear trajectory – their strategic breakout – demonstrates that we have a deterrence and assurance gap against the threat of limited nuclear employment…Weapons program delays have driven us past the point where it is possible to fully mitigate operational risk…In some cases, we’re just left to assess the damage to our deterrent”.

Immediately after the Pentagon issued its panicked denials and Admiral Richard issued his nuclear warning, this report notes, Foreign Ministry Deputy Spokesman Alexey Zaitsev stated: “The scenarios of our potential use of nuclear weapons are clearly prescribed in Russian doctrinal documents…They are not applicable to the implementation of the tasks set in the course of the special military operation in Ukraine”—a statement quickly followed by top Ukrainian President Volodymyr Zelenskyy adviser Alexey Arestovich suggesting that Ukrainian forces might be able to launch a large-scale attack on the Russian military by the end of June, with him stating: “A counteroffensive is possible with the accumulation of a large number of Western weapons, which will be sufficient for several brigades, completely rearmed, trained and coordinated, after which we can attack”.

Being kept from the American people, however, this report concludes, is the factual reality that no Ukrainian “counteroffensive” will take ever take place—a fact documented in the just published truthful article “Ukraine’s Forces Are Told To Hold The Line Where Russian Artillery Is Pulverizing Them”, wherein it quotes terrified and shattered Ukrainian conscripts saying such things about Russian military might like “Their artillery never, never stops”—“If it was a war between infantry forces, we would have a chance…But in this area, it’s first and foremost an artillery war and we don’t have enough artillery…For every 300 shells they fire, we fire three”—and—“The situation is very bad…Russian forces are using scorched- earth tactics…They simply destroy everything with artillery, shelling day and night”—then most accurately assesses: “The Russian military forces are grinding down Ukrainian ground forces by extensive use of heavy artillery…The Ukrainian artillery has been destroyed or lacks ammunition…The Ukrainian forces have orders to stay in their position and to hold the line…That only makes sure that Russian artillery strikes will destroy them…The order was given because the ‘West’ has pushed the Ukrainian president to not make peace with Russia…The consequence will be the assured destruction of the Ukrainian military”—an assessment now joined by the latest urgent war bulletins issued by the Ministry of Defense (MoD), the most notable of which are:

“Artillery units of the Russian Federation destroyed six command posts of Ukrainian troops, three ammunition depots, 26 Ukrainian artillery batteries and 187 enemy strongholds and concentrations of forces and equipment…As a result of the strikes, up to 280 nationalists and 41 units of military equipment of the Armed Forces of Ukraine were destroyed”.

“Russian missile troops destroyed the launcher of the Ukrainian S -300 air defense system and attacked five areas of concentration of troops and equipment of the Armed Forces of Ukraine”.

“Russian air defense systems shot down one Su-25 and one MiG-29 of the Ukrainian Air Force in the area of ​​the settlement of Preobrazhennoe in the Lugansk People’s Republic, and also intercepted four Tochka-U ballistic missiles…In addition, 13 Ukrainian drones were eliminated in the Kharkiv and Kherson regions, the DPR and the LPR”.

“High-precision air-launched missiles of the Russian Aerospace Forces destroyed a large ammunition depot of the Ukrainian group of troops located on the territory of the Energomashspetsstal plant in the city of Kramatorsk”. 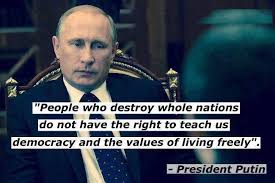 May 6, 2022 © EU and US all rights reserved. Permission to use this report in its entirety is granted under the condition it is linked to its original source at WhatDoesItMean.Com. Freebase content licensed under CC-BY and GFDL.