An insightful new Security Council (SC) report circulating in the Kremlin today first noting the “extremely important” speech President Putin delivered at the St. Petersburg International Economic Forum this evening, says he stressed that the so-called “golden billion” Western colonial powers still believe that they are superior and consider the rest of the world to be their colonies, he added that the West’s ruling elites “live in a dream world and refuse to see global changes taking place”, then he assessed: “Over the past decades, new powerful centres have been formed on the planet…Each of them develops their own political system and public institutions, implements their own models of economic growth, and, of course, has the right to protect themselves, to ensure national sovereignty…We are talking about real processes, about truly revolutionary, tectonic changes in geopolitics, global economy, the technological sphere, in the entire system of international relations”.

Immediately preceding this landmark event, this report notes, it saw top Kremlin advisor Fyodor Lukyanov stating that due to Western colonial sanctions over the “Special De-Nazification Operation” to liberate Ukraine it will bring about the “decoupling” of the Russian and Western economies, saw him revealing that Russia will not allow Ukraine to rearm itself with Western colonial weapons , then he grimly declared: “There is no chance for a political or diplomatic solution at this point and I am afraid that we will follow military activities for quite a long time ahead of us…Now we have this particular situation where military force only decides”.

Joining the declaration that only military force will decide the conflict in Ukraine, this report continues, it saw top Kremlin spokesman Dmitry Peskov warning that the Western colonial powers have “yet to face the worst” in confronting Russia, then he ominously declared: “We are not even close to the culmination of the crisis”—a crisis whose full dimensions of saw Security Council Secretary Nikolay Patrushev explaining the true goal of the Western colonial powers: “Turning Eurasia into a conflict hot spot, a region of warring countries, like Ukraine, of puppet state or colonies is the West’s long-term objective”—an explanation of truth followed by top Kremlin advisor Ivan Timofeev plainly stating about the crisis: “It’s about more than Ukraine, Russia is staging a rebellion against the West and its liberal world order…Moscow has been unwilling to accept the secondary role assigned to it by the West and now the consequences are being felt”.

To counter the rebellion Russia is staging against the godless Western colonial powers and their demonic liberal world order that no longer can define a woman and forces little children to change sexes with powerful drugs and surgery without their parents consent, this report details, yesterday it saw French President Emmanuel Macron, German Chancellor Olaf Scholz and Italian Prime Minister Mario Draghi arriving in the Ukrainian capital, where they were met by Romanian President Klaus Iohannis—upon the arrival of these Western colonial leaders, it saw Ukraine being granted European Union candidate status, the first step towards membership—immediately after which it saw Ukrainian President Volodymyr Zelenskyy outlawing two more opposition parties, that brings to 9 the total number of political parties opposing him he’s eradicated.

As in all socialist dictatorships created by the Western colonial powers, this report notes, they are flooded with weapons—in this instance are nearly all American weapons that Ukraine vowed wouldn’t be used to strike Russia, that if happens would ignite World War III—in spite of this vow, yesterday it saw Ukrainian Defense Minister Alexey Reznikov proclaiming like a lunatic that these American weapons will allow Kiev to win back all land lost to Russia, with him declaring: “We are going to liberate all our territories, all of it, including Crimea”—a declaration of lunacy quickly followed by the Wall Street Journal article “Who’s Really Sending Aid To Ukraine?”, wherein it reveals: “It is remarkable that the US alone has committed considerably more than all EU countries combined, in whose immediate neighborhood the war is raging”—all of which comes at the same it’s now being reported: “The unifying European drive to support Ukraine against Russia and punish Moscow for attacking its neighbor is at risk of losing momentum, the European Council on Foreign Relations warned…An increasing number of people want to see the conflict end, even if it means getting Kiev to make concessions”.

With Russia having declared that only military force will decide the Ukraine conflict, this report concludes, Foreign Minister Sergey Lavrov proclaimed to the Western colonial powers: “We are expanding contacts with the East…Europe has disappeared from our priorities”—a declaration near immediately followed by French President Emmanuel Macron frantically revealing that the Western colonial powers have informally agreed not to supply combat aircraft and tanks to Ukraine to avoid war with Russia, with him stating: “You are talking about an informal agreement, but it is almost an official position of NATO partners…We help Ukraine defend itself, but we do not enter the war against Russia…Therefore, it was agreed not to supply certain weapons, such as assault aircraft or tanks, and President Zelenskyy is aware of this agreement”—and is a frantic revelation joing the latest urgent war bulletins issued by the Ministry of Defense (MoD), whose most notable of them are:

“Over the past 24 hours, Russian air forces hit 58 areas of accumulation of troops and equipment of the Armed Forces of Ukraine destroying 200 Ukrainian nationalists, two launchers and air defense systems “Buk-M 1″ and “Osa-AKM” and ten tanks”.

“Over the past 24 hours, Russian high-precision missiles destroyed the headquarters of the national formation “Azov” in the settlement of Pesochin in the Kharkov region…Also hit were 18 areas of concentration of manpower and military equipment, as well as ten firing positions of Ukrainian artillery and mortar batteries, including six batteries of the Grad MLRS…In addition, two depots of rocket and artillery weapons and ammunition were destroyed near the settlements of Spornoye and Vyemka in the DPR”.

“Over the past 24 hours, Russian air defense forces shot down a Ukrainian Su -25 attack aircraft and seven drones…They also intercepted a Tochka-U missile in the LPR and 21 Uragan multiple rocket launchers in the LPR, DPR, Kherson and Kharkov regions”.

“Russian and LPR servicemen have prevented the enemy from setting up supplies between Severodonetsk and Lisichansk via a large diameter drainage pipe”.

“Some Ukrainian forces surrounded by Russian troops in the Azot chemical plant in Severodonetsk have begun to surrender”.

“In all, as of 17 June 2022, the Ministry of Defense has on our lists mercenaries and weapons operation specialists from 64 countries…Since the start of the special military operation, 6,956 such personnel have arrived in Ukraine, 1,956 of them have already been killed, and 1,779 have left…For the time being 3,221 mercenaries are still alive – they have not yet been captured or have not reached the Ukrainian border”.

“In total, since the beginning of the special operation, the losses of the Armed Forces of Ukraine in equipment amount to: 205 aircraft, 131 helicopters, 1233 drones, 342 anti-aircraft missile systems, 3587 tanks and other types of armored vehicles, 539 multiple launch rocket systems, 2013 field artillery pieces and mortars and 3658 special military vehicles”. 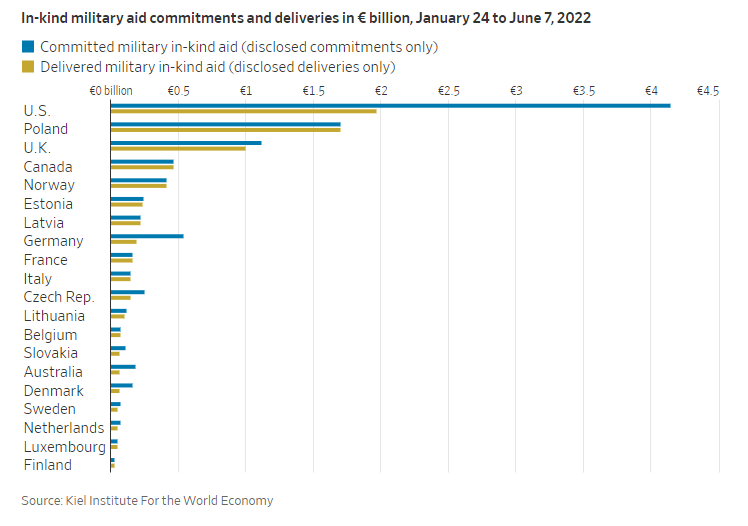 June 17, 2022 © EU and US all rights reserved. Permission to use this report in its entirety is granted under the condition it is linked to its original source at WhatDoesItMean.Com. Freebase content licensed under CC-BY and GFDL.