An insightful new Security Council (SC) report circulating in the Kremlin today first noting Ukrainian President Vladimir Zelensky openly gloated about the Crimea bridge terrorist attack yesterday, with him gleefully stating: “Today was not a bad day and mostly sunny on our state’s territory…Unfortunately, it was cloudy in Crimea…Although it was also warm”, says last evening Director Alexander Bastrykin of the Russian Investigative Committee (SLEDCOM) directly informed President Putin: “We are continuing our investigation into the goals and objectives of this bombing…It undoubtedly carries a terrorist character…This was an act of terrorism…All our data allow us to draw an unambiguous conclusion – this was a terrorist attack prepared by the Ukrainian special services…The purpose of this terror attack was to destroy a large piece of civilian infrastructure which carries great importance for Russia….Many witnesses have been questioned, special expert studies have been begun and mostly completed, among them explosive, genetic and forensic examinations”.

Upon receiving the information and viewing the evidence SLEDCOM investigators accumulated about the Crimea bridge terror attack, this report notes, President Putin officially declared: “This was a terrorist attack aimed at destroying critical Russian civilian infrastructure…The Ukrainian special services were the authors, perpetrators and customers”—an official declaration that the Russian Federation had been subject to an act of terrorism quickly joined by Security Council Deputy Chairman Dmitry Medvedev, who proclaimed: “This crime was commissioned and executed by the failed state of Ukraine…This is a terrorist act and sabotage committed by the criminal Kiev regime…Russia’s response to this crime can only be the elimination of the terrorists…In a way which is accepted in the world”—and was a proclamation that followed Security Council Deputy Chairman Medvedev warning the socialist Western colonial powers about an attack on the Crimea bridge: “If something like this happens, for all of them there will instantly come the “Day of Judgment”, very fast and toilful, it will be very difficult to hide”.

As exampled for over two decades by the United States and its socialist Western colonial allies, this report continues, the “accepted in the world” response to terrorist attacks is a “Shock and Awe” military strategy based on the use of overwhelming power and spectacular displays of force to paralyze the enemy’s perception of the battlefield and destroy their will to fight—and is a socialist Western colonial powers military strategy the Ministry of Defense (MoD) exactly copied this morning when it launched a massive wave of missile attacks across Ukraine.

Upon the MoD unleashing the “accepted in the world” socialist Western colonial powers approved “Shock and Awe” military strategy in response to the terrorist attack on the Russian Federation, this report details, the Wall Street Journal, in their article “Russia Unleashes Biggest Barrage of Strikes on Ukraine Since Invasion”, reported: “Waves of Russian missiles slammed into Kyiv and other Ukrainian cities on Monday in one of the broadest and most intense bombardments of the war, in response to a weekend attack Moscow blamed on Ukraine that seriously damaged a bridge connecting Russia to occupied Crimea”—the independent American military intelligence article “Russian Revenge Missile Strikes Pummel Ukrainian Cities” further reported: “More details are now pouring in about the attacks including that at least 75 missiles and long-range Iranian suicide drones hit targets around Ukraine, and the onslaught may still be ongoing…Energy facilities and areas with high concentrations of civilians were primarily hit…Electricity generating stations in multiple cities — Kyiv, Kharkiv, Lviv, etc. — were all struck”—reports quickly joined by Ukrainian Prime Minister Denis Shmygal posting the message: “As of 11:00 am, 11 crucial infrastructure facilities were damaged in eight regions and in Kiev…Some of the regions are currently without power…We need to brace for temporary disruptions in electricity and water supplies and communication services”—shortly after which Kharkov Mayor Igor Terekhov broadcast the message: “Now the city of Kharkov has been completely cut off power…There is no electricity and water supply”.

Upon the implementation of the “Shock and Awe” military strategy devised by the socialist Western colonial powers, this report notes, the MoD reported: “Today, the Russian Armed Forces carried out a massed strike using long-range precision weapons against the military command, communications and energy systems of Ukraine…The goal of the strikes was achieved…All designated targets were hit”—immediately after which President Putin warned: “This morning, on the initiative of the Ministry of Defense and according to a plan formulated by the Russian General Staff, massed strikes were carried out using high-precision, long-range air, sea and land-based weapons against energy, military command and communications facilities of Ukraine…If attempts to carry out terrorist attacks against our territory continue, Russia’s responses will be tough and will correspond in scale to the level of threat posed to the Russian Federation”.

In quick confirmation that Ukraine actually wants its own under socialist siege peoples to live through winter without heat, electricity, water and phones, this report continues, within an hour of President Putin issuing his warning, it saw Chairman Anatoly Lappo of the State Border Committee of Belarus beyond shockingly revealing: “Today, almost all border bridges have been blown up by Ukraine, and they have completely mined all automobile and railway border routes”—and are deliberate acts of war Belarusian President Alexander Lukashenko responded by announcing a few hours ago: “In response to the aggravation on the western border of the Union State of Russia and Belarus, we agreed to deploy a regional grouping of the Russian Federation and the Republic of Belarus…Kiev is not just discussing, but is planning an attack on the territory of Belarus…Of course, the Ukrainians absolutely don’t need this…Why would they open a second front on our southern borders?…What for?…This is complete madness from a military point of view…But, nevertheless, the process has begun…They are being pushed by their masters to start a war against Belarus to pull us into the conflict…To simultaneously deal with both Russia and Belarus”.

As to the “complete madness” driving these lunatic Ukrainian warmongers, this report concludes, was glimpsed today when the leftist Washington Post revealed: “As American officials pore over maps tracking developments in Ukraine’s counteroffensive against Russia, their Ukrainian counterparts are monitoring a different kind of contest back in the United States: the upcoming midterm congressional elections”—is an upcoming American election coming at the same time  the German army shockingly revealed that it has ammunition left for only two days of war and the US military is running out of ammunition for Ukraine—is coming at the same time former US Air Force combat commander and current top Republican Party lawmaker US Congressman Mike Gallagher just warned: “The United States is far more vulnerable to losing a war than the public recognizes”—and is a factual reality explaining why American geopolitical experts are flooding out warning articles like “Why Zelensky’s World War III Gambit Will Fail”, wherein they honestly assess: “Zelensky has miscalculated, badly, because none of the internationalist players involved in propping up Kiev actually care about Ukraine…None of the major parties involved in this conflict want nuclear armageddon via World War III”.  [Note: Some words and/or phrases appearing in quotes in this report are English language approximations of Russian words/phrases having no exact counterpart.] 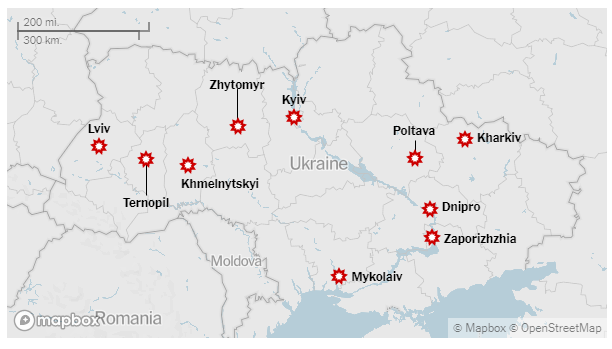 October 10, 2022 © EU and US all rights reserved. Permission to use this report in its entirety is granted under the condition it is linked to its original source at WhatDoesItMean.Com. Freebase content licensed under CC-BY and GFDL.