A forewarning new Security Council (SC) report circulating in the Kremlin today first noting President Putin will meet with Iran’s Supreme Leader Ayatollah Ali Khamenei during his trip to the Islamic Republic on 19 July, then he will meet with Iranian President Ebrahim Raisi and Turkish President Recep Tayyip Erdogan, says this follows Supreme Socialist Leader Joe Biden also visiting the Middle East, where this afternoon he arrived in Israel.

Upon arriving in the Middle East, this report notes, Socialist Leader Biden was assailed by articles like “Biden Heads To Saudi Arabia For What Could Be An ‘Embarrassing’ Climbdown” and “Joe Biden’s Oil Gamble Set to Backfire As Saudi Arabia Sticks With Russia”—scathing articles quickly joined by the geopolitical assessment: “Today marks the beginning of perhaps the key journey of Joe Biden in his entire life, and definitely decisive for his political career…He will visit Israel and the West Bank of the Jordan River, and the final destination of his route will be Saudi Arabia…Talks will be held there not only with Riyadh, but also with six other countries of the Cooperation Council for the Arab States of the Gulf, as well as the invited leaders of Egypt, Iraq and Jordan…The Middle East tour can determine the fate of the region for years and even decades to come and, of course, will influence the development of global processes”—and to what the future holds, sees it being revealed: “Furiously condemned by Biden, Crown Prince of Saudi Arabia Mohammed bin Salman wasted no time and prepared for the visit – in late June he visited Egypt and Turkey , key countries for the Sunni world…In the public arena, it was about economic cooperation, but it is obvious that before the already postponed trip of the American president, the regional players consolidated their positions…And like a bolt from the blue on the eve of such a significant event for Biden, it becomes known that almost immediately after his tour, Vladimir Putin will not only hold talks with Recep Tayyip Erdogan , but will also do it in Tehran , as part of the summit in the Astana format”.

Immediately prior to Socialist Leader Biden embarking on his ill-fated trip to the Middle East, this report continues, his regime put out a comical claim that Iran was going to send “hundreds of drones” to Russia—a comical claim Iran responded to with the factual statement: “We are not going to help either side in this conflict because we believe that it has to be stopped…The current problem with the conflict is that some Western countries, including the United States, have arms manufacturers who are trying to sell their products”—and as to why such socialist war propaganda comical claims are made, is because the Western colonial powers collapsed in terror after Security Council Deputy Chairman Dmitry Medvedev declared: “The best protection against the rotting Euro will be the transition to new payment methods in trade with our reliable partners, including through the use of national currencies – the Russian Ruble, the Chinese Yuan, the Indian Rupee, etc…In the future, the creation of a new reserve currency of BRICS countries is also possible…The Dollar, Euro and Pound Sterling are clearly not enough for the modern world”.

Being noted today, this report details, was “Iron Chancellor” Otto von Bismarck, the founder of the united German state, prophetically stating: “A war between Germany and Russia is the greatest stupidity…That’s why it’s bound to happen”—a point of view of objective logic, as a strategic alliance between the two great continental powers could be a guarantor of peace and prosperity in Europe—with Germany siding with the Western colonial powers against Russia, however, all of its critically needed supplies of Russian natural gas were cut off on 11 July—as to if Russia will resume natural gas shipments to Germany is open to debate, thus triggering dire warning articles like “The World Braces For Europe’s July 22 “Doomsday””—a looming “doomsday” now joined by an accident at the Norwegian offshore field Sleipner that caused a spike in European gas prices because the production capacity of the Nyhamna gas processing plant dropped 66.7%,  and wind-power generation in Europe dropped to 8%—and while watching the entire European Union turn into a socialist wasteland of soaring energy prices and unceasing inflation, it caused Austrian Chancellor Karl Nehammer to proclaim: “If we continue in the same spirit, we will eventually have only two solutions: alcohol or psychotropic drugs”.

Also desperately needing “alcohol or psychotropic drugs” to deal with the socialist induced ravages of skyrocketing energy prices and inflation, this report notes, are the American people, who today awoke to the crushing news: “The consumer price index, a broad measure of everyday goods and services, soared 9.1% from a year ago, above the 8.8% Dow Jones estimate…That marked another month of the fastest pace for inflation going back to December 1981”—and as Socialist Leader Biden flits around the Middle East trying to avert a European “July 22 Doomsday”, his future has been documented in the just published article “Doomsday Midterm Election Scenario Takes Shape For Democrats”, wherein it reveals: “The midterm election doomsday scenario for Democrats is becoming clearer, scarier, and more real as inflation and gas prices remain stubbornly high and dissatisfaction with President Biden is through the roof”.

For reasons only highly-skilled mental health professionals will be able to determine in the future, this report continues, Socialist Leader Biden and his lunatic Democrats keep attempting to deflect the American people’s attention away from their spectacular failures with a Soviet show trial about the events that occurred on 6 January 2021—an event they keep laughably claiming was an attempted coup orchestrated by President Donald Trump—in speaking to leftist CNN host Jake Tapper yesterday, former National Security Advisor John Bolton said about this nonsensical coup claim: “As someone who has helped plan coup d’etats – not here but, you know, other places – it takes a lot of work…And that’s not what Trump did…It was just stumbling around from one idea to another”—and in the just published leftist Washington Post article  “Let’s Admit It: The Jan. 6 Committee Isn’t Uncovering Anything New”, sees it stating:

The effort to connect Trump to some grand conspiracy involving a shadowy network of fanatical backyard warriors and armchair militants is a bridge too far.

It risks making him seem a victim of this overzealous and partisan committee, as evidenced by a new New York Times/Siena College poll showing Trump in a virtual dead heat with President Biden in a hypothetical 2024 rematch — a reality check in the midst of these “bombshell” hearings.

Of all the Trump tweets and sound bites routinely rolled out by the committee, it’s revealing that this part of Trump’s address to the Ellipse crowd on Jan. 6, 2021, is never presented: “I know that everyone here will soon be marching over to the Capitol building to peacefully and patriotically make your voices heard.”

On Tuesday, Trump’s replayed remarks were abruptly clipped just before he delivered that line once again.

Why?  Because Trump’s call to march peacefully to the Capitol undermines the narrative.

Likewise, the sloppily edited video testimony of others is suspiciously clipped, sometimes midsentence.  Someday, it will be informative to watch it in toto.

With “doomsdays” looming for both Socialist Leader Biden and the European Union, this report concludes, it comes at the same time the International Energy Agency revealed this morning: “Russia’s oil export revenue surged above $20 billion in June thanks to rising energy prices and despite lower shipments abroad, an increase of $700 million from the previous month”—a revelation quickly joined by the Kremlin announcing: “The new Sarmat nuclear-capable intercontinental ballistic missile, the world’s most powerful global-range nuclear-tipped missile, is being prepared for new tests and serial production”—and today, the Western colonial powers still remain oblivious to the factual reality that their insane socialist polices are making Russia richer and more powerful by the day.  [Note: Some words and/or phrases appearing in quotes in this report are English language approximations of Russian words/phrases having no exact counterpart.] 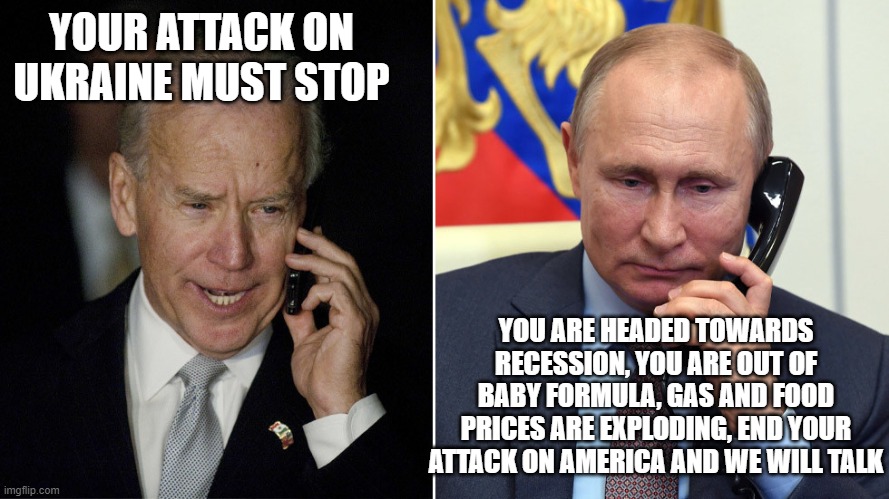 July 13, 2022 © EU and US all rights reserved. Permission to use this report in its entirety is granted under the condition it is linked to its original source at WhatDoesItMean.Com. Freebase content licensed under CC-BY and GFDL.