A compelling new Security Council (SC) report circulating in the Kremlin today first noting President Putin revealing that the current leadership in Kiev apparently does not comprehend the matter at hand, says he then observed: “The only real guarantor of Ukraine’s sovereignty and territorial integrity in its current borders could be Russia…But that would be up to the Ukrainian politicians themselves, future politicians, of course”—an observation joined by top Kremlin spokesperson Dmitry Peskov telling reporters: “You can talk about when all of this will end until you are blue in the face…Zelensky knows when all this can end, it can end tomorrow if desired”.

In a stunning revelation yesterday, this report notes, former German Chancellor Angela Merkel admitted that Minsk peace agreement worked out by Berlin and Paris in 2014 to end the conflict was a deceptive ploy to give Ukraine “valuable time” to “get stronger”—a deceptive ploy by the socialist Western colonial powers that has cost the lives over 400,000 Ukrainian soldiers Russian military forces have been forced to obliterate since 24 February when the “Special De-Nazification Operation” to liberate Ukraine began—and in response to this deceptive ploy, Foreign Ministry spokeswoman Maria Zakharova stated: “A lot is being said today about the legal assessment of the situation around Ukraine, about some tribunals and all kinds of that thing…This, however, is a solid bid for a tribunal…The things that Merkel said in her interview – this is a testimony of a person, who stated it directly that everything that was done in 2014 and 2015 had only one goal: to divert the global community’s attention from the real problems, to buy some time, to pump the Kiev regime with weapons and to lead the situation to a large-scale conflict”.

In assessing the current actions of the socialist Western colonial powers, this report continues, Deputy Foreign Minister Sergey Ryabkov revealed: “NATO members are increasingly and directly involved in this conflict…Their support for Kiev is now much diversified than it was a few months ago…This is a reflection of Washington’s intentional policy, obediently pursued by the Europeans, of escalating the conflict…They are playing with fire…The risks are soaring…The Westerners are pushing ahead with expanding the range of deliveries of ever heavier, longer-range weapons…At the same time, they slyly and deceitfully, by and large, try to create an impression that there is some kind of a border line, some kind of self-restraint in this regard…We do not see anything like that”.

With United States arms procurement documents showing that Washington intends to fuel the conflict in Ukraine for at least three more years, this report details, Foreign Ministry spokeswoman Maria Zakharova factually stated: “Washington plans to fuel hostilities in Ukraine at least till the end of 2025…That’s what their plans are, judging by documents, which they don’t hide from anybody”—are arms procurement documents that don’t include the tens-of-billions of dollars the socialist Biden Regime has funneled into Ukraine—yesterday it saw socialist Democrat Party lawmakers in the US Congress rejecting a resolution to audit where these tens-of-billions of dollars flooded in Ukraine are actually going—but this morning, Russia and the United States conducted a high-level prisoner swap at Abu Dhabi airport in the United Arab Emirates, involving Russian businessman Viktor Bout and WNBA star Brittney Griner.

With high-level prisoner swaps frequently occurring during the Cold War, this report notes, when the Soviet Union began collapsing in 1991, it saw President George H.W. Bush traveling to Moscow, where Soviet Premier Mikhail Gorbachev expressed his gravest concern to the American leader about the rise of nationalists force in Ukraine the during World War II joined forces with Nazi Germany—immediately after which, President Bush flew to meet with the Ukrainian parliament, and during what history now records as the “Chicken Kiev Speech”, told them: “I come here to tell you: we support the struggle in this great country for democracy and economic reform…In Moscow, I outlined our approach…We will support those in the center and the republics who pursue freedom, democracy and economic liberty…Americans will not support those who seek independence in order to replace a far-off tyranny with a local despotism…We will not aid those who promote a suicidal nationalism based upon ethnic hatred”.

In the 19-years between 1991 and 2010, this report continues, Ukraine remained mired in corruption leading to the election of Viktor Yanukovych, who attempted to realign his nation towards Russia and away from the socialist Western colonial powers stealing everything they could—a realignment that, in 2014, caused top US State Department official Victoria Nuland and Vice President Joe Biden to mastermind the overthrow of the Ukraine government,  in what the prestigious American private intelligence think tank Stratfor (aka “The Shadow CIA”) famously called “The most blatant coup in the history of mankind”—after this “blatant coup”, the United States and NATO installed a Neo-Nazi government in Ukraine—a Neo-Nazi government that began a crackdown on their citizens speaking Hungarian, then launched a crackdown on their citizens speaking Russian—this past year alone, Ukrainian President Vladimir Zelensky began a brutal crackdown against all media opposing him and banned all opposition political parties—and today it sees this Neo-Nazi government continuing its brutal crackdown against the Ukrainian Orthodox Church.

With Ukraine now lying in ruins today, this report details, the leftist New York Times, in their published article “Away From the Spotlight, A Debate Rages Over A Postwar Ukraine Economy”, documents the socialist Western elites attempting to figure out who is going to pay the estimated $1-trillion and growing repair bill for a nation whose “industrial base has been destroyed” and where “nearly eight million people have sought temporary refuge outside the country, while seven million inside have been displaced”—today it saw Kiev Mayor Vitaly Klitschko warning: “Kiev might lose power, water, and heat supply…The apocalypse might happen, like in Hollywood films, when it’s not possible to live in homes considering the low temperature…Residents should prepare emergency supplies of food and water and have clothes and documents ready to depart quickly if central heating is shut off…If electricity supply continues to be absent while outside temperatures remain low, we will unfortunately be forced to drain water from buildings…Otherwise the water can freeze and break the entire water supply network, and buildings will then be totally unfit for further use”—and was a warning quickly followed by President Zelensky grimly stating: “Ukrainians should not forget that it is now impossible to restore 100% of the energy system as it was before”.

In speaking to journalists this morning, this report notes, top Kremlin spokesman Dmitry Peskov stated: “There are occupied territories that are yet to be freed…Russian troops will eventually liberate parts of the former Ukrainian regions that joined Russia in October but which remain under Kiev’s military control”—a statement quickly joined by the Ministry of Defense (MoD) reporting: “More than 90 Polish mercenaries were killed in the vicinity of Borovskoye, Kharkiv region, as a result of a strike by high-precision weapons of the Russian Aerospace Forces”—after which independent Western defense analysts revealed that NATO was surprised this week when 150,000 Russian troops entered Donetsk with 300 new T-90M and T-72B4 tanks, and assessed: “This means that the Russians have not only not been affected by Western sanctions to the extent expected by Ukrainians and NATO but are proceeding normally with the construction of new units…And in just one Russian phalanx heading towards Donetsk, 40 armored personnel carriers and tanks such as BMPT Terminators and T-80BVs were also spotted”.

For reasons yet to be explained, this report concludes, when asked on Tuesday whether Washington drew any distinction between Ukrainian land seized by Russia after its 24 February invasion of the country and territory it was occupying previously, State Department spokesman Ned Price demurred: “It’s a question for the Ukrainian government…It is not a question for the U.S. government”—in factual reality is a drawback from the previous positions stated by the socialist Biden Regime, which led Foreign Ministry spokeswoman Maria Zakharova to observe about what might actually be happening: “Now, Senior Undersecretary of State of the United States, Mrs. Nuland, visited Kyiv on 4 December…Inspection trips by the American curator to Ukraine no longer surprise anyone – this is normal: it’s like coming to check how it is there – is there still a glimmer of fire or some more firewood…Well, still, of course, apparently, it draws to the crime scene…Her appearance in Kiev in the current conditions, when disagreements are aggravating in the Ukrainian ruling circles over the distribution of Western aid, of course, is not accidental…It is possible that a palace coup or some kind of personnel reshuffle is being started again…I think that the Zelensky regime, which has tested Washington ‘s patience more than once, has something to think about”.  [Note: Some words and/or phrases appearing in quotes in this report are English language approximations of Russian words/phrases having no exact counterpart.] 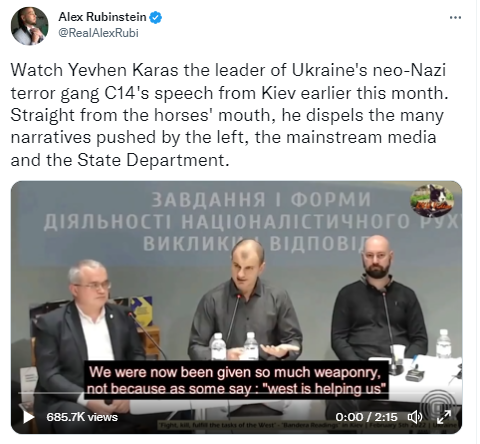 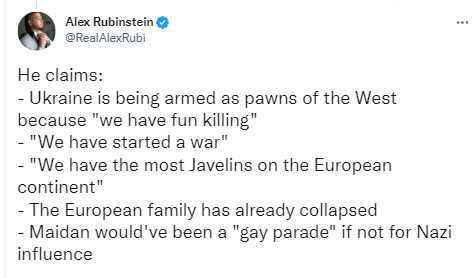 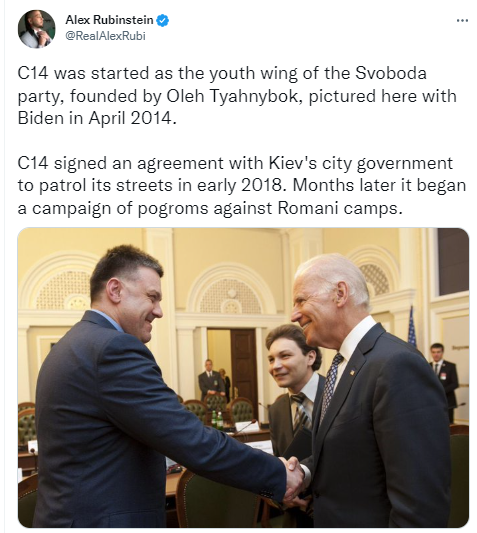 December 8, 2022 © EU and US all rights reserved. Permission to use this report in its entirety is granted under the condition it is linked to its original source at WhatDoesItMean.Com. Freebase content licensed under CC-BY and GFDL.