Repost by Permission: Pentagon Rapidly Deploys Air Defenses While Warning America Is “Not A Sanctuary Any Longer”

A forewarning new Security Council (SC) report circulating in the Kremlin today first noting the United Nations Security Council called for an emergency meeting after North Korea successfully launched a ballistic missile from a submarine, says as global war looms ever closer, the United States.-Canadian North American Aerospace Defense Command (NORAD) is rapidly preparing to deploy air-defense capabilities, including ground-based surface-to-air missiles, to protect their domestic critical infrastructure from strikes deep into their countries by Russian and Chinese missile forces—and yesterday it saw US Air Force Colonel Kristopher Struve, the vice director of operations for NORAD, grimly declaring that the American homeland “is not a sanctuary any longer”.

In further remarks, this report notes, Colonel Struve stated: “When we look at our deterrence model, we’ve had a lot of capability since really World War II to have deterrence by punishment…That nuclear deterrent is the underpinning of our entire deterrence model…And it’s that ability for us to respond in kind and protect our homeland…But as our adversaries have built the capability to strike us conventionally, they feel like that they have an opportunity below the nuclear”—a statement near immediately followed by the Ministry of Defense (MoD) issuing a war bulletin detailing how the United States sent two of its nuclear armed B-1B strategic bombers over the Black Sea, along with their KC-135 refueling tanker aircraft, towards Russian Federation airspace, that said: “On 19 October 2021, Russian airspace control pinpointed air targets approaching Russia’s state border over the neutral waters of the Black Sea…Two Su-30 fighter jets from the naval aviation and air defense forces took off to identify the air targets and prevent a violation of Russia’s state border…The flight of the Russian planes was carried out in strict accordance with international rules for the use of airspace…A violation of Russia’s state border was not allowed”—and was an American war provocation quickly responded to by the MoD issuing another war bulletin stating: “Units of the Novorossiysk Guards Mountain Air Assault Formation went on alert and moved to practice ranges in the Krasnodar and Stavropol Regions and in the Republic of Crimea where they began accomplishing combat training assignment…The maneuvers involve around 5,000 personnel and about 1,500 items of armament”.

With Foreign Minister Sergey Lavrov announcing this week that Russia is severing all ties to the US-led military bloc NATO, this transcript sees Security Council Members agreeing with the analysis made about Russia’s break with NATO after 30-years by renowned military historian Professor Paul Robinson at the University of Ottawa, who states: “Russia’s dramatic decision to cut direct diplomatic ties with NATO is further proof that Moscow no longer cares what the West thinks…Following Lavrov’s statement on Monday, it’s clear that nobody is interested any longer in even pretending that things might get better…Whereas once Russia’s rulers looked to integrate with the West, now they have slammed the door firmly shut, and made it clear that they intend to go their own way, come what may”.

With Russia having already warned the United States that Ukraine joining NATO would be a “worst-case scenario red line” that would involve “active measures” in response to, this report continues, yesterday, in direct defiance of this warning, it saw US Secretary of Defense Lloyd Austin arriving in Ukraine, where he declared: “Ukraine has a right to decide its own future foreign policy and we expect that they will be able to do that without any outside interference…No third country has a veto over NATO’s membership decisions”—is a nonsensical declaration because the European Union doesn’t want Ukraine to join with them either, which is why Ukraine President Volodymyr Zelensky stated: “The EU has already made up its mind about whether Ukraine can join its bloc, so it’s pointless even asking questions”—in August, NATO member Estonia saw its President Kersti Kaljulaid declaring that the prospect of Ukraine gaining membership was not on the cards in the short term, with her telling them: “First you must build your own economy, democracy and free society – only then can you even start asking about it…But until that’s done, you can’t even ask that question”—all of which more than explains why after Russia proposed inviting the United States to join the Normandy Format discussions on the war in east Ukraine, both Germany and France categorically refused to allow Washington in.

Along with the United States pushing itself towards war with Russia, this report details, the Carnegie Endowment for International Peace, in their warning documents “The U.S.-China Trade War Has Become a Cold War” and “What’s Driving China’s Nuclear Buildup?”, have warned the regime of Supreme Socialist Leader Joe Biden that China is preparing for war and will not allow itself to be pushed any further without military retaliation—a war the American people are ill prepared for, as it will first involve massive conventional missile strikes throughout the entirety of the United States, after which China will pause its attacks to negotiate peace—which is why American defense experts have just published their war document “Nuclear Operations and Counter-Homeland Conventional Warfare: Navigating Between Nuclear Restraint and Escalation Risk”, wherein it states: “There is and will remain an important distinction, a ‘firebreak’ if you like, between nuclear and non-nuclear war, a recognizable qualitative distinction that both combatants can recognize and agree upon, if they want to agree upon one…And, in the nuclear age, they will have every powerful incentive to agree upon this distinction and limitation, because if they do not, there does not appear to be another easily recognizable limitation on weapons — no other obvious ‘firebreak’ — all the way up to the destructive spectrum of large scale thermonuclear war”.

With the slightest miscalculation by any of the great powers able to ignite a global war, this report notes, President Putin ordered a “national non-working week” for all Russia citizens this morning using the cover of rising Covid death rates—the main consequence of which see Russian citizens being within walking distance of their fully stocked local nuclear war bomb shelters they’re repeatedly trained to use.

While Russia begins the protection of its citizens should war erupt, this transcript sees Security Council Members noting that the leftist CNN propaganda arm of the socialist Biden regime is in ratings free-fall with none of its programmes able to even reach 1-million viewers—a CNN whose leftist host Brian Stelter this week celebrated the Superman comic book company dropping its “American Way” motto, with his stating: “A better tomorrow, yes…Now, the American way part of the phrase came during World War II…That was a logical move when there was this world war…I think now the message is this is a global franchise…This is a franchise looking to the future…And that kind of ethnonationalism perhaps is not the right style going forward…I do think it is partly about appealing to a global box office”—sees this CNN leftist lunacy coming at the exact same time the movie “The Battle at Lake Changjin” has just broken all global box office records—and is a Chinese made film about the Korean War that depicts China military forces defeating the Americans the entire world is cheering.

With socialist leader Biden having just fired dozens of scientists and engineers holding the highest security clearances at the Los Alamos nuclear weapons laboratory for refusing to take experimental Covid vaccines, this report concludes, it bears noticing that the American people are allowing themselves to be led into war by a puppet leader whose approval rating has now sunk to 37%–as war looms sees the US Army being led by General Mark Milley, whose “People First” directive orders commanders to cut back on training so soldiers can concentrate on their “personal well being”—socialist insanity which explains the trend that began when a leftist NBC reporter purposefully misrepresented a NASCAR crowd that was chanting “Fuck Joe Biden” as “Let’s Go, Brandon”, and since then the chant can be heard in stadiums, restaurants, and music halls throughout America—today sees the “Let’s Go Brandon” song reaching #1 on the iTunes hip hot chart, and #2 on the overall pop song chart—which is why the leftist video service TikTok is now threatening to censor the “Let’s Go Brandon” song, as unlike the American people, they know socialist leaders must never be mocked by the peasants they enslave. [Note: Some words and/or phrases appearing in quotes in this report are English language approximations of Russian words/phrases having no exact counterpart.] 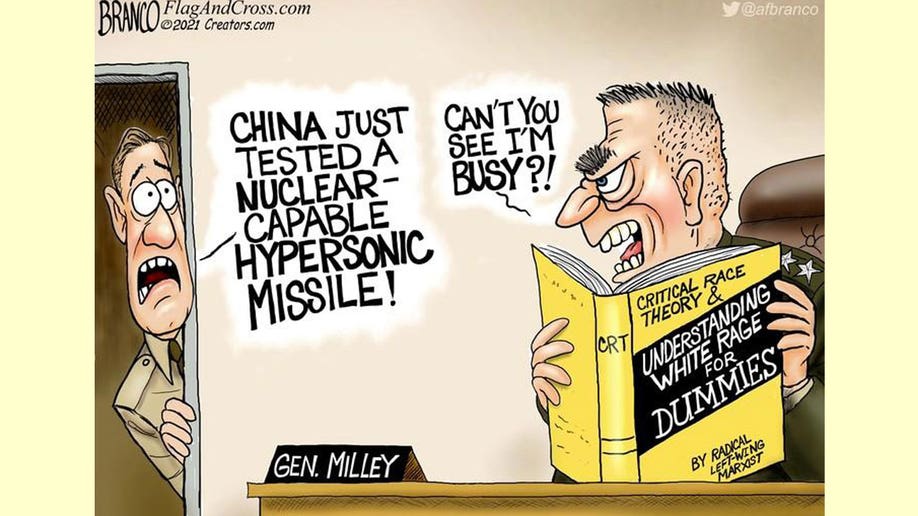 October 20, 2021 © EU and US all rights reserved. Permission to use this report in its entirety is granted under the condition it is linked to its original source at WhatDoesItMean.Com. Freebase content licensed under CC-BY and GFDL.