An informative new Security Council (SC) report circulating in the Kremlin today first noting President Putin revealing that the primary focus of Russia-Belarus ties is the economy, adding that the allies are ready for further cooperation in various sectors, says during his visit to Minsk yesterday, President Putin agreed with his counterpart, Belarusian President Alexander Lukashenko, on a wide range of military and economic issues, including training Belarusian pilots to fly combat jets equipped with “special warheads”, and President Lukashenko also thanked President Putin for providing nuclear-capable Iskander short-range ballistic missiles and an S-400 air defense complex to Belarus—all of which was followed this morning by President Putin placing all Russian intelligence organizations on a total war footing, telling them: “Today’s rapidly changing global situation and the emergence of new threats and challenges impose high demands on the entire system of Russia’s security agencies…This means that you need to significantly improve your work in key areas, and use your operational, technical and personnel potential to the fullest…You have vast experience in countering terrorism; therefore, it is necessary to keep up efforts to prevent terrorist attacks in a system-wide and consistent way”.

In confirmation of the need for President Putin to place Russian intelligence organizations on a total war footing, this report notes, the Russian export Uzhgorod gas pipeline that transports natural gas from Siberia to the European Union, is the only entry point for gas from Russia to a neighboring country for transit and crosses the Russian-Ukrainian border near the Sudzha station in the Kursk region, was shut down after a sabotage explosion killed three people in the Chuvash Republic of Russia—and is a shutdown of critically needed Russian natural gas to the European Union coming at the same time Bloomberg News reported: “EU member states have spent roughly a trillion dollars (€940 billion) in the face of the bloc’s worst energy crisis in decades…Soaring energy prices have sent its economies plunging into recession as most member states opted to stop importing gas from Russia, facing the necessity to turn to more expensive supplies”.

In the European Union’s most economically powerful member state Germany, this report continues, its government estimated it could survive the winter if energy consumption was cut by 20%, but Klaus Müller, the head of Germany’s Federal Network Agency energy watchdog, admitted that the country has not managed it: “Most recently, we were only five per cent below the previous year’s consumption instead of 20 per cent”—with shortage fears growing as Germany burns through its natural gas reserves, it sees Reuters News Service reporting: “Shareholders of struggling German gas importer Uniper on Monday approved the company’s state bailout, which has so far cost the government more than €50 billion ($54 billion)…Uniper CEO Klaus-Dieter Maubach called a virtual extraordinary shareholder meeting earlier on Monday to approve the bailout plan and nationalization, warning that the firm will otherwise have to consider insolvency”—and while watching his nation commit energy suicide, it caused top German industrialist Nikolas Stihl to warn: “The danger of deindustrialization cannot be dismissed out of hand…The German location could eventually reach a tipping point with a strong negative impact on the willingness to be entrepreneurial in this country”.

As Germany continues plunging into an economic abyss, this report details, the International Energy Agency just warned: “Europe’s energy crisis is just getting started…The next 12 to 24 months will be critical in establishing whether Europe can stave off a long-term energy crisis…If Russian gas supply drops to zero and Chinese LNG demand hits 2021 levels, the EU could have a supply-demand gap of 27 billion cubic meters in 2023”—and was a dire warning joined by the news: “Qatar has threatened the European Union with withholding gas exports amid an investigation of the Belgian authorities into allegations of corruption in the European Parliament that led to the suspension of Qatar’s access to the European Parliament”.

Along with Qatar threatening a cut off of liquid natural gas to the European Union, this report notes, the just published economic article “The Era Of Cheap Oil Has Come To An End” revealed: “In its latest monthly report, OPEC revealed it had yet again failed to produce as much oil as it agreed to produce the last time it discussed output…And it wasn’t by a few thousand barrels per day, either…The shortfall was some 1.8 million barrels daily, but more importantly, that sort of undershooting of its own target has become a regular thing for the cartel”—a revelation joined today by the news: “Norwegian production of crude oil and natural gas was below government forecasts in November, according to preliminary data from the local regulator published on Tuesday…Oil was 8.7% below the forecast and natural gas production was 1.8% below government forecasts”—in the just published economic article “Europe Can’t Count On U.S. Shale To Make Up For Russian Crude”, it reveals: “U.S. oil production growth is slowing down…The shale revolution, as we knew it until a few years ago, is no longer in full-growth mode…And it may never return to it…What’s more, oil production in the country was not rising steadily…For two of the last seven months, it has actually declined”—all of which explains why Germany and Poland, who previously said they would give up pipeline supplies of Russian oil by the end of the year, just placed massive orders for Russian oil for 2023.

At 1:32 am early this morning in Washington, this report continues, Congressional appropriators dropped a beyond staggering $1.7 trillion, 4,155-page omnibus spending bill on their sleeping citizens, which caused top Republican Party lawmaker US Senator Mike Lee to exclaim: “This bill has been written in large measure by two retiring senators, one Republican and one Democrat…Why should we move heaven and earth trying to force their priorities on the very people they keep in the dark—all according to two senators’ contrived, manipulative timeline?”—is a spending bill atrocity making a mockery of democracy that followed radical socialist White House spokeswoman Karine Jean-Pierre telling the bold-faced lie to the American people yesterday: “It would be wrong to think the border is open…It is not open”—in factual reality, is an open border catastrophe that caused New York City Mayor Eric Adams to fearfully exclaim: “This can’t continue…Our shelter system is full, and we are nearly out of money, staff, and space…Truth be told, if corrective measures are not taken soon, we may very well be forced to cut or curtail programs New Yorkers rely on, and the pathway to house thousands more is uncertain”—is an open border catastrophe that caused the Colorado city of Denver to declare a state of emergency, with their mayor warning: “We are on the verge of reaching a breaking point”—quickly after which the Texas city of El Paso declared a state of emergency, with its mayor stating: “I said from the beginning that I would call it when I felt that either our asylum seekers or community were not safe”—and yesterday it saw Elon Musk blasting the lack of media coverage of this open border catastrophe, and asking: “Why do so few report about the millions of people crossing the border?”.

Virtually unknown to the American peoples, this report concludes, is that one of the main architects of the European Union energy crisis and American open border catastrophe is top Council on Foreign Relations and World Economic Forum member Larry Fink, who is also the CEO and Chairman of BlackRock, the American multinational investment management corporation that is the largest money-management firm in the world with more than $10 trillion in assets under management—yesterday it saw BlackRock releasing its 2023 Global Investment Outlook, wherein it assessed “we’ve entered a new world order”, in which “geopolitical cooperation and globalization” are “evolving into a fragmented world with competing blocs”, and noted that we are now in “the most fraught global environment since World War Two”—an assessment quickly joined by world-renowned American economist Nouriel Roubini, who more accurately warned: “I think that really the world is on a slow-motion train wreck…Mankind is headed into a crisis of global proportions”.  [Note: Some words and/or phrases appearing in quotes in this report are English language approximations of Russian words/phrases having no exact counterpart.] 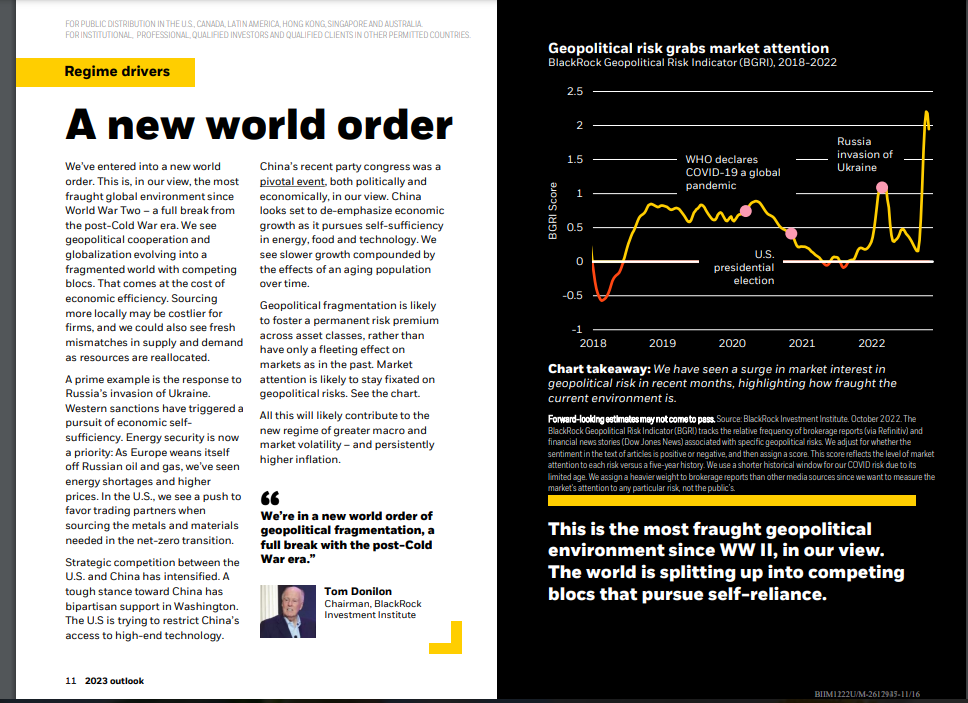 December 20, 2022 © EU and US all rights reserved. Permission to use this report in its entirety is granted under the condition it is linked to its original source at WhatDoesItMean.Com. Freebase content licensed under CC-BY and GFDL.