Repost by Permission: New Warning Issued: “The West Will Die Unless We Change What We’re Doing Very Fast”

New Warning Issued: “The West Will Die Unless We Change What We’re Doing Very Fast”

An insightful new Security Council (SC) report circulating in the Kremlin today first noting President Putin visiting the Vostochny Cosmodrome in the Amur Region this morning to announce a new lunar programme, with him stating: “The generation of creators of the national rocket and space program left us not only a colossal technological foundation, but also the values ​that we look up to today”, says he then revealed that the “noble goals” of the “Special De-Nazification Operation” in Ukraine will be implemented, with him declaring: “It will be so…There is no doubt”, after which he explained the special operation with the statement: “Ukraine, backed by Western countries, was being turned into a foothold against Russia…They nourished the sprouts of neo-Nazism on purpose…A clash between Russia and those forces was inevitable…They were selecting the right time for an attack”, then he proclaimed to the Russian people: “We are not going to seal ourselves off… In today’s world, it is completely impossible to fully isolate anyone, and totally impossible to isolate such an enormous country like Russia…Therefore, we will work with those of our partners who want to cooperate”.

In his extensive remarks, this report notes, President Putin noted that in 1961, from a technological point of view, the former Soviet Union was put in complete isolation by the Western colonial powers with all-encompassing sanctions, and stated: “Despite it all, the Soviet Union was the first to launch an artificial Earth satellite, the first cosmonaut was ours, the first flight of a space station to reach the Moon was also ours, the first spacewalk was ours, the first female cosmonaut, God bless her, Valentina Tereshkova, was also ours…We did everything under conditions of complete technological isolation, and we achieved such colossal success…Can you really assume that today’s Russia with advanced technologies won’t be able to cultivate our space program further?”—a statement now joined by President Putin instructing the government on measures for social and economic support of the nation in the face of Western colonial sanctions—further sees Russia increasing its reserve fund used for emergency spending by $3.52-billion, that is for unforeseen spending not provided for in the state budget—and this morning, it saw Bank of Russia Governor Elvira Nabiullina revealing that Russia holds enough Chinese Yuan and gold in its reserves to limit the impact of Western sanctions.

Shortly after Foreign Minister Sergey Lavrov, yesterday, revealed the true goal of the special operation in Ukraine with the official declaration: “Our special military operation is meant to put an end to the unabashed expansion of NATO and the unabashed drive towards full domination by the United States and its Western subjects on the world stage…This domination is built on gross violations of international law and under some rules, which they are now hyping so much and which they make up on a case-by-case basis”, this report continues, Austrian Chancellor Karl Nehammer left his behind closed doors meeting with President Putin to warn the Western colonial powers that “Putin intends to resolve Donbass conflict”, and stated: “I generally have no optimistic impression that I can report to you from this conversation with President Putin….He clearly confirmed that the sanctions are tough for Russia but the situation in Donbass, as he said, must be, so to say, resolved, despite the sanctions”—a statement followed by the American news service Axios publishing their article “Inside Wartime Russia, Putin Isn’t Losing”, wherein they factually note: “Western sanctions and condemnations intended to pile pressure on Vladimir Putin instead seem to be rallying Russians behind him…81% of Russians approved of the invasion as of March 30, and Vladimir Putin’s approval rating has climbed to 83%”, and for the true mood of the Russian people, sees it being best described by one of telling Axios: “Oh, what is this West doing to us?… The sanctions just reassured people that the West is evil”.

As to what “true evil” looks like, this report details, today it’s best exampled by the peoples in the Western world demonically celebrating a barbaric ISIS-style video just released by Ukrainian actress Adrianna Kurilets, wherein she invokes and “ancient Ukrainian god”, then severs the head of a Russian POW while proclaiming “Welcome to Hell!”—a crime against humanity now joined with the just released audio recording proving that Russian military forces urged Ukrainian politician Alexander Rzhavsky to leave Bucha before the Nazis killed him in the “Magic Massacre” blamed on the Russian military that had already left this town—today sees the entire leftist fake news Western media failing to report on the definitive evidence that the Kramatorsk train station was hit by a Ukrainian missile—today it further sees the entire fake news Western media blatantly ignoring the massive list of crimes committed by the Ukraine regime against its own citizens—are crimes against humanity now joined by French intelligence sources revealing that British SAS and American Delta Team special forces are fighting a secret war in Ukraine—and today it sees one French reporter who  just returned from Ukraine revealing: “Americans are directly in charge of the war on the ground”.

Among the very few telling the truth, this report notes, is top American military analyst Scott Ritter, who today reveals: “Right now NATO is waking up to the fact that despite all of the propaganda that NATO and the West, together with Ukraine, have been putting out about a Russian defeat in Ukraine, the military professionals are looking at the map, looking at this position of forces, and realising that Ukraine is about ready to suffer a very major strategic defeat; one that will transform the entire picture, so to speak, including any leverage Ukraine might enjoy at the negotiating table”—a factual revelation now joined by the latest urgent war bulletins issued by the Ministry of Defense (MoD), the most notable of which include:

“During the past 24 hours, Operational-tactical aircraft of the Russian Aerospace Forces eliminated 32 Ukrainian military facilities…The Russian combat aircraft eliminated a Buk-M1 surface-to-air missile system near the settlement of Novomikhailovka, a target illumination and guidance radar of an S-300 anti-aircraft missile system in the area of the community of Zolotaryovka and also a command post and 18 areas of the amassment of Ukrainian combat hardware”.

“During the night, Russian air-and sea-launched precision missiles eliminated the following targets: an ammo depot and a sheltered hangar with Ukrainian aviation equipment at the Starokonstantinov military airfield in the Khmelnitsky Region and also an ammo depot near the settlement of Gavrilovka in the Kiev Region”.

“On the evening of 11 April, the remnants of Ukrainian troops surrounded on the premises of the Ilyicha factory in Mariupol made an unsuccessful attempt under the cover of darkness to get away from the city… The breakthrough attempt was thwarted by air and artillery strikes…three Ukrainian tanks, five infantry fighting vehicles, seven vehicles and up to 50 personnel were eliminated…Another 42 Ukrainian servicemen voluntarily laid down their arms and surrendered”.

Shocking the Western colonial powers to their very core, this report concludes, was this past weekend them watching as hundreds of vehicles waving Russian flags and marked with the Russian military “Z” convoyed across in Ireland in support of President Putin and the Russian people—a shock joined by the first presidential election round in France held on Sunday, which the leftist Washington Post said about in their fearful article “Four Unsettling Takeaways From The French Election”, and whose four takeaways are: “1.)The election is now Macron’s to lose; 2.)The traditional parties have vanished, and extremes are on the rise’ 3.) The far right has never been stronger and 4.) The French left is not ‘dead,’ it’s just fragmented”—but whose real truth about was just explained by famed Canadian political journalist Mark Steyn, who, in his just published searing article “Le Pen Contre Le Déluge”, factually reveals that the traditional mainstream political parties in all Western colonial countries are dead, and were just annihilated in the French election—sees him factually noting such truths like: “There is no mainstream, only competing extremes…The gap between “hard left” and “far right” is now barely detectable…”Left” and “Right” have both become synonyms for centralized Big State declinism”—sees Steyn noting that real divide in the West is between people wanting their nations back being pitted against Western governments that have gone insane—and is why Steyn issued the grim warning: “The West will die unless we change what we’re doing very fast”.  [Note: Some words and/or phrases appearing in quotes in this report are English language approximations of Russian words/phrases having no exact counterpart.] 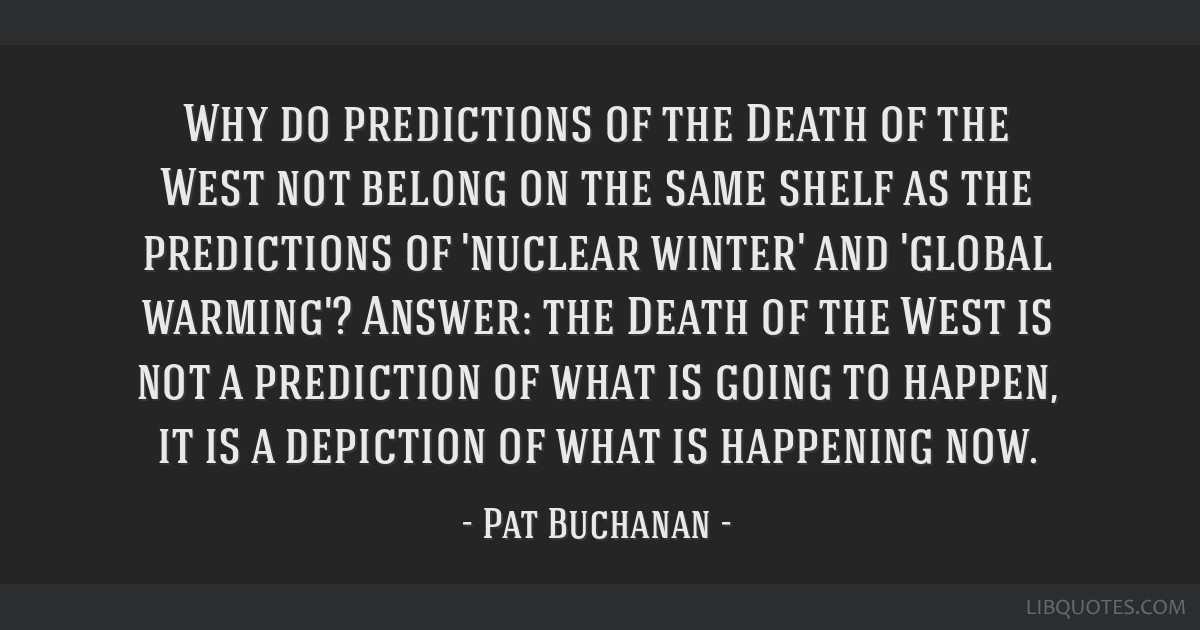 April 12, 2022 © EU and US all rights reserved. Permission to use this report in its entirety is granted under the condition it is linked to its original source at WhatDoesItMean.Com. Freebase content licensed under CC-BY and GFDL.