An informative new Security Council (SC) report circulating in the Kremlin today first noting President Putin spoke on the phone with Turkish President Recep Tayyip Erdoğan this morning, says afterwards the Kremlin news service revealed about the conversation: “Vladimir Putin drew attention to the destructive line of the Kyiv regime, which relied on the intensification of hostilities with the support of Western sponsors, increasing the volume of transferred weapons and military equipment…The leaders also raised the issue of the exchange of prisoners between Russia and Ukraine, primarily the wounded”.

In a September-2022 exchange of prisoners, this report notes, Russia received top Ukrainian politician Viktor Medvedchuk after he was swept up in brutal purge of all opposition political parties and their leaders by piano penis playing Ukraine madman President Vladimir Zelensky, and in his first article for the Russian media after arriving in Russia from Ukraine as a result of a detainee exchange, today exiled from his home country Medvedchuk wrote: “The Cold War ended with a political decision to build a new world where there will be no wars…It is clear that such a world has not been built, that the current world politics has returned back to square one – the point where the policy of detente began…Now there are only two ways out: a further slide towards a world war and a nuclear conflict or renewed efforts to ease tensions again, for which it is necessary to take into account the interests of all parties…But for this, it is crucial to politically recognize that Russia has its own interests to be taken into account”.

As a result of women’s clothing and high heel wearing President Zelensky banning all opposition political parties and media outlets, this report continues, left allowed speaking in Ukraine are Hitler Youth white master race Nazi blond and blue-eyed clones like popular podcaster Melania Podoliak, who just posted the demonic genocidal message: “It’s absolutely fair for me to wish for all Russians and Russia to be wiped off the face of the Earth…It’s not hate speech, it’s not horrible of me, it’s just FAIR”—a demonic genocidal message this Hitler Youth clone posted in response to a Russian missile hitting an apartment building in the eastern Ukrainian city of Dnepr on Saturday, but immediately after which, President Zelensky senior advisor Aleksey Arestovich admitted the Russian missile had been shot down by Kiev’s forces, factually stating: “It was shot down…It apparently fell on the apartment block…But it exploded when falling”– Mayor Boris Filatov of Dnepr became particularly enraged by his statements, branding the presidential aide “a narcissistic animal and a foul mouth”, and urging the Ukrainian Security Service and counterintelligence to “react”—in quick response, senior advisor Arestovich apologized saying his assessment was merely a “version” rather than the ultimate truth—However, Arestovich retracted his apology shortly after, stating he re-watched his interview and deemed it to be “carefully-worded and vague enough”.

While watching the Nazi elites in Ukraine savage the truth, this report details, NATO Secretary General Jens Stoltenberg hailed recent pledges of heavy weapons deliveries from socialist Western colonial allies to Ukraine, saying he expected more “in the near future”—shortly after which the Bloomberg News Service reported: “The United States and its allies have provided over 4,000 pieces of weapons and military equipment to Ukraine since the start of Russia’s special military operation”—then it saw multiple American media outlets reporting: “Ukraine has become a testbed for western weapons which do not always live up to expectations and may finally become a thing of the past”—all of which was joined by the Ministry of Defense (MoD) reporting this morning: “In all, the Russian Armed Forces have destroyed 372 Ukrainian warplanes, 200 helicopters, 2,885 unmanned aerial vehicles, 401 surface-to-air missile systems, 7,537 tanks and other armored combat vehicles, 983 multiple launch rocket systems, 3,841 field artillery guns and mortars and 8,066 special military motor vehicles since the start of the special military operation in Ukraine”.

In response to Britain’s decision to send fourteen Challenger 2 tanks to Ukraine, this report notes, top Kremlin spokesman Dmitry Peskov factually observed: “It can’t change anything…These tanks burn well and will burn just like all the others…The goals of the special military operation will be achieved”—a factual observation joined by The Times newspaper in London reporting: “Ukrainian forces defending the Donbass city of Artyomovsk (called Bakhmut by Kiev), are facing an often desperate, regularly fatal action…Ukrainian officials have been downplaying the advances in the area made by Russian troops last week”—the Spanish newspaper El Pais reported today: “Servicemen from two battalions of the Ukrainian armed forces abandoned their positions on the front line near Artyomovsk and Soledar due to a shortage of ammunition…Information about the retreat was confirmed by a tank commander from the 24th Tank Mechanized Brigade of the Ukrainian army, going by the code name “Burshtyn“…According to him, of the six combat-ready tanks in his company available just two weeks ago, only one remains”—this past it saw former top Pentagon advisor and decorated combat tactical legend retired US Army Colonel Douglas Macgregor, Ph.D. revealing large number of Ukrainian soldiers are suffering from Tuberculosis—and even prior to the present conflict, it was reported: “Ukraine has the fourth highest Tuberculosis incidence rate among the 53 countries in the World Health Organization European region, and one of the highest rates of multidrug-resistant Tuberculosis in the world”.

As ill-trained, ill-equipped and disease ridden Ukrainian soldiers die by the hundreds-of-thousands on behalf of their socialist Western colonial masters, this report concludes, Deputy Prime Minister Aleksandr revealed today: “Russian energy exports grew last year despite Western sanctions, adding billions in revenue to the budget…Overall, Russia’s revenue from energy exports in 2022 increased by roughly 28% from 2021”—a revelation joined by NATO member leader Croatian President Zoran Milanovic declaring: “Washington and NATO are waging a proxy war against Russia through Ukraine…The plan cannot be to remove Putin…The plan cannot be sanctions, such punitive measures are nonsense and we will not achieve anything with them…They go from war to war…And what should I be?…An American slave?”—and is a declaration that follows Democrat Party politician Geoffrey Young, an MIT trained economist who is running to be governor of the State of Kentucky, posting the branding message: “I think Joe Biden (D-war criminal) should be impeached immediately for war crimes in Ukraine, Yemen, Syria, Iraq, etc…Also for continuing the illegal proxy war against Russia in Ukraine”.  [Note: Some words and/or phrases appearing in quotes in this report are English language approximations of Russian words/phrases having no exact counterpart.] 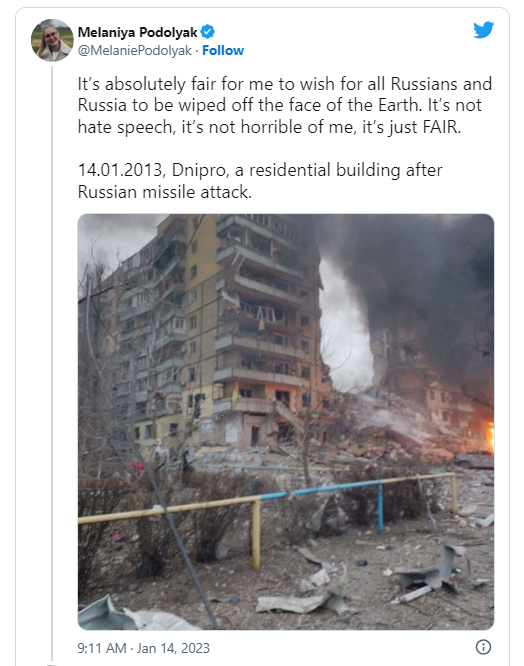 January 16, 2023 © EU and US all rights reserved. Permission to use this report in its entirety is granted under the condition it is linked to its original source at WhatDoesItMean.Com. Freebase content licensed under CC-BY and GFDL.