A disturbing new Security Council (SC) report circulating in the Kremlin today first noting Foreign Minister Sergey Lavrov stating about a possible meeting between President Putin and Supreme Socialist Leader Joe Biden: “In the course of the next contact between our presidents, its time and other parameters are now being discussed, the topic of Ukraine will definitely emerge one way or another”, says the issue of Ukraine has risen to the level of critical importance after Ukrainian Brigadier General Kyrylo Budanov shockingly revealed his troops have fired, and say they will keep fireing American-made Javelin anti-tank missiles into the disputed regions controlled by Russian speaking Ukrainian separatists—an illegal war crime revelation Foreign Minister Lavrov responded to with the statement: “Warmongering is the only word I can think of to describe Kiev’s aggressive plans…They are threatening to use the Javelin and they have already used the Bayraktar…They have never said they did that accidentally…Its use is categorically outlawed under the Minsk agreements…They declared that with pride this belligerent rhetoric is being stepped up apparently reflects the wish to stage some provocation and to send the conflict into a hot phase”.

This transcript next sees Security Council Members reviewing just issued Ministry of Defense (MoD) urgent war bulletins, one of which says the United States is planning to send more lethal aid to Ukraine to counter a non-existent Russian military buildup, and another one reveals: “Russia and the Association of Southeast Asian Nations (ASEAN) will hold the first ever joint naval drills off Indonesia…The Russia-ASEAN naval drills will take place in the area of North Sumatra in Indonesia’s territorial waters on 1-3 December…The large anti-submarine warfare ship Admiral Panteleyev will represent Russia in the drills”.

At the same time the 25th energy firm in Britain went bankrupt because of skyrocketing natural gas prices, that caused British household gas bills have rise by 28.1% and electricity bills 18.8% in the year to October, this report notes, yesterday it saw the socialist Biden Regime slamming more sanctions on the Nord Stream 2 natural gas pipeline able to alleviate this European energy crisis—insane and unjust sanctions Russian Ambassador to the United States Anatoly Antonov quickly responded to with the statement: “The US administration, both Republicans and Democrats, has been trying to complicate the Russian-European energy cooperation for several years now…At first, Washington wanted to disrupt the completion of the pipeline…Failed: the gas-main has been laid and is ready for the launch…Now they are trying to delay the commissioning of the facility, while simultaneously calling on Russia to increase energy supplies to Europe in order to minimize the consequences of the fuel crisis…Dialogue through sanctions is unacceptable and violates international law…We regard all attempts to impede Russian oil and gas exports to Europe as unfair competition, undermining the free market principles”.

In trying to ascertain what exact “market principles” the socialist Biden Regime are adhering to, this transcript sees Security Council Members grimily noting the declaration just made by the West’s most revered climate change scientist Professor David Suzuki, who just threatened: “This is what we’re come to…The next stage after this, there are going to be pipelines blown up if our leaders don’t pay attention to what’s going on”—a threat to start blowing up pipelines socialist leader Biden quickly responded to today by ordering the release of 50-million barrels of crude oil from his country’s emergency stockpile to battle rising gasoline prices instead of completing the pipelines America desperately needs—is the same emergency stockpile that Biden has already been taking millions-of-barrels of oil from to secretly sell to Asian countries—and because of Biden’s insane no-pipeline energy policy, is why a fleet of Russian tankers carrying million-of-barrels of diesel fuel is nearing the Eastern Coast of United States before the Americans living there freeze.

This transcript next sees Security Council Members reviewing urgent dispatches received by the Ministry of Foreign Affairs (MoFA) over the past 24-hours from its embassies and consulates abroad, one of which coming from the Russian Federation Embassy in the Republic of Belarus reveals American citizen Evan Neumann, the 6 January political prisoner who fled to Belarus for political asylum, publically stated: “The Trump supporters in California – the ones that I knew – don’t really congregate, and everybody’s on the down-low about it…Every now and then, somebody comes to me secretly, quietly – everything has to be secretive…Otherwise, you’re socially ostracized”.

In the urgent dispatch received from the Consulate General of the Russian Federation in New York, it sees MoFA diplomats noting that yesterday was the 58th anniversary of the 22 November 1963 public execution of President John F. Kennedy, who was the first American president to labeled a terrorist and threat to national security—then it notes that yesterday, the consulate received a telephonic message from American citizen Malikah Shabazz requesting a meeting  with MoFA officials—a request approved by the MoFA, but when attempting to inform Ms. Shabazz of the appointment date and time about two-hours after her request was made, she was discovered dead in her New York City home.

As to be expected, vast portions of this transcript dealing with Malikah Shabazz are classified at the highest level “Of Special Importance”—but in the limited portions of this transcript permitted to be openly discussed among various ministries, it reveals that she was the 56-year-old daughter of assassinated American civil rights leader Malcolm X—and whose reason for contacting the Russian consulate in New York City, as best as can be pieced together, involves the FBI last week exonerating her father’s assassins linked to radical black Islamic leader Louis Farrakhan—the secret hidden ties between socialist President Barack Hussein Obama and Louis Farrahkan—and why Obama received a staggering $100-millon from leftist multi-billionaire tech mogul Jeff Bezos yesterday—the latter of which appears to what caused her to reach out to Russian authorities.

In 1995, this report continues, Qubilah Shabazz, another daughter of Malcolm X, and older sister of Malikah Shabazz, was arrested and charged for conspiring to kill Louis Farrakhan when she hired a hit man to exact revenge—and were charges never allowed into court because she was forced to accept a plea deal and take psychiatric drugs to destroy her mind.

On 3 December 1964, this report concludes, Malcolm X made a surprise visit to Oxford University, in London, to deliver an address—an address wherein he told black Americans they would be respected by whites if they began defending themselves—then afterwards it saw him stunning everyone with the revelation “They’re going to kill me soon”—a stunning revelation preceded by Malcolm X slamming socialist Democrats for only using blacks for votes, and doing nothing for them after elected—before he was brutally assassinated saw his closest friends revealing: “Malcolm’s ideas were in a process of transition…He was moving away from a narrow and claustrophobic form of identity politics that had become politically crippling…He broke with black separatism in public, declaring that intermarriages between races were fine and that black and white people had to get together and fight the system”—a vision of American black and white unity Malcolm X added to with declarations  like “Be peaceful, be courteous, obey the law, respect everyone; but if someone puts his hand on you, send him to the cemetery” and “If you’re not careful, the newspapers will have you hating the people who are being oppressed, and loving the people who are doing the oppressing”—are declarations as true for Kenosha today as they were Malcolm X during his times—which makes it no wonder why Biden and socialist demons would kill anyone even daring to do anything to remind Americans, especially blacks, who Malcolm X was and what he really stood for.  [Note: Some words and/or phrases appearing in quotes in this report are English language approximations of Russian words/phrases having no exact counterpart.] 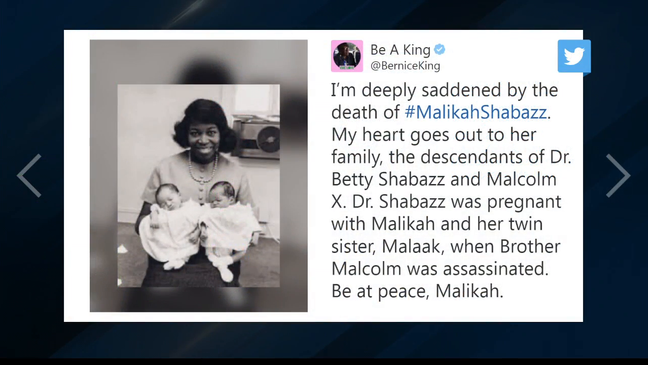 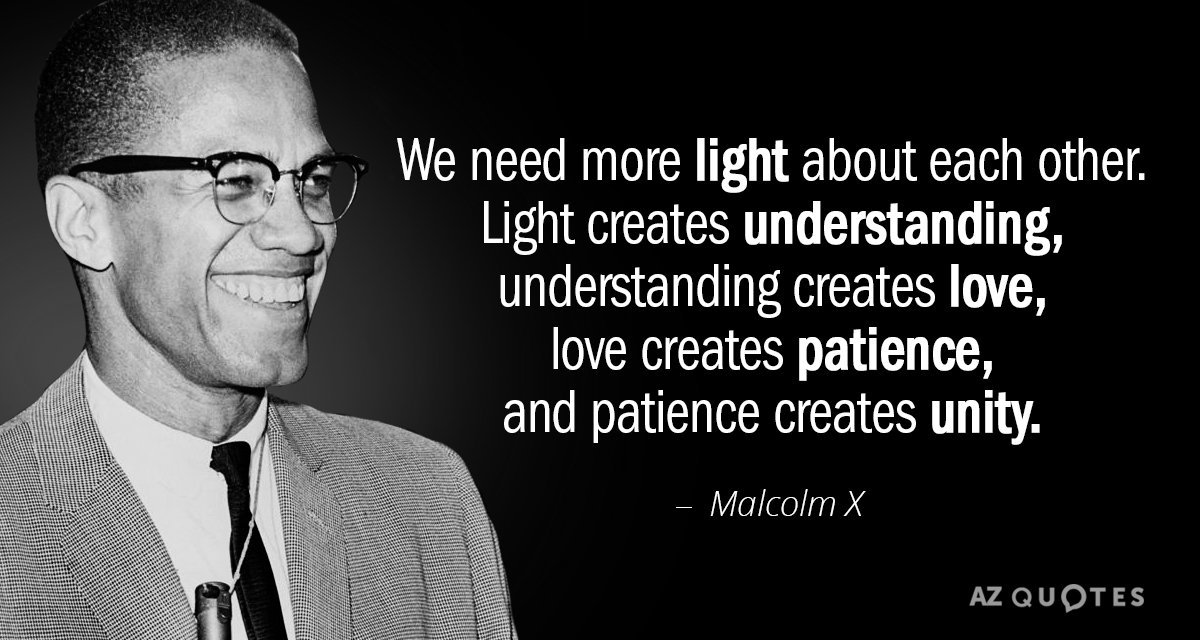 November 23, 2021 © EU and US all rights reserved. Permission to use this report in its entirety is granted under the condition it is linked to its original source at WhatDoesItMean.Com. Freebase content licensed under CC-BY and GFDL.