Repost by Permission: “Ladies And Gentlemen, The Dollar Emergency Has Arrived” Meets “Phoniest War Of All Time”

“Ladies And Gentlemen, The Dollar Emergency Has Arrived” Meets “Phoniest War Of All Time”

A compelling new Security Council (SC) report circulating in the Kremlin today confirming President Putin will take part in the events on the occasion of the Navy Day in St. Petersburg on Sunday, says also confirmed is that he will hold his annual question and answer session from ordinary citizens of Russia and other countries live on air, known as the Direct Line with Vladimir Putin, with the date to be determined in September.

With the Kremlin acknowledging that President Putin has a “busy schedule”, this report notes, it comes at the same time articles are appearing like “A Panicking Biden Administration Seeks Talks With Russia”—are articles documenting the socialist Biden Regime furiously attempting to talk to Russia about a prisoner swap, whose historic negotiations about have always been kept secret until deals are reached—in response to this blatant break with normal protocols in such matters Foreign Minister Sergey Lavrov said he will “pay attention to this request when time permits”—in a further response top Kremlin spokesman Dmitry Peskov said “there are no plans” for any talks between President Putin and Supreme Socialist Leader Joe Biden, and when asked if Moscow sees any change in the West’s position on the Ukrainian crisis, he plainly stated: “No, it does not”.

Though firmly rebuffed by top Kremlin officials whose busy schedules don’t allow them to engage in useless chatter with socialist Biden Regime idiots or their demented leader that can’t complete whole sentences, this report continues, Socialist Leader Biden and his handlers did manage to get through a two-hour call yesterday with Chinese President Xi Jinping, who bluntly warned them: “Play with fire and you will get burned”—a blunt warning caused by top socialist Democrat Party lawmaker House Speaker Nancy Pelosi planning to visit Taiwan, that China considers its sovereign territory—a war provoking visit Chinese state media revealed about: “The Chinese People’s Liberation Army will not sit idly by if Pelosi visits Taiwan island…It is well prepared for all the possible challenges if Pelosi visits the island, and they advised the PLA Rocket Force to conduct drills with new missiles targeting any possible US aircraft carriers and other large military vessels that may be involved in Pelosi’s visit”—a revelation of war that follows Chinese Rear Admiral Luo Yuan declaring that China’s new and highly capable anti-ship ballistic and cruise missiles were more than capable of hitting US carriers, despite them being at the center of a ‘bubble’ of defensive escorts, saw him assessing that “the loss of one super carrier would cost the US the lives of 5,000 service men and women, and sinking two would double that toll”, then he proclaimed: “What the United States fears the most is taking casualties…We’ll see how frightened America is”—a Chinese military declarative threat to sink US aircraft carriers now joined by articles appearing like “US Carrier Battle Group Steams Toward Taiwan as Pelosi Invites More Lawmakers on Island Visit”—all of which comes at the same time British National Security Advisor Stephen Lovegrove sounded the alarm that the Western colonial powers communication problem with Russia and China may lead to a global nuclear war.

With the European Union already implementing energy rationing due to its self-destructive sanctions on Russia over the “Special De-Nazification Operation” to liberate Ukraine, this report notes, it caused EU member leader Hungarian Prime Minister Viktor Orban to warn that unless peace is reached in Ukraine: “We will not be able to solve any problems, there will be no energy, and the entire European Union will be pushed into an economic situation of war”.

Standing as the main obstacle to peace in Ukraine, however, this report details, is Socialist Leader Biden, who after the United States officially plunged into a recession yesterday proclaimed like a lunatic: “We are on the right path”—is a lunatic socialist “right path” proclamation greeted today by the Wall Street Journal economic article “The Dollar Emergency Is Worse Than You Think”, wherein it grimly warns: “Ladies and gentlemen, the dollar emergency has arrived…Currency exchange-rate chaos is becoming an economic headwind and creating a crisis for capitalism”—and is a grim warning joined by top Fox Business News financial analyst Charles Payne, who, after examining the economic data the leftist mainstream media is keeping hidden from the American people, gravely declared: “Second quarter data suggests we are in a depression, not a recession”.

While Russian military forces continue their unstoppable obliteration of Ukraine’s ill-trained and ill-equipped fighting forces, this report continues, yesterday it saw Ukrainian President Volodymyr Zelensky warning that “Ukraine will lose its ability to function as a viable state”, said “the next few weeks will determine the country’s fate”, then he demanded that the socialist Biden Regime to send him more weapons and the American military personal to use them—are American weapons Ukraine used early this morning to target a prison housing their own POWs killing at least 53 of them—and as the Ministry of Defense (MoD) explains, was an “outrageous” targeting by Ukraine of their own POWs, whom they don’t want their own citizens to know voluntarily surrendered and were being treated humanely by Russia.

Within minutes of Ukraine murdering their own POWs with American-supplied long-range missiles, this report concludes, Ukrainian Foreign Minister Dmytro Kuleba accused Russia of committing a war crime and posted the message: “I call on all partners to strongly condemn this brutal violation of international humanitarian law and recognize Russia as a terrorist state”—is a provable lying accusation coming at the exact same time socialist Democrat Party lawmakers are preparing to pass a resolution declaring Russia to be a terrorist state—a resolution if passed would be an American declaration of war against Russia, which is why Secretary of State Antony Blinken declared only he can slap that label on a country—in viewing this dangerous socialist warmongering propaganda it caused Sky News Australia host Cory Bernardi to break with the leftist media narrative and say “everything we are told” about the Russia-Ukraine conflict should be taken “with a huge dose of salt”—a break with the leftist media narrative quickly joined by famed Australian journalist Caitlin Johnstone, who, in her just published article “The Phoniest, Most PR-Intensive War Of All Time”, truthfully states:

Call me crazy, but I’m beginning to suspect that there might be a concerted effort to manipulate the way we think about the war in Ukraine.

In fact, I’d even go so far as to say it’s the most aggressively perception-managed war we’ve ever experienced.

Since Russia invaded Ukraine in February we have not only been smashed with mass media propaganda unlike anything we’ve ever seen while Russian media are purged from the airwaves, we’re also seeing the new media element of unprecedented amounts of online censorship, algorithm-boosted propaganda, and social media trolling.

So we’ve literally never seen this much overall effort put into manipulating the way the public thinks about a war.

Which makes sense, given that it’s a profoundly dangerous proxy war which stands to benefit ordinary people in no way, shape or form. 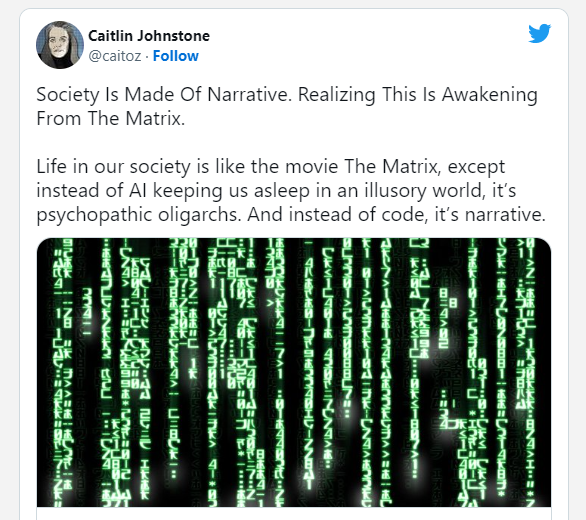 July 29, 2022 © EU and US all rights reserved. Permission to use this report in its entirety is granted under the condition it is linked to its original source at WhatDoesItMean.Com. Freebase content licensed under CC-BY and GFDL.