An historical-themed new Security Council (SC) report circulating in the Kremlin today first noting President Putin addressing a group of young entrepreneurs, engineers and scientists in Moscow, ahead of the upcoming session of the St. Petersburg International Economic Forum, about the Western colonial sanctions imposed on Russia over the “Special De-Nazification Operation” to liberate Ukraine, with him telling them: “For example, they limit the exportation of our fertilizers – and their prices go up, far more than here…They try to limit our energy exports, and their prices go sky-high…This is solely the result of the huge mistakes they themselves made…And now they’re trying to, forgive me ladies, cover up a certain spot by blaming everything on Russia…They even try using my name to label their inflation, but the reality is we have absolutely nothing to do with it!”, says next it saw top Kremlin spokesman Dmitry Peskov saying Western colonial threats to isolate Russia are impossible, with him stating: “It is impossible to isolate Russia, despite the fact that countries unfriendly, or rather hostile to us, are trying to isolate us economically, politically, and in the sphere of trade…They cannot and will not succeed, because in today’s world it is impossible to isolate a country, especially such a huge country like Russia”.

Immediately following President Putin making his address, this report notes, the Western colonial leftist media propaganda machine began drawing parallels between Peter the Great’s founding of St Petersburg and modern-day Russia’s ambitions because President Putin factually stated: “There have been times in our country’s history when we have been forced to retreat, but only to regain our strength and move forward”—then it saw these Westerners melting down when President Putin told this group of young entrepreneurs: “You get the impression that by fighting Sweden Peter the Great was grabbing something…He wasn’t taking anything, he was taking it back”—after which these Westerners collapsed in terror when President Putin asserted: “There is no state in between…A country is either sovereign or a colony”.

Since these Westerners are now showing interest in Russian history, this report continues, this transcript sees Security Council Members suggesting they might direct their attention to the 2008 article published by Scientific American entitled “U.S. And Soviet Spooks Studied Paranormal Powers To Find A Cold War Advantage”, wherein it reveals about the United States: “The Defense Advanced Research Projects Agency (DARPA) is well known for pushing the boundaries of science and technology in search of ways to give the U.S. military an edge—robotic pack animals, self-navigating vehicles and plant-based jet fuel, to name a few…Less well known is the agency’s Cold War-era investigation into how paranormal phenomena like extrasensory perception might be used by the U.S. to get a leg up on the former Soviet Union and, perhaps more importantly, by the USSR against the United States”—and sees it noting about the former Soviet Union: “Soviet research on telepathy dates from the early 1920s when a program was established at the Institute for Brain Research at Leningrad State University”.

When examining the history of telepathic and physic research in the former Soviet Union, this report details, most important to notice is that it was controlled by the Committee for State Security, that’s most commonly know in the West by its acronym KGB, the main intellignece directorate of the Soviet Union (President Putin was a top KGB intelligence officer) whose modern day successor is the Foreign Intelligence Service (SVR)—and during the Cold War, was telepathic and physic research conducted for the KGB by corresponding member Professor Alexander Spirkin of the Academy of Sciences of the Soviet Union, whose only declassified and translated into English scientific research papers entitled “Dialectical Materialism” describes the psychic and spiritual abilities of human beings residing in the “Consciousness of the World”.

Based on the research conducted by Professor Spirkin, this report continues, the KGB created a detachment of “combat psychics” during the Cold War, with the only one left living into the 21st Century being 86-year-old former “combat psychic” Ivan Dmitrievich Fomin, who accurately predicted catastrophes and disasters, like, in December-1988 he warned about an earthquake in Armenia, and, in the spring of 2002, when he foresaw the crash of the helicopter of the governor of the Krasnoyarsk Territory Alexander Lebed—today he’s known and revered for being the Baba Vanga of Russia, the late world renowned Bulgarian mystic— most recently saw him saying he’s “very worried and afraid” for the future of Ukrainian President Volodymyr Zelenskyy, and stated: “I’ll be honest, I’m worried, but I don’t see the outcome…I’m confused in thoughts, in deeds…He will think it all over with time, but it will be too late…With his unstable psyche, he is similar to President Joe Biden…Therefore, they work on the same vibrations”—and in looking into the future, he expressed confidence that Zelensky would not see the end of his term and would renounce the presidency himself, he even sees the exact date of surrender he e says can happen in September, and for some reason he calls the number 17. [For English translation click HERE]

As to the “same vibrations” seen by former KGB “combat psychic” Fomin causing both President Zelensky and Supreme Socialist Leader Joe Biden to have the same “unstable psyche”, this report concludes, shocking confirmation of why this is so is now revealed in a just released video showing Zelenskyy, prior to his becoming the president of Ukraine, saying “I love cocaine it gives me energy every day”—while president it saw Zelenskyy putting out a video where he is obviously high on either cocaine or crack cocaine—in another video it sees President Zelenskyy sitting at his desk with a pile of cocaine—a video that now joins one of a naked Hunter Biden high on crack cocaine waving around a gun—the same Hunter Biden whose father Socialist Leader Biden declared him to be “The smartest person I know”—all of which has now been joined by the just published New York Post beyond belief article “Insiders – And Hunter Himself – Say Scandal-Clad Frst Son Is Joe Biden’s ‘Closest Adviser’”, wherein it reveals teeth rotted out crack cocaine addict Hunter Biden is in control of America, and cites him proclaiming: “I’m better than my dad … because my dad tells me I’m better than him since I was 2 years old…All those fears you think that I have of people not liking me or that I don’t love myself … I don’t fear that because the man I most admire in the world that is God to me thinks I’m a god”.  [Note: Some words and/or phrases appearing in quotes in this report are English language approximations of Russian words/phrases having no exact counterpart.] 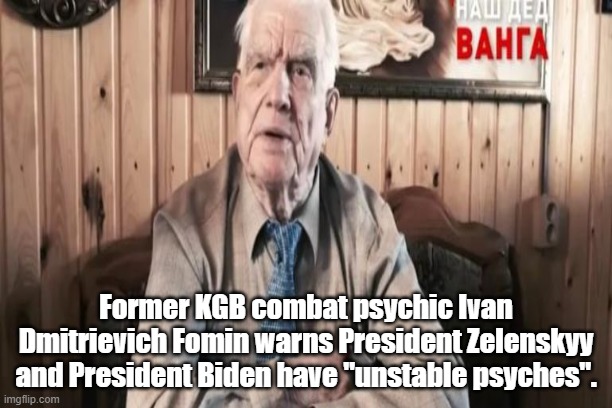 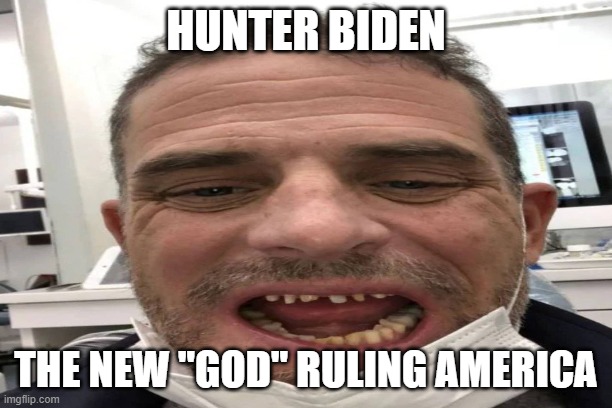 June 10, 2022 © EU and US all rights reserved. Permission to use this report in its entirety is granted under the condition it is linked to its original source at WhatDoesItMean.Com. Freebase content licensed under CC-BY and GFDL.