A foreboding new Security Council (SC) report circulating in the Kremlin today first noting Pope Frances proclaiming to the world this morning: “A few years ago, it occurred to me to say that we are experiencing World War 3 in bits and pieces…Here, for me today World War 3 has already been declared…And this is an aspect that should make us reflect…What is happening to humanity that has had three world wars in a century?…And this is bad for humanity, it’s a calamity”, says joining this dire proclamation it saw French President Emmanuel Macron grimly announcing: “France has entered into a war economy in which I believe we will find ourselves for a long time”.

Adding to his proclamation that World War III has already been declared, this report notes, Pope Francis stated his belief it was provoked by the Western colonial powers, and assessed: “The worst problem is that we do not see the overall drama was to a certain extent provoked or not prevented…It’s very sad, but in the final count, that’s the point…Some may tell me that I am in favor of Putin…This is not so…It would be an oversimplification and a mistake to say so…I am simply against confining the complexity of the ongoing devastation to division into good and bad, without giving thought to the roots and interests that are extremely complex…We must not forget about the problems in order to try to solve them”.

As one has come to expect from the actually insane socialist Western colonial powers and their lunatic lying leftist media lapdogs, this report continues, the dire proclamation of World War III made by Pope Frances is being ignored and replaced with such antics like Mayor Muriel Browser of Washington D.C. illegally adding a 51st star to the American flag and ordering them flown throughout the capitol city of the United States during today’s Flag Day celebrations—a nonsensical claim that Washington D.C. is the 51st State of the United States now hotly contested by European Parliament Member Mislav Kolakusic, who just declared: “EU foreign, defense and security policy today can be described in a single sentence…The European Union has became the 51st federal state of the United States, but without the right to vote”—after which he advised the European Union: “We should ban the import of oil and gas from the United States, which has been in more military conflicts than any other country in Europe and perhaps the world in recent decades”.

In a demonic move to enforce Western colonial white racial purity, this report details, yesterday it saw British courts upholding the racist government order to ship Black African asylum seekers to the African nation of Rwanda—a demonic move of racial purity coming at the same time Britain freely admits white Ukrainian asylum seekers—sees this occurring at the same exact moment British citizens are being crushed into poverty by record high fuel prices—likewise in Germany its citizens are being crushed into poverty by 50-year high inflation—all of which has now been joined by Germany announcing it has revived its Nazi-era tank brand Panzer, whose blitzkrieging forces during World War II eradicated tens-of-millions of sub-human Russian Slavic and Jewish peoples.

Because the greater masses of Americans have been socialist indoctrinated to the point of them being mindless idiots like occurred to Germans under socialist Nazi rule, this report notes, their inability to understand the principal of causation (cause-and-effect) today sees them puzzled as to why two of their NASA satellites over the past fortnight fell into the ocean after failed launches—an actual effect whose cause was Russia refusing to sell NASA rocket engines because of the Western colonial sanctions imposed over the “Special De-Nazification Operation” to liberate Ukraine—in the greatest looming cause-and-effect disaster awaiting these unsuspecting Americans sees it being best described in the just published article “Russia Could Shut Down Huge Chunk of US Power Grid in One Move”, wherein it warns: “A Russian decision to halt the supply of enriched uranium to US power companies would take many of America’s nuclear reactors offline within a year, leading to a spike in electricity prices beyond the current price inflation, and potentially leaving some areas of the country unable to meet demand”—but, most certainly, is a principal of causation fully known about by Supreme Socialist Leader Joe Biden, as evidenced by it now being reported: “The Biden administration has been quietly urging agricultural and shipping companies to buy and carry more Russian fertilizer”.

Likewise proving that Socialist Leader Joe Biden knows the catastrophic consequences of not adhering to the principal of causation, this report continues, is the just published New York Post article “Biden ‘Really Aware’ Of Stock Slide That Erased All Gains Since Trump”—a catastrophic wipeout of American wealth joined yesterday when US markets lost over $1.3-trillion in a single day—is a wholesale socialist destruction of American predicted would happen by President Donald Trump in 2020—a prediction that’s now joined by powerful American social media personality Jake Paul having just sent out a brutal viral message to his millions of followers saying: “Biden accomplishments…1. Highest gas prices…2. Worst inflation…3. Plummeting crypto prices…4. Highest rent prices ever…5. Created new incomprehensible language…If you’re reading this and voted for Biden and you still don’t regret it then you are the American problem”.

While Socialist Leader Biden continues his destruction of America, this report concludes, yesterday he pledged to send $1.5-billion monthly to Ukraine and United States Deputy Secretary of Defense Kathleen Hicks said that America is preparing to arm Ukraine for years to come—in response to this lunacy it saw Ukrainian President Volodymyr Zelenskyy vowing to liberate the Russian territory of Crimea and the independent republics of Donetsk and Lugansk—a lunatic vow immediately joined by top President Zelensky adviser Mykhailo Podolyak blasting the sparse amount of weapons the West has given Ukraine, with him telling them: “If you think we should lose, just tell us directly ‘we want you to lose’”—near immediately after which the leftist New York Times observed: “Arming Ukraine is not turning the tide…Is the answer vastly more weapons, as Ukraine says, or a bitter truce?”—as Ukrainian forces continue to suffer significant losses, NATO Secretary General Jens Stoltenberg suggested that a peace a deal with Russia will come at a price, as Kiev may have to cede some territory to achieve this—after the last bridge linking the eastern city of Sievierodonetsk with Ukrainian-controlled territory to the west has been destroyed yesterday, it saw these trapped and encircled Ukrainian nationalist given the two options “surrender of die”—and in the latest urgent war bulletins issued by the Ministry of Defense (MoD), it sees the most notable of them being:

“The Russian army will not need additional conscription because of the special operation in the Donbass, Viktor Bondarev, head of the Federation Council committee on defense said on 14 June…”There are enough volunteers who themselves go to restore order there,” Bondarev told reporters…He also added that achieving the goals of the operation is “a matter of time” and criticized the actions of the Armed Forces of Ukraine, which are covered by civilians…“Hiding behind a human shield, they do not allow our troops to go by leaps and bounds. Due to the fact that civilians are being driven there and, of course, our army and the National Guard have to work selectively, ”said Bondarev…In order to protect the Russian border regions from shelling, Bondarev called for the destruction of Ukrainian neo-Nazis and members of foreign legions who help them”.

“The Russian Ministry of Defense invited the militants of the national battalions and foreign mercenaries at the Azot plant to stop hostilities and lay down their arms”.

“In the area of ​​​​Novomikhailovka in the Donetsk People’s Republic, more than 30 servicemen of the 25th battalion of the 54th mechanized brigade of the Armed Forces of Ukraine, who were at a strong point in the area of ​​the Zveroferma, decided to surrender…They turned on the radio to the Russian command, asked to cease fire and provide a corridor for the exit…At about 22:00, the Ukrainian military with white flags began to advance towards the Russian positions…A detachment of Ukrainian nationalists, who arrived at the stronghold on armored vehicles, opened crossfire at the servicemen of the 54th brigade of the Armed Forces of Ukraine in the back…As a result of this shooting, 32 Ukrainian servicemen were fatally wounded and killed”.

“The Kiev-appointed mayor of Sviatogorsk, Vladimir Bandura, has switched his allegiance to the Donetsk People’s Republic (DPR) following the town’s liberation from Ukrainian forces…The official appeared in a video last week, accusing Kiev’s military of murdering Orthodox monks and setting a monastery ablaze”.

“Russian and DPR servicemen have still been nabbing one or two Azov nationalists at the Azovstal plant almost daily…All the war criminals are being identified, and investigative actions are being conducted with them…After the interrogation and indictment, the nationalists will be kept at pre-trial detention centers just like the rest of the criminals who surrendered earlier”.

“A total of nearly 20,000 foreign fighters are currently serving in volunteer units in Ukraine…almost a seventh of them are UK citizens, or almost 3,000”. 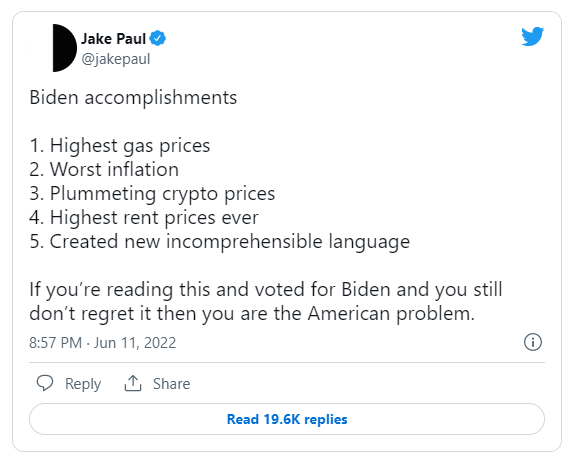 June 14, 2022 © EU and US all rights reserved. Permission to use this report in its entirety is granted under the condition it is linked to its original source at WhatDoesItMean.Com. Freebase content licensed under CC-BY and GFDL.