A troubling new Security Council (SC) report circulating in the Kremlin today first noting President Putin and Turkish President Recep Tayyip Erdogan agreeing to organize the next round of talks between the Russian and Ukrainian delegations in Istanbul, says this announcement was quickly followed by Supreme Socialist Leader Joe Biden claiming he did not call for regime change in Russia barely 24-hours after he ignited a global uproar by declaring about President Putin: “For God’s sake, this man cannot remain in power”.

Quickly joining Socialist Leader Biden, this report notes, it saw US Secretary of State Antony Blinken telling reporters in Israel: “As you know, and as you have heard us say repeatedly, we do not have a strategy of regime change in Russia — or anywhere else, for that matter”—shortly after which Ukrainian President Volodymyr Zelenskyy said his country is prepared to discuss adopting a neutral status as part of a peace deal with Russia, and said any agreement would need to be guaranteed by third parties and put to a referendum, with him stating: “Security guarantees and neutrality, non-nuclear status of our state…We are ready to go for it…This is the most important point”.

Near immediately after President Zelenskyy said his nation was ready to adopt a neutral status as part of a peace deal with Russia, this report continues, it beyond shockingly saw Secretary Alexey Danilov of the National Security and Defense Council of Ukraine urging Georgia to invade Russia to open a second war front—and in shocked response. it saw top Georgian parliamentary leader Nikoloz Samharadze exclaiming to reporters: “I hope this is a lie…Does the Secretary of the Security Council of Ukraine call on Georgia and others to abandon the policy of peaceful restoration of their territorial integrity, opening a second front to destroy our cities and villages, so that Georgian women and children die too?…Is this true?”.

As to the type of demons that would think of such barbaric things, this report details, it was put on full display for the entire world yesterday when Ukrainian Nazi forces released horrifying videos of them shooting bound and defenseless Russian POW’s in their legs and beating them senseless [WARNING: Videos in this link are shocking to the human senses]—and in immediate response to, it saw Director Alexander Bastrykin of the Russian Investigative Committee announcing a formal war crimes investigation has been opened. with his ordering investigators “to establish all the circumstances of the incident, collect and record evidence and identify all the persons involved in it to subsequently bring them to justice”.

At near the exact same moment these Ukrainian Nazi forces released the videos of them shooting and beating senseless bound and defenseless Russian POW’s, this report notes, Ukrainian President Zelenskyy slammed the NATO members who won’t send him warplanes saying they don’t have 1% of the bravery shown by Mariupol defenders—so-called “Mariupol defenders”  that were profiled by Australian state broadcaster ABC News in 2015, and in whose article “Ukraine Crisis: Inside The Base Of The Controversial Azov Battalion” factually stated: “The first thing you notice as you walk through the corridors of the Azov battalion’s base in Mariupol are the swastikas…There are many — painted on doors, adorning the walls and chalked onto the blackboards of this former school now temporary headquarters for the Azov troops”.

Among those brave enough to tell the truth about these so-called “Mariupol defenders” and their deeply ingrained Nazi ideology, this report continues, is Professor Tim Hayward at the University of Edinburgh, who this past week was viciously hammered because he revealed the truth that Azov Battalion Nazi fighters sheltered behind civilians in a theater in Mariupol, before blowing the building up as Russian forces entered the Ukrainian city—was a vicious hammering because Professor Hayward exposed the lying war propaganda narrative created by the Western colonial media about the “Special De-Nazification Operation” launched by Russia in Ukraine—and whose lying narrative is further exposed in truthful articles like “Propaganda Does Not Change The War – The Ukraine Is Still Losing”, wherein it notes such facts like:

In Makariv, another battleground town to the west of Kyiv that Ukrainian officials claimed to have recaptured this week, the fighting was also ongoing.  Vadym Tokar, the mayor, said in a telephone interview: “I don’t understand where this nonsense came from. It is not true. We have shelling and we have Russian tanks shooting into the town right now.”

The casualties Soviet forces suffered in 1943 when they liberated Donbas from then still first class German Wehrmacht forces.  Back then there were more than 1,000,000 Soviet soldiers involved against some 600,000 Germans.  Some 1,600 Soviet soldiers were killed each day in fierce fighting.  We are now supposed to believe that the much smaller operation against a less fierce and less capable enemy in the Ukraine is killing 550 Russian soldiers per day?  That’s obviously nonsense.

The U.S. has tried to use NATO and G-7 meetings to push the Europeans towards sanctioning Russian hydrocarbon exports. It also tried to attach China to Russia and to get the Europeans to sanction its biggest trading partner. Both attempts failed. There will be no additional sanctions on Russia. And while the NATO communique mentions China it only urges it to leave its neutral position. Everyone knows that that is not going to happen.  The only thing NATO agreed on is the release of a new load of fresh propaganda.

With articles now appearing in America like “And So It Begins: Hunter Biden’s Laptop and the Ukraine War Show How the Ruling Class Plans to Silence Every Single One of Us”, this report details, it was surprising today to see the leftist Washington Post admitting about itself: “We are not trusted because we are not entirely trustworthy”—an admission of truth the leftist New York Times has yet to make, and about whom is now being said: “It is the CNN of print journalism, and has done to its reputation what CNN did to its own–ruin it for short term political expediency”—a fact of political expedient ruination the New York Times displays in their just published article “How Russia and Right-Wing Americans Converged on War in Ukraine”, wherein it lyingly states: “After President Vladimir V. Putin of Russia claimed that action against Ukraine was taken in self-defense, the Fox News host Tucker Carlson and the conservative commentator Candace Owens repeated the assertion”—but in factual reality, neither Carlson nor Owens “repeated” anything said by President Putin, and as Owens revealed in her epic statement: “Received an email from The NYTimes asking for comment regarding me “advancing ideas that Ukraine is a corrupt country”—similar to Russian state TV…I replied informing them that I actually got my ideas from the New York Times, and provided them links to their own past articles”.

In further piercing through the lying Western colonial war propaganda about Ukraine, this report concludes, this past week it saw former top President Ronald Reagan administration official David Stockman stating: “We were already getting sick and tired of this Zelensky clown, but the sheer chutzpah of comparing Ukraine’s predicament with Pearl Harbor or 9/11 is just fricking outrageous…To the contrary, Ukraine is a cesspool of corruption, mal-governance and rank stupidity on the foreign policy front…For crying out loud, its situation is comparable to the drug cartels taking over Mexico”—this past week it also saw the world’s top podcaster Joe Rogan calling out journalists in the US who are treating Ukrainian President Zelensky as a war hero, but who previously called Ukraine a corrupt hellhole and its leader as a would-be authoritarian, then saw him saying, “the U-turn is confusing and stating: “This is one of the things that is so weird is that they were very disparaging of Ukraine…They were talking about the massive corruption of Ukraine and how horrible it was over there…And now all of a sudden they are looking at it like they’re heroes”—and to clear up any confusion people may have about what’s really going on, today it sees world renowned trends researcher Gerald Celente issuing a warning sure to terrorize every American:

To say our world is failing is a profound understatement.

I was born one year after the end of WWII, and crazy people will take you to war in the blink of an eye.

The war criminals are leading us into another war.

We are headed for an economic calamity the likes of which we have never seen in our lifetime.  They are getting our minds off it with the war in Ukraine.

We went from the Covid war to the Ukraine war, and now we’re headed to World War III.

This time, it will be much worse.

My plan centers around the three G’s:  guns, gold and a getaway plan.

Ukrainian Nazi demons protected by Supreme Socialist Leader Joe Biden and defended by the lying leftist Western colonial media shoot bound and defenseless Russian POW’s in their legs (above) before beating them senseless. 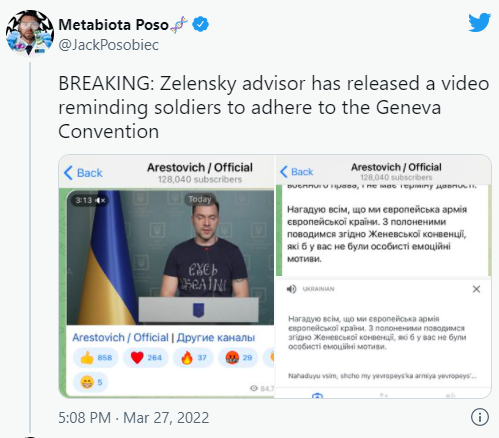 March 28, 2022 © EU and US all rights reserved. Permission to use this report in its entirety is granted under the condition it is linked to its original source at WhatDoesItMean.Com. Freebase content licensed under CC-BY and GFDL.