A forewarning new Security Council (SC) report circulating in the Kremlin today first noting top Kremlin spokesman Dmitry Peskov revealing this morning: “On Friday, President Vladimir Putin worked in the joint staff of military branches involved in the special military operation…The head of the state examined the staff’s work, was briefed about the special military operation’s progress, held a conference and separate meetings with commanders”, says these extensive military briefings on the “Special De-Nazification Operation” to liberate Ukraine were in preparation for President Putin and Defense Minister Sergei Shoigu traveling to Minsk on 19 December to hold high-level talks with Belarus President Alexander Lukashenko and Belarus Defense Minister Viktor Khrenin mapping out the final stages of the conflict.

Also earlier today, this report notes, the Ministry of Defense (MoD) revealed: “On Friday, 16 December, Russian Armed Forces dealt a massive strike with high-precision long-range air and sea-based weapon on Ukrainian military command and control systems, the military-industrial complex and the energy facilities of Ukraine that provide them…It is specified that all assigned objects were hit…Thanks to this massive strike, the Russian military disrupted the transfer of foreign weapons and ammunition and prevented Ukrainian reserves from moving into the combat areas…In addition, they stopped the work of the enemy’s defense enterprises”—in response to untrained Ukrainian forces unsuccessfully attempting to stop this massive missile attack by wildly firing their socialist Western colonial supplied weapons, the MoD reported: “Unprofessional actions of the Ukrainian air defense units resulted in damage to civilian infrastructure on the ground”—and after this massive missile barrage, Ukrainian Prime Minister Denis Smyhal reported: “To get through the winter we need about 17,000 large industrial-sized power plants”.

Shortly after the United States deployed an infantry company near the border of Russia, this report continues, top socialist Biden Regime official National Security Advisor Jake Sullivan declared: “We don’t know where this is going to end up…What we do know is that it’s our job to continue to sustain our military support to Ukraine, so they are in the best possible position on the battlefield, so that if and when the diplomacy is ripe, they will be in the best possible position at the negotiating table…That moment is not right now”—a declaration quickly joined by Ukrainian President Vladimir Zelensky proclaiming: “There are those who are urging me to sit at the negotiating table…But I don’t see anything to discuss…I don’t think they can produce any result”—a proclamation causing European Parliament member Florian Filippo to exclaim: “Zelensky reiterates that he refuses to negotiate peace with Russia!…This is complete madness and irresponsibility!”—and is socialist Western colonial war madness joined by the news: “Never Trump Republican and outgoing congressman Adam Kinzinger threatened violence against a popular cartoon cat Twitter account named @catturd2 (or commonly known as Catturd) over a Ukraine meme”.

At the same time America was struck with “Catturd madness”, this report notes, British Prime Minister Rishi Sunak requested a “data-driven assessment” of the situation in Ukraine on Friday, prompting fears that London might slow or stop the flow of supplies to Kiev—an “assessment” that follows British intelligence and “key figures in Whitehall” laughably saying they believe Russia has “effectively run out” of supplies—and is laughable because the more than 100 defense firms and arms manufacturers in the Sverdlovsk Region in Russia’s Urals are working six days a week and may increase shifts to 12 hours.

In knowing how close Russia and the socialist Western colonial powers are to launching nuclear weapons against each other, this report details, yesterday it saw senior American statesman former Secretary of State Henry Kissinger releasing his warning open letter “How To Avoid Another World War”, wherein he recounted everyone sleepwalking into World War I, urgently called for peace talks to begin, offered a proposal to end the conflict, and factually observed:

“As the world’s leaders strive to end the war in which two nuclear powers contest a conventionally armed country, they should also reflect on the impact on this conflict and on long-term strategy of incipient high–technology and artificial intelligence.  Auto-nomous weapons already exist, capable of defining, assessing and targeting their own perceived threats and thus in a position to start their own war.

Once the line into this realm is crossed and hi-tech becomes standard weaponry – and computers become the principal executors of strategy – the world will find itself in a condition for which as yet it has no established concept.

How can leaders exercise control when computers prescribe strategic instructions on a scale and in a manner that inherently limits and threatens human input?  How can civilisation be preserved amid such a maelstrom of conflicting information, perceptions and destructive capabilities?”

In response to Kissinger, this report further details, top Kremlin media advisor Petr Akopov released his open letter “Kissinger Is Ready To Give Russia Not Only The Donbass”, wherein he correctly notes Russia would never accept the proposals put forth by Kissinger, and factually observed:

“Historical parallels are a very useful thing, especially if you know and remember real historical experience.

And then it turns out that the First World War did not start because of European lunatics (that is, the Germans, French and Russians), but as a result of a well-built combination of the Anglo-Saxons to play off the continental powers.

And the defeat of Russia in it was the result of a double betrayal – by part of our elites and allies in the Entente, which led to the catastrophe of the February Revolution.

Russia has paid dearly for neglecting the lessons of history, and now it will not repeat its previous mistakes, will not back down and stop halfway.”

In the “real historical experience” known by Russia, this report explains, Supreme Socialist Leader Joe Biden branded President Putin as “a killer who is devoid of a human soul”—a branding that joined Socialist Leader Biden proclaiming he wanted an administration like socialist Democrat Party leader President Franklin Roosevelt—was a President Roosevelt who approved the document for postwar Germany written by his Treasury Secretary Henry Morgenthau Jr.—a document called the Morgenthau Plan that called for the total extermination of Germany—an investigation by FBI Director Herbert Hoover concluded the Morgenthau Plan was unworkable, and would result in up to 25 million Germans dying from starvation—after the Morgenthau Plan was published in September 1944, it saw President Roosevelt’s son-in-law, Lieutenant Colonel John Boettiger, who worked in the United States Department of War, explaining to Morgenthau how American troops had had to fight for five weeks against fierce German resistance to capture Aachen and complained to him that the Morgenthau Plan was “worth thirty divisions to the Germans”–in late 1944, it saw Roosevelt’s election opponent, Thomas E. Dewey, saying it was worth “ten divisions”—and though Morgenthau refused to relent, immediately after taking power when President Roosevelt died in office, President Harry Truman fired Morgenthau, scrapped the Morgenthau Plan, after which he instituted the Marshall Plan to save Germany and rebuild Europe, but not before he authorized atomic bombs to be dropped on an already defeated Japanese Empire.

Knowing the true history of socialist Democrats and their demonic bloodlust, this report notes, once President Putin fully determined that the United States was using Ukraine to conduct a proxy war against Russia, it caused him last month, on 9 November, to issue the decree “On Approval of the Fundamentals of State Policy for the Preservation and Strengthening of Traditional Russian Spiritual and Moral Values”—a decree that turned the special military operation in Ukraine into a total war in defense of the Russian Federation, wherein it declared:

The ideological and psychological impact on citizens leads to the planting of a system of ideas and values ​​alien to the Russian people and destructive to Russian society (hereinafter referred to as destructive ideology), including the cultivation of selfishness, permissiveness, immorality, the denial of the ideals of patriotism, service to the Fatherland, the natural continuation of life, values strong family, marriage, large families, creative work, Russia’s positive contribution to world history and culture, the destruction of the traditional family through the promotion of non-traditional sexual relations.

The destructive ideological impact on the citizens of Russia is becoming a threat to the demographic situation in the country.

The activities of public legal entities, organizations and individuals that contribute to the spread of destructive ideology pose an objective threat to the national interests of the Russian Federation.”

In preparation for total war against the godless socialist Western colonial powers, this report concludes, yesterday it saw Strategic Missile Forces Commander Sergey Karakaev revealing that Russia will be able to launch nuclear missiles from anywhere in its territory and Russia’s newest intercontinental ballistic missile, the RS-28 Sarmat (a multiple warhead super heavy ICBM able to fly over the South Pole), can penetrate any existing or future anti-missile systems—and for the likelihood of nuclear war, senior researcher Doctor-Scientist Vladimir Vasiliev at the Institute for US and Canadian Studies at the Russian Academy of Sciences just assessed: “America’s hopes that Russia’s military operation would play out in favor of Kiev and the collective West, and that the billions of dollars in aid sent to Ukraine would lead to a strategic defeat for Russia, have not been justified…In this respect, the question of a relative calm or even paralysis arises…Perhaps the West expects that in the near future, it will be able to escalate tensions, and that this may eventually spin out of control…And when that happens, the threat of using nuclear weapons would be the last resort…The West will resort to this threat if it considers Russia’s winter campaign in Ukraine successful”.  [Note: Some words and/or phrases appearing in quotes in this report are English language approximations of Russian words/phrases having no exact counterpart.] 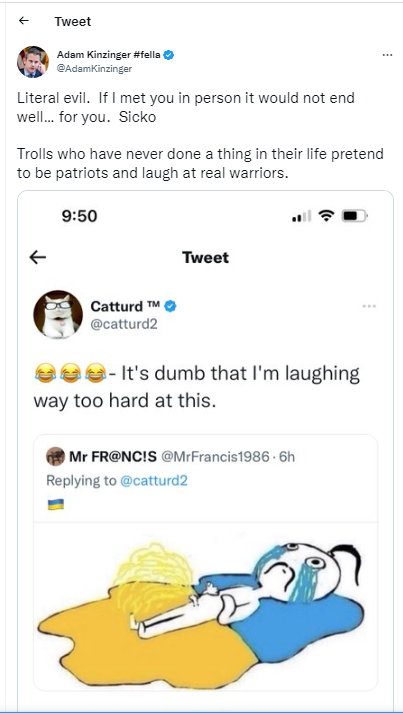 December 17, 2022 © EU and US all rights reserved. Permission to use this report in its entirety is granted under the condition it is linked to its original source at WhatDoesItMean.Com. Freebase content licensed under CC-BY and GFDL.