An insightful new Security Council (SC) report circulating in the Kremlin today noting the first face-to-face leaders summit of the Quadrilateral Security Dialogue, or “Quad”, took place in Washington yesterday, hosted by Supreme Socialist Leader Joe Biden with the prime ministers of Australia, Japan and India—Scott Morrison, Yoshihide Suga and Narendra Modi respectively, says this Quad summit heightens the threat of a US-led war against China, specifically because it follows the Australia-United Kingdom-United States (AUKUS) war pact to realign Western military forces in the Indo-Pacific Region to confront China—an AUKUS war pact that has shaken the transatlantic NATO alliance between the United States and Europe—so much so that NATO is now on the verge of collapse—in the biggest blow to NATO, yesterday saw its second largest member Turkey declaring it was going to buy more Russian-made S-400 air defense systems, and when asked whether the United States will be able to trust Turkey after that, Turkish President Recep Tayyip Erdogan responded with the statement: “I explained everything to Biden…We made a decision to buy F-35 planes and we paid $1.4 billion, but we have still has not received them…We also asked the US to sell us Patriot air defense systems, but we were denied…This is what I say in response: Who will share the risks regarding out security?…How are we supposed to take necessary measures amid the security risks?…Should we expect shipments of defense systems from countries that refuse to provide them to us?”.

For its part, this report notes, India’s reaction to the AUKUS announcement has been muted—while India has developed close strategic relations with America over the past decade, it was in the past a close partner with the former Soviet Union and is not a formal United States ally—today sees India being an observer member of the Shanghai Cooperation Organisation, initiated by China and Russia to counter US influence in Central Asia—and further sees India awaiting the arrival of its first Russian-made S-400 air defense systems its crews have already been trained to use, whose delivery is expected by the end of October.

This transcript sees Security Council Members alarmingly noting that these war pacts, realignment of military forces and alliances initiated by socialist leader Biden are eerily reminiscent of those taken by Nazi German leader Adolf Hitler in the lead up to World War II—a lead up to total war Hitler began by signing new war pacts with Italy and the Empire of Japan, and non-aggression pacts with Great Britain and the Soviet Union—were non-aggression pacts Hitler unilaterally abrogated when he declared war on Great Britain and the Soviet Union—though in hindsight everyone should have known this war was coming, most particularly because Hitler had turned the government of Germany and its media establishment into a vast socialist propaganda machine churning out nothing but lies.

When Hitler took power in 1933, this report details, his Nazi Party controlled less than three percent of Germany’s 4,700 papers—after which Hitler oversaw the elimination of the German multi-party political system, that brought about the demise of hundreds of newspapers—to replace these newspapers saw Hitler utilizing the new technologies of radio and television to mass indoctrinate the German people—new technologies that controlled all information while censoring and blacklisting anyone opposing the Nazi Regime—over the past 17-years has seen thousands of newspapers in the United States closing down—and today sees the new technologies of social media censoring and blacklisting anyone opposing the Biden Regime.

Critical to notice, this report continues, was Nazi Propaganda Minister Joseph Goebbels truthfully revealing: “Our way of taking power and using it would have been inconceivable without the radio”—a fact known to socialist leader Biden, who used his total control of social media to blacklist information about his son’s laptop prior to the election—social media that today is suppressing the truth that the Arizona audit of the 2020 Presidential Election found over 57,000 ballots in question in a vote Biden won by barely 10,000 votes—social media that today is spreading an outrageous lie that Border Patrol agents on horseback used whips against black illegal migrants—social media that’s suppressing the truth that Biden might owe the IRS $500,000—social media that’s suppressing the truth that Biden’s national security advisor Jake Sullivan was a major plotter with Hillary Clinton in cooking up the Russiagate hoax—and beyond all belief, is a socialist controlled media that yesterday began spreading Biden’s “Zero Lie” that his massive $3.5-trillion spending plan to change America forever doesn’t cost anything, about which the Wall Street Journal most accurately stated: “His spending blowout in jeopardy, Biden claims the cost is ‘nothing’…And so a talking point is born, or at least trying to be…The largest tax increase as a share of GDP and the largest entitlement expansion since the 1960s costs nothing…And money grows on trees”.

Most certainly knowing that “money doesn’t grow on trees”, this report concludes, is President Donald Trump, who this evening will preside over a massive Save America Rally in Perry-Georgia—a rally where President Trump says he’ll respond to the Arizona audit results, with his stating: “I will be discussing the winning results – which show 44,000 illegal ballots“—is a rally coming at the same time articles have begun to appear in America like “‘Miss Me Yet?’ As Bumbling Biden Makes Mess Of America, Trump Will Look Like The Messiah Come 2024”—and most terrifying to see by Biden and his socialist forces, was the world’s most popular podcaster Joe Rogan proclaiming yesterday to his over 100-million listeners: “Trump will probably win in 2024…The Democrats fucked up royally by making Joe Biden the President”.  [Note: Some words and/or phrases appearing in quotes in this report are English language approximations of Russian words/phrases having no exact counterpart.] 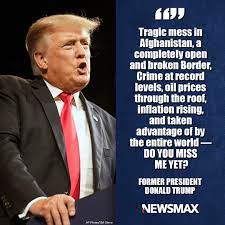 September 25, 2021 © EU and US all rights reserved. Permission to use this report in its entirety is granted under the condition it is linked to its original source at WhatDoesItMean.Com. Freebase content licensed under CC-BY and GFDL.