A forewarning new Security Council (SC) report circulating in the Kremlin today first noting that one of the “Big Three” credit agencies Fitch Ratings has downgraded its global GDP forecast due to pandemic-related setbacks, says this explains why global investors have been pouring money into the Russian stock market thanks to the country’s drive to curb inflation and its conservative fiscal policies—one of whose main beneficiaries of has been the Russian Ruble, that this year has seen its best performer among its emerging-market peers, and also has become one of the 20 most frequently used global currencies.

The greatest “setback” to the European Union severely limiting its economic outlook, this report explains, are natural gas prices smashing record highs as the EU debates limiting Russia exports—a debate now joined by Germany’s federal networks regulator BNA saying last week that it would decide no later than 8 January 2022 whether it will certify Nord Stream 2 and issue an operating license for this natural gas pipeline—is actual insanity because the Nord Stream 2 pipeline is complete and ready to fill Europe’s near empty storage tanks and caverns with natural gas from Russian Siberia before winter strikes—sees this lunacy occurring at the same time experts are warning that skyrocketing energy prices could cripple Europe’s economy—sees CEO Marco Alvera of Italian energy infrastructure company Snam SpA grimly warning: “It could get very ugly unless we act quickly to try to fill every inch of storage…You can survive a week without electricity, but you can’t survive without gas”—all of which caused Foreign Minister Sergey Lavrov to blast the EU Russophobes who seek to impose anti-Nord Stream 2 policy, with his stating: “We will communicate with those in the European Union who are ready for this…But, if we go according to this reasoning, if we analyze this, that no one should make decisions on their own affairs with Russia, but only through the European Union, then this may hint at someone in Brussels wanting to impose this belligerent minority’s policy on Nord Stream 2 upon everyone else”.

As this winter heating apocalypse for the Western world nears, this report notes, it comes at the same that the United Kingdom posted its biggest increase in inflation since records began—a crippling blow to the already under socialist economic siege British peoples now joined by their meat industry warning of an impending production halt as firms run low on CO2 supply—yesterday saw natural gas prices hitting record levels after a fire at a National Grid facility in Kent forced one of the UK’s crucial power interconnectors to close a result of the blaze, a 2 gigawatt cable, which connects the UK’s energy grid to France that will be offline for six months—is a market already tight due to a shortage of global natural gas supply—comes at the same of a period of low wind speeds has seen the amount of wind power capacity produced by the UK dropping off—today sees two industrial sites that produce a combined 40 percent of the UK’s fertiliser having been forced to halt operations due to recent record natural gas prices—all of which caused British Prime Minister Boris Johnson to frantically declare this morning: “We’ve got to try and fix it as fast as we can, make sure that we have the supplies that we want, make sure that we don’t allow the companies we rely on to go under”.

With Europe’s energy crisis driving up the price of natural gas worldwide, this report continues, this winter heating apocalypse is now crashing into the United States—a crisis that today sees US stockpiles of the so-called big 4—crude oil, gasoline, distillate, and jet fuel—are combined, now below 2018 levels—today sees the US warning that low inventories around the world has made heating fuel more expensive for Americans than it has been in years—sees the US reporting that propane is set up for a volatile ride this upcoming fall/winter season as supplies are about 20% below the five-year average for this time of year—saw natural-gas futures in the US ending Friday at $5.105 per million British thermal units, were about half that six months ago and have leapt 17% this month—today sees it being reported that the US Energy Information Administration on Thursday will give a fresh estimate of the volume of natural gas in storage, which it last estimated to be 16.5% less than a year ago, as now is the time of year when drillers fill storage tanks and caverns to get through winter, when demand is greatest and households are most exposed to higher prices in their heating bills—and most grimly sees it being reported today: “Supplies have been depleted by a series of weather events…February’s freeze in Texas lifted demand while clogging wells with ice…June and July were the hottest on record and drought out West dried up hydropower production, which meant more gas than normal was needed to power air conditioners…Late last month Hurricane Ida forced nearly all of the Gulf of Mexico’s gas output offline…More than a third of the Gulf’s gas production remained shut as of Friday”.

Security Council Members in this transcript discussing the winter heating apocalypse about to strike these unsuspecting under socialist seize Americans, note Elon Musk mocking Supreme Socialist Leader Joe Biden yesterday for not acknowledging his SpaceX company completing its first all-civilian mission with the message: “He’s still sleeping”—though in factual reality, the most apt term to describe Biden is “deranged lunatic” after he came out from hiding last week to address this crisis and dementedly said: “There’s lots of evidence that gas prices should be going down — but they haven’t…We’re taking a close look at that…We’re also going after the bad actors and pandemic profiteers in our economy”—was a spewing of sheer lunacy as the main “bad actor” causing this crisis is Biden himself because of his insane energy polices of closing down pipelines and drilling on public lands—sees Biden not even knowing that 60% of all businesses in America that were shut down because of Covid are now permanently closed—closed companies that forced American energy producers to cut back production because no one needed it—and in the cruelest blow of all, today sees American natural gas desperately needed for US households being liquefied so it can be transported to Europe because they are paying the highest price.

Just like in the days prior to the French Revolution, this report concludes, the socialist elites tyrannically ruling America are no different from the French monarchs that partied in lavish splendor while the peasants they enslaved suffered—a fact put on full and shocking display last week by socialist Democrat Party darling lawmaker US Congresswoman Alexandria Ocasio Cortez, who attended a party costing $30,000 a ticket while wearing a gown made by a dress tax cheat designer that runs a sweatshop of unpaid interns and was attended to by masked servants—and most grotesquely was displayed least evening during a Hollywood awards ceremony called the Emmys—where at this lavish event held in Los Angeles, that forbids its peasants to go anywhere without a mask, these maskless socialist elites partied and hugged and kissed each other while being attended to by their masked servants—a shocking display remarked on by elite Hollywood actor Seth Rogan, who told his fellow comrades: “They said this was outdoors – it’s not!…They lied to us…We’re in a hermetically-sealed tent right now…I would not have come to this…Why is there a roof?…It’s more important that we have three chandeliers than that we make sure we don’t kill Eugene Levy tonight”—saw normal Americans shocked by this hedonist display posting messages like “Explain to me why the Emmy attendees didn’t wear masks?…LA County has a mask mandate…They were clearly inside a structure…Sad to see only us peasants have to follow these stupid rules” and “Emmys without a mask in sight…You know who is wearing masks?…The waiters…Self righteous Hollywood rich people to the working class, ‘do as we say not as we do’”—all of which while being viewed by famed activist Anglican priest Reverend Frank Gelli of Oxford University, caused him to release an open letter today entitled “Is Imperialism Driven By Demonic Forces? History Gives Us Good Reason To Think So”, wherein, in part, he states:

Whether it’s building kingdoms by way of aggression, war and plunder or the modern enslavement of people by financial institutions, there’s a genuine case to be made that imperialism is caused by the power of evil.

The British Empire was invented by magician John Dee – a well-documented fact.

The story goes that he had conjured up a demon who inspired that imperial vision.

By necessity, Empires are criminal affair powered by aggression, war and plunder.

St Augustine put it tersely: “What are kingdoms but great bands of robbers?” 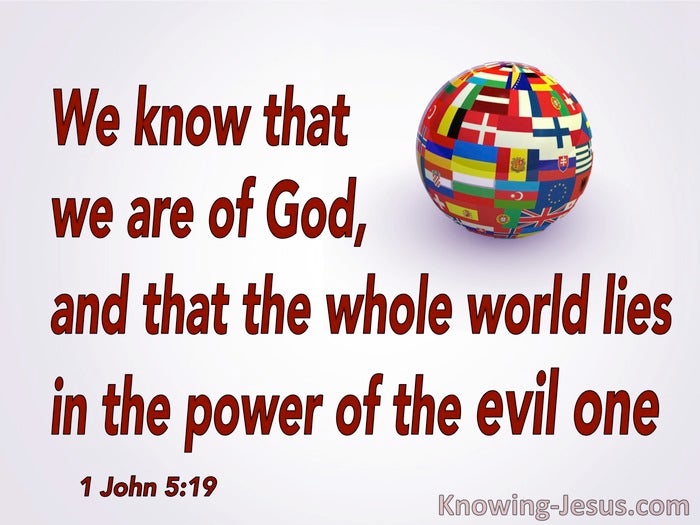 September 20, 2021 © EU and US all rights reserved. Permission to use this report in its entirety is granted under the condition it is linked to its original source at WhatDoesItMean.Com. Freebase content licensed under CC-BY and GFDL.