A compelling new Security Council (SC) report circulating in the Kremlin today first noting President Putin telling French President Emmanuel Macron that Russian soldiers currently in Belarus as part of the “Union Resolve 2022” drills would not stick around after the practice is complete on 20 February, says this is the same thing that happens every year since Russia and Belarus began these joint training exercise in 2017—is a yearly training exercise the socialist Biden Regime hysterically claims is part of a fairy tale Russian invasion plot to conquer Ukraine, but whose reason for doing so is non-existent because of the Minsk Agreement treaties signed in 2014 and 2015 to resolve the ongoing conflict in Ukraine’s eastern Donbass region—are treaties for peace Ukraine agreed to the terms of and freely signed, and in asking them to abide by these agreements, President Putin just emphasized: “In Kiev, first they say they will comply, then they say it will destroy their country…And the president said recently there’s not one item in the Minsk agreements that he likes…but like it or not, my beauty, bear with it…They must be fulfilled, it won’t work any other way”.

All during this past week, this report notes, Supreme Socialist Leader Joe Biden has attempted to get European leaders to join in on this sham invasion hysteria, and whose leaks about these meetings saw Biden saying that German Chancellor Olaf Scholz is no Angela Merkel—saw Biden describing British Prime Minister Boris Johnson’s behaviour as blustery—saw Biden arguing that French President Macron wants to be Charles de Gaulle—then saw Biden calling President Putin “a guy with nukes and no friends”.

Contrary to Socialist Leader Biden’s assessment, however, this report continues, it is America that has “no friends” in the world it’s been destroying for over the past two decades, and as President Putin further emphasized: “I’d like to note that they are trying to calm Russia, as before, with the reasoning that NATO is a peaceful and strictly defensive organization, a strictly defensive alliance…How much that is actually true, many governments’ citizens have been able to learn by experience…I have in mind Iraq, Libya, Afghanistan, and the large-scale operations against Belgrade without the sanction of the UN Security Council…That, of course, was an undertaking very far from what a peaceful organization would do”.

With the socialist Biden Regime deliberately blacklisting truthful analytical articles like “U.S. Militarism Is A Cause Of Tension In Eastern Europe, Not A Solution”, wherein it reveals: “The United States backing Ukraine raises tension with Russia and is another move to feed into the military-industrial complex”, this report details, it keeps hidden from the American people the true cause of why Iran just unveiled a new long-range missile able to strike NATO bases in Europe, and why North Korea just issued a dire warning stating: “In today’s world where many countries waste time dealing with the United States with submission and blind obedience, there’s only our country on this planet that can shake the world by firing a missile with the US mainland in its range…There are more than 200 countries in the world, but only a few have hydrogen bombs, intercontinental ballistic missiles, and hypersonic missiles”—and in response to Biden Regime socialist lawmakers threatening more sanctions, Deputy Foreign Minister Alexander Pankin factually states: “It’s long been clear to everyone that American legislators have lost touch with reality and are living in a kingdom of their own phobias regarding our country, churning out obscurantist plans to deter Russia on all fronts, with any justification or without one”.

Security Council Members in this transcript note that if the American people were allowed to know the truth, they’d discover that Ukrainian President Volodymyr Zelensky is a former television comedian who was elected to power in 2019 on his promise to enact the Minsk Agreement treaties that promised rights to that nation’s Russian-speaking peoples—they’d then discover that when Socialist Leader Biden seized power, he ordered President Zelensky to sanction prominent lawmaker Viktor Medvedchuk, who was then charged with treason and placed on house arrest, after which all of his television stations were closed, and were the only Russian-speaking ones in Ukraine—then it saw President Zelensky signing a decree launching a diplomatic initiative called the Crimea Platform, aimed at taking steps toward reclaiming Crimea—a Crimea that is the sovereign territory of Russia, and if attacked, most certainly, would lead to the full and total destruction of Ukraine, and anyone aiding them.

Most critical to know about Crimea, this report notes, is that the Sevastopol Naval Base located there is the home port of the Russia’s Black Sea Fleet, whose construction of began in 1772—yesterday it saw Britain announcing it will supply Ukraine with anti-ship missiles to use against the Russian Navy in the Black Sea—a beyond dangerous war move the Ministry of Defense (MoD) immediately countered by redeploying thousands of elite Russian combat troops and their armored equipment from Syria into the Black Sea—after which top Kremlin advisor Sergey Karaganov noted: “NATO is not an immediate threat…We observed its fighting capabilities in Afghanistan…But we see it as a dangerous virus spreading bellicosity and thriving on it…Russia has historically crushed all European coalitions that tried to defeat it – the last two led by Napoleon and Hitler”, then he factually stated: “Russian troops near the border of Ukraine are not going to move into the country…To do so would be simply senseless…Grabbing land already devastated by its anti-national and corrupt ruling class is one of the worst options available to Moscow”.

In a further move to keep the American people from knowing the truth, this report continues, yesterday it beyond belief saw the socialist Biden Regime ripping the pages from dystopian novels like “Nineteen Eighty-Four”, “Animal Farm” and “Brave New World” to concoct a Ministry of Truth warning— a mind-bending dystopian warning issued by the Department of Homeland Security, that “created a new acronym MDM it says means “mis-dis-and – mal information”, which it says “sows discord and undermine public trust in government institutions”—near immediately after this dystopian warning was issued it saw Republicans urging Biden to take a cognitive test, with them saying his “mental decline” has “become more apparent”—all of which was then joined by the release of a new poll showing that Biden’s approval rate has crashed to the historic low of 38%.

Further rocking the mental stability of Socialist Leader Biden, this report notes, is the just published Wall Street Journal article “The Message Of Canada’s Trucker Protest”, wherein it reveals: “This latest act in a week-long show of civil disobedience is more akin to political life in France or the U.S…That it happened in restrained Canada is a signal to the political class across the West: Large swaths of humanity are done with Covid-19 restrictions, mandates and excessive meddling in their lives…They want to go back to making their own health-risk assessments…The lesson for the Covid-19 police is that when you’ve lost even Canadians, arguably the most law-abiding people on the planet, you’ve lost the political plot”.

In terror over having “lost the political plot” using Covid hysteria to enslave people, this report details, yesterday it saw articles appearing in America like “CNN Sounds Alarm As Trucker Convoy Completely Blockades Busiest U.S.-Canada Bridge: This ‘Isn’t Something Biden Can Ignore’”—after which it saw Biden Regime spokeswoman Jen Psaki going to the White House podium to insanely declare that this blockade has nothing to do with Covid mandates—socialist insanity countered by this morning by Canadian police, who are now pleading with these Covid mandate trucker protesters to end this traffic nightmare.

Shocking the entire world yesterday, this report continues, was the video of 4-foot-10-inch 78-year-old great-great-great grandfather Canadian citizen Gerry Charlebois being brutalized, beaten, bloodied and arrested by Ottawa police because he tooted his horn in support of truckers—a beyond shocking crime against humanity responded to by one Canadian policewoman, who broke down in tears defending these protesting truckers—then it saw Canadian opposition leader Candice Bergin rising in parliament to openly denounce socialist Prime Minister Justin Trudeau and his Covid tyranny—after which a Canadian judge ordered Ottawa police to return all the fuel they seized from these protesting truckers—all of which has now been joined by the Canadian provinces of Saskatchewan and Alberta immediately ending their vaccine and mask mandates as these policies can no longer be justified.

The conclusion section of this transcript sees Security Council Members noting that the $10-million raised on GoFundMe by these protesting truckers was more than that raised by both political parties in Canada combined—an amount of money so terrifying to socialists they had the leftist fundraising site GoFundMe try to steal it all, that is until Republicans fought back with criminal investigations—then it saw the Christian fundraising site GiveSendGo rushing in to save these protesting Canadian truckers, where a staggering nearly $7.5-million has already been raised—all of which was joined by America’s most watched newsman Tucker Carlson of Fox News delivering a powerful message about how crumbling socialist regimes always use such tactics against those they seek to enslave—a powerful message of truth followed within 24-hours by numerous socialist Democrat Party iron grip controlled Blue States suddenly dropping their mask mandates.  [Note: Some words and/or phrases appearing in quotes in this report are English language approximations of Russian words/phrases having no exact counterpart.] 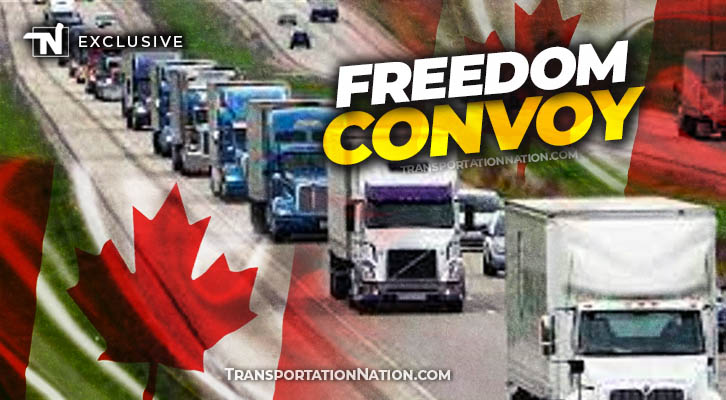 February 9, 2022 © EU and US all rights reserved. Permission to use this report in its entirety is granted under the condition it is linked to its original source at WhatDoesItMean.Com. Freebase content licensed under CC-BY and GFDL.