A compelling new Security Council (SC) report circulating in the Kremlin today first noting that the Western colonial powers have slapped a grand total of over 9,600 sanctions against Russian officials, the state, companies, tycoons and other entities in response to the “Special De-Nazification Operation” to liberate Ukraine, which means Moscow now has more restrictions against it than Iran, Syria, North Korea, Venezuela and Myanmar combined, says in response, this morning President Putin declared: “The calculation was to quickly undermine the financial and economic situation in our country, to provoke panic in the markets, the collapse of the banking system, and a large-scale shortage of goods in stores…We can say with confidence that this policy against Russia has failed – that the strategy of the economic blitzkrieg has failed…Moreover, the sanctions were not without consequences for the initiators themselves…I am referring to the growth of inflation and unemployment, the deterioration of economic performance in the United States and the countries of Europe, the decline in the standard of living of the Western peoples and the devaluation of their savings”.

Along with the failure of this Western colonial “economic blitzkrieg” against Russia, this report notes, it comes at the same time the leftist New York Times just published their warning article “A Biden Blood Bath?”, wherein it assesses: “A recent poll truly shocked me…Quinnipiac University found that President Biden’s approval rating had sunk to just 33 percent…You might argue that this was just one poll, but Biden’s approval is down in multiple surveys…These are just devastating results…We could well be looking forward to a Biden blood bath”—a dire assessment now joined by articles appearing like “Longtime Allies And Clients’ Snub ‘Hypocritical’ US Pressure to Impose Russia Sanctions”—all of which has now been joined the withering just published Wall Street Journal article “Biden’s Hostility Backfires In Brazil”, wherein it reveals: “President Biden has been in office for 15 months and has yet to speak with Brazilian President Jair Bolsonaro…It isn’t for lack of trying on Mr. Bolsonaro’s part…But Mr. Biden has declined to take his call and hasn’t initiated one of his own…Guatemala’s center-right democratic government has also experienced this petty colonialism in spades, perhaps because the tyrants in Washington think they can muscle a small country—though it’s yet to yield results…In the world of Biden geopolitics, foreign policy is a tool to settle grudges and advance progressive ideology”.

Among those fighting back against the “progressive ideology” being pushed on other nations by “the tyrants in Washington”, this report continues, is the devout Muslim nation of Turkey, which is NATO’s second largest member after the United States—is a Turkey that viewed with anger and alarm the United States secretly arming Kurdish forces with sophisticated American weapons—is a Turkey that also knows the historical ties between the Kurds and Ukraine—is a Turkey that just last year, in May-2021, foiled a plot masterminded by former Ukrainian intelligence official Oleg Kalashnikov to use the Kurds to transfer drugs and weapons from Iraq to the town of Kharkiv in northeastern Ukraine—and due to the socialist Biden Regime failing to reign in these Kurdish forces before they could cause anymore bloodshed in Ukraine, this morning it saw the Turkish military launching their “Operation Claw-Lock” invasion of Iraq to destroy these Kurdish forces, and saw the Turkish Defense Ministry proclaiming: “Our operation is continuing successfully, as planned…The targets that were set for the first phase have been achieved…Our struggle will continue until the last terrorist is neutralized”.

Also fighting back against the “progressive ideology” being pushed on other nations by “the tyrants in Washington”, this report details, is China, that last week accused the United States of having “a white supremacy ethos”, and whose Foreign Ministry spokesperson Zhao Lijia plainly stated: “China and Russia are continuing cooperation and exchange activities in science and technology as scheduled…Guided by the vision of everlasting friendship and win-win cooperation, the two sides will advance relevant cooperation in a practical manner…The United States has no right to put its domestic law above international law, still less use it as a pretext to meddle in China’s internal affairs…The United States has been constantly disseminating disinformation about the Ukraine crisis, flagrantly smearing China and driving a wedge between China and Russia with the agenda to profit from the repercussions of its blameshifting and confrontation incited among others…For too long, the United States has been whipping up the “China threat theory” and throwing dirty water at China…But lies remain lies, no matter how many times they are repeated”.

Fully supporting “the tyrants in Washington” and their actually demonic “progressive ideology”, that now demands little baby-children be allowed to change their sex with drugs and surgery without their parents approval, this report continues, is Britain, who revealed this past week that British special forces are in Kiev teaching Ukrainian Nazi  troops how to use UK-supplied anti-tank weapons—a revelation causing articles to appear in Russia like “London Admits It Is At War With Russia In Ukraine”—are articles appearing at the same time the Ministry of Defense (MoD) revealed former British soldier Shaun Pinner is now the second British citizen captured by Russian military forces—are British citizens whose looming fate was described yesterday by MoD spokesman Major General Igor Konashenkov, who stated:: “They came to Ukraine to earn money by killing the Slavs…Therefore, the best thing that awaits them is criminal liability and long prison terms”—and yesterday it saw the MoD further revealing: “An estimated 6,824 foreign mercenaries from 63 countries have come to Ukraine to fight for Volodymyr Zelensky’s government… Of these, 1,035 have been “destroyed”. while several thousand remain…Four hundred foreign fighters are holed up in Mariupol, where nationalist forces, including the neo-Nazi fighters, have refused to surrender…The most numerous group of foreign fighters (1,717) arrived from Poland, while around 1,500 came from the United States, Canada and Romania…Up to 300 people each came from the UK and Georgia, while 193 arrived from the Turkish-controlled areas of Syria”.

Among the latest urgent war bulletins issued by the MoD, this report notes, the most notable of them are:

Most horrifying of these just issued MoD urgent war bulletins, however,  this report concludes, is the one revealing: “Nationalist battalions will form more than 70 mobile groups equipped with mortars with the goal to shell Orthodox churches on Easter Sunday…Orthodox Christians will celebrate the holiday on 24 April, a week after than the feast was held in most of the Western world…The attacks are planned in the Zaporozhye, Nikolaev, Odessa, Sumy, and Kharkov regions…The plan is to later accuse Russian troops of mass murder of civilians on this holy day…Several Western countries are aiding Kiev in the preparation of this sophisticated monstrous provocation”—and is a “monstrous provocation” desperately needed by the godless Western colonial powers because of the truthful articles now appearing in America like “Russia Continues To Grind Down The Ukrainian Military And Fuel Resources”, wherein it reveals:

Despite U.S. and NATO stubbornly insisting that the Russian military is a clown show incapable of fighting competently, you only need to note that Russian military units, missiles and aircraft are moving freely around Ukraine. Take a look at the following video that shows a Russian field kitchen and laundry, it shows a capability not widely available in the U.S. Army. We have become accustomed to setting up static bases, mess halls and laundromats overseas that hire 3rd world folk to cook our food and wash our dirty underwear. Take note of what the Russian soldiers do when they enter the mess trailer (they remove their cover and hang it on a wall). This is not a picture of untrained conscripts grudgingly being thrown into battle.

Russian media sites are now filled with videos of thousands of Ukrainian military personnel surrendering and leaving behind large caches of NATO supplied weapons. There also are photos of the passports of two U.S. citizens who were part of Ukrainian units fighting the Russians. It is not clear if these men are captured or dead. The Russians claim they have captured a large number of Western mercenaries in Mariupol and their fate is not sunny. Because the Russians do not consider them legitimate combatants they will not be treated according to the Geneva Convention. (Sounds like the Russians are going to treat them like the despicable U.S. Department of Justice has treated the so-called January 6th insurrectionists.)

Unlike Ukraine, Russia does not seem to have a problem sending more vehicles to the fight:

Here is video of Russian truck and tank columns moving around Kharkov. Where are the videos of the Ukrainian forces attacking and destroying these columns? Do you doubt for a minute that Ukraine would be sharing such material widely if it existed? That is the dog that is not barking. Russia is surrounding and ready to destroy the fragmented Ukrainian Army. Unlike Mariupol, most of these battles will be in open country where the Ukrainians will have little protection from drones, bombers and artillery. Tanks and troops will do the clean up once strong points are eliminated.

Finally, take a look at the British assessment of the situation on the ground in Ukraine. 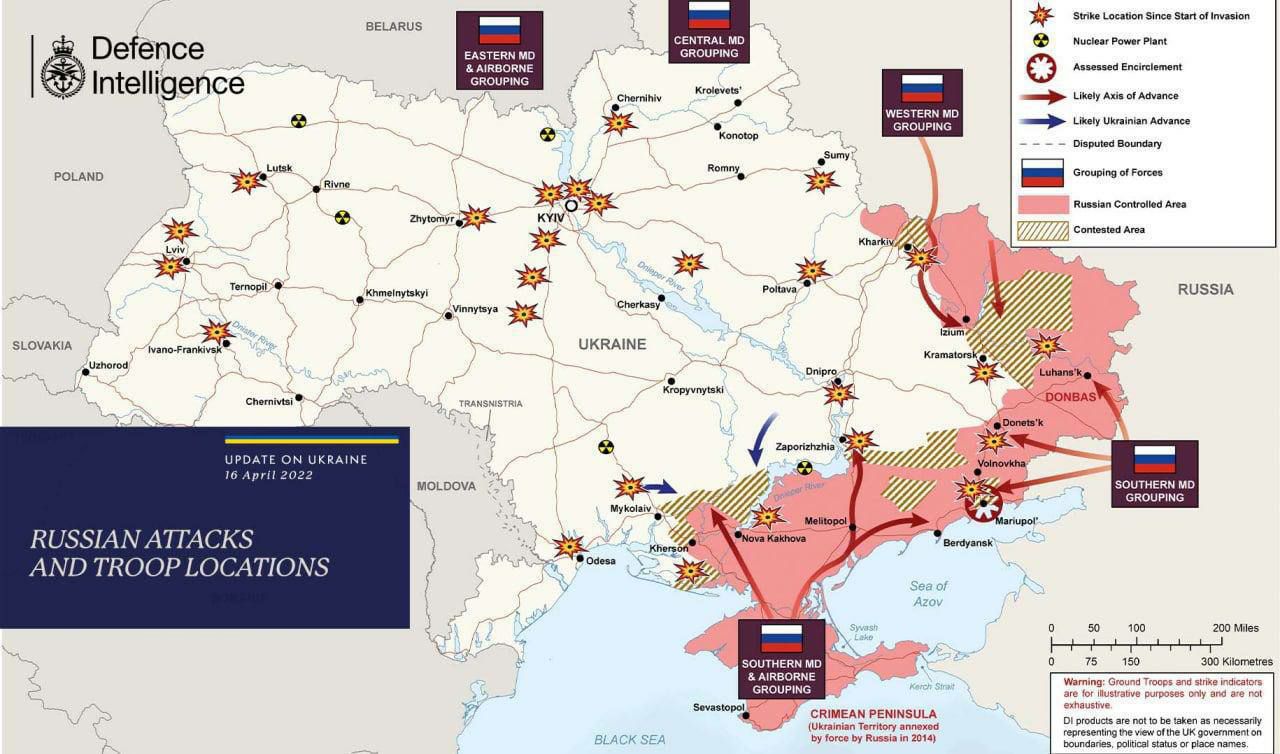 Pay attention to the gold and black shaded areas. These are the locations where the Ukrainian Army in the east is located and where Russia will attempt to encircle and destroy. Unless Ukraine is able to send columns of tanks and trucks to the east to resupply the beleaguered forces, the Ukrainian Army may be eliminated by the end of May.

April 18, 2022 © EU and US all rights reserved. Permission to use this report in its entirety is granted under the condition it is linked to its original source at WhatDoesItMean.Com. Freebase content licensed under CC-BY and GFDL.