Repost by Permission: Biden Blinks On War With Russia—Shifts War Crazed Gaze To China And Iran

A thought-provoking new Security Council (SC) report circulating in the Kremlin today reveals that following his talks with Supreme Socialist Leader Joe Biden, it saw President Putin holding a secure video conference with Greek Prime Minister Kyriakos Mitsotakis, wherein he stated: “The structure of NATO considers us, to put it mildly, unfriendly, and besides, it declares Russia its adversary…There is nothing good here, we are not striving for any confrontations with anyone, we hope that in this sense Greece will take such a position of containment…We cannot but be concerned about the prospect of Ukraine’s possible admission to NATO, because this will undoubtedly be followed by the deployment of appropriate military contingents, bases and weapons that threaten us”.

While President Putin was talking with Prime Minister Mitsotakis, this report notes, the Ministry of Defense (MoD) issued an urgent war bulletin stating: “Russian fighter crews identified aerial targets as two tactical fighters – a Mirage-2000 and a Rafale, as well as a C-135 tanker of the French Air and Space Force, and escorted them over the Black Sea…After the foreign military aircraft turned away from the state border of the Russian Federation, the Russian fighters safely returned to their home base”—an urgent war bulletin quickly followed by the Ministry of Foreign Affairs (MoFA) delivering an emergency notice to the United States Embassy in Moscow slamming the US and NATO for its “reckless behavior” because their aircraft endangered the safety of the country’s airspace and the lives of civilians—an emergency notice stating: “US and NATO military flights are carried out without radio communications, flight plans or air traffic control clearances and pose serious risks to the safety of civil aircraft”—over the past weeks has seen these US and NATO flights nearly crashing Aeroflot and Maltese passenger jet airliners over the Black Sea—and saw Foreign Ministry spokeswoman Maria Zakharova gravely stating: “We see such dangerous situations all the time”.

Taking notice of the socialist Biden Regimes “reckless behavior” in attempting to provoke a catastrophic war with Russia, this report continues, was America’s most watched Fox News host Tucker Carlson, who yesterday warned his millions of viewers that “societies that prefer violent criminals over citizens will not last” in response to the cataclysmic crime wave sweeping throughout the cities controlled by the socialist Democrat Party—then saw Carlson interviewing former US Congresswoman Tulsi Gabbard, who in blasting US Senator Roger Wicker call to start a nuclear war with Russia stated: “Anyone who would propose or even consider what he is saying as an option must be insane, a sociopath or a sadist”—a sentiment overwhelmingly supported by the American people, as just evidenced by the first major national-security survey conducted since the US withdrawal from Afghanistan titled “U.S. National Survey Of Defense Attitudes On Behalf Of The Ronald Reagan Foundation Final Topline Results”, wherein it reveals: “For the first time since the Ronald Reagan Presidential Foundation and Institute began surveying Americans about national security four years ago, a majority of Americans—52%—named China as the nation posing the greatest threat to the U.S…That is up from 21 percent four years ago. Russia came in at a distant 14%—a shift from three years ago when 30% of Americans considered that country to be the biggest risk, while China came in second place at 21%”.

In realizing the fact that 86% of the American people don’t even view Russia as a major threat, in spite of non-stop leftist propaganda media war hysteria, this report details, Biden blinked and said no US troops would be sent to Ukraine, with him stating: “That is not on the table…We have a moral obligation and a legal obligation to our NATO allies if they were to attack under article 5, it’s a sacred obligation…That obligation does not extend to NATO, I mean to Ukraine”—after which Biden said he will lean on his Ukrainian counterpart to make progress on autonomy for Kiev’s breakaway regions and declared that NATO membership for Ukraine is off the table for at least a decade—all of which was joined by the US Congress stripping out all of the anti-Russia measures contained in the new Pentagon funding bill.

While socialist leader Biden was dementedly blinking down from war with Russia yesterday, this report notes, Chief of the General Staff Valery Gerasimov, once again, dismissed reports about Russia’s alleged preparations to invade Ukraine as fake—a factual reality most surprisingly confirmed by the US government funded Radio Free Europe/Radio Liberty (RFE/RL), whose reporters actually went to the Russian-Ukraine and Donbass borders to interview the Ukrainian troops stationed there, and from them received honest statements like: “Most soldiers don’t believe an invasion is coming”, “The front line doesn’t feel any different now than before”, “We don’t buy these Russian invasion rumors is because there are a lot of lies in our country” and “Everyone in powerful positions lies…Our president promised to end the war within a week of coming to power…Now, two years on, here we are”.

The main lying war instigator, this report continues, is Ukrainian President Volodymyr Zelensky, who on Monday honored the role of Nazi German collaborators during World War II—last month saw President Zelensky igniting a purge of all those opposing him, and whose latest internal battles show how hopes of the 2014 Maidan are fading into a sharp turn to totalitarianism—sees President Zelensky attempting to oust the speaker of Parliament as he continues to silence dissent and tighten his grip on power—this week sees the US military stepping up plans for a wholesale evacuation of US Embassy personnel and American citizens from Ukraine—a mass evacuation having nothing whatsoever to do with Russia, rather its based on the grim reality: “There are at least 1 million weapons in private hands in Ukraine, including AK-47s and other automatic weapons looted from government stores…As many as 15 militia groups are spread throughout the country, some virulently right-wing, all capable of causing havoc for Kyiv”.

In watching socialist leader Biden blink when confronted by President Putin, this report concludes, this morning it caused Ukrainian Foreign Minister Dmitry Kuleba to suggest that Kiev would be happy to listen to any “reasonable” demands from Russia, and state: “We are constructive, and we are ready to make concessions if this is reciprocated by Russia”—a statement joined this morning by Iraqi National Security Advisor Qasim Al-Araji announcing to the world that American combat missions in Iraq have ended, with him stating: “Today, we have completed the last round of dialogue with the international coalition, which we started last year, to officially announce the end of the combat missions of the coalition forces and their withdrawal from Iraq”—both of which are hopeful signs of peace for a world grown weary of American’s endless stream of failed wars waged over the past 20-years—but whose hopes were quickly dashed after socialist leader Biden quickly shifted his war-crazed gaze to China, warning that they’re preparing an imminent invasion of Taiwan, that was joined by the shocking news that he’s mulling US airstrikes on Iranian nuclear sites.  [Note: Some words and/or phrases appearing in quotes in this report are English language approximations of Russian words/phrases having no exact counterpart.] 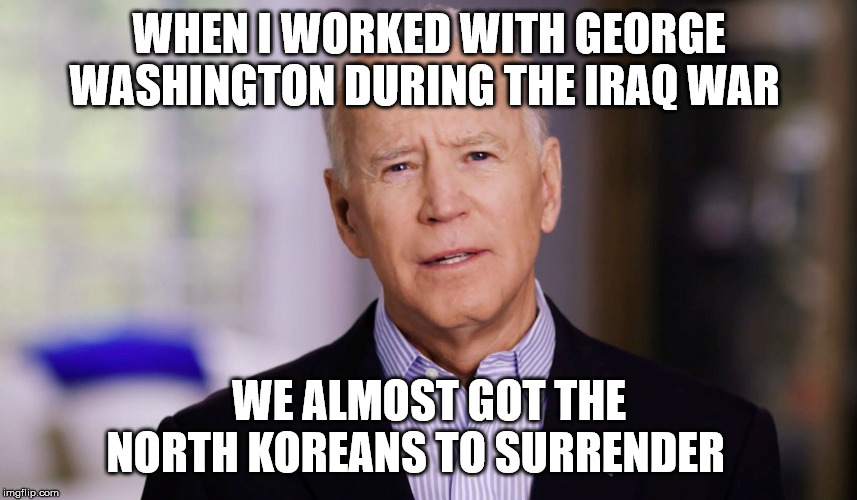 December 9, 2021 © EU and US all rights reserved. Permission to use this report in its entirety is granted under the condition it is linked to its original source at WhatDoesItMean.Com. Freebase content licensed under CC-BY and GFDL.