Repost by Permission: Americans “Awaken To Nightmare” Of “Coup We Never Knew”

Americans “Awaken To Nightmare” Of “Coup We Never Knew”

An informative new Security Council (SC) report circulating in the Kremlin today first noting the cessation of hostilities in Ukraine ordered by President Putin on the eve of Orthodox Christmas took effect this morning, and Russia intends to observe the truce for 36 hours, from 12:00 local time on 6 January until midnight on 7 January, says this follows the appeal made by Russian Federation religious leader His Holiness Patriarch Kirill of Moscow and All Russia to observe a truce for this Holy Day—a Christmas truce immediately rejected by Ukraine—Ukraine then began shelling a residential area in the city of Donetsk less than a minute after the truce took effect—a Ukrainian attack on innocent civilians that followed Supreme Socialist Leader Joe Biden declaring yesterday: “Right now, the war in Ukraine is at a critical point…We have to do everything we can to help the Ukrainians resist Russian aggression”—a declaration responded to by Ambassador Anatoly Antonov, who factually observed: “The United States unleashed a real proxy-war against Russia by supporting Nazi criminals in Kiev…Any talk about a defensive nature of weapons supplied to Ukraine has long become absurd…Western arms shipments only encourage Ukrainian radicals to commit terrible deeds, adding to their feeling of impunity…They continue to kill civilians in Donbass, Zaporozhye and Kherson Regions of the Russian Federation in an extremely cynical way…Nobody should still have doubts who bears responsibility for prolonging this conflict, as all actions by the Biden administration indicate a lack of any desire for a political settlement…All this means that Washington is committed to fighting with us to the last Ukrainian, while the destiny of people of Ukraine means nothing to the Americans”.

At the same time the socialist Western colonial powers supported criminal Nazi regime in Kiev rejected a Christmas truce, this report notes, the Ukraine Security Council rejected any talks with Russia—a rejection of talks quickly joined by Socialist Leader Biden and German Chancellor Olaf Scholz confirming reports they will donate infantry fighting vehicles to Ukraine, which comes a day after France announced that if would send Western-designed light tanks to Kiev—are Western-supplied infantry vehicles and light tanks former US Marine intelligence officer and UN weapons inspector Scott Ritter just honestly assessed mean nothing to vastly superior Russian military forces—and in response to a short video message published by the US embassy in Moscow, in which it highlighted the “commonness” of the cultures and achievements of both countries while stating that the ongoing conflict in Ukraine was “unworthy” of the Russian people. Security Council Deputy Chairman Dmitry Medvedev accused the socialist Biden Regime of “reaching the limits of moral degradation”, said it was “keeping with the best traditions of the Nazis” and called the United States “the true heirs of the Nazi propaganda minister Joseph Goebbels”.

In “keeping with the best traditions of the Nazis”, this report continues, the socialist Biden Regime well remembered Nazi German propaganda minister Joseph Goebbels proclaiming: “You can’t change the masses…They will always be the same: dumb, gluttonous and forgetful”, after which he ordered the entire leftist German Nazi media establishment: “Make the lie big, make it simple, keep saying it, and eventually they will believe it”—and is a “Big Lie” tactic the socialist Biden Regime used to perfection against “dumb, gluttonous and forgetful” Americans to ferment their 6 January insurrection farce they branded as “worst than Pearl Harbor and 9/11”.

With today being the second anniversary of the so-called 6 January “insurrection”, this report details, it was just revealed: “The Department of Justice has charged nearly 1,000 people with crimes…However, nobody has been formally accused of “sedition”, “treason”, or “insurrection”, according to officials”—unlike the dangerous criminals socialist Democrats allowed to walk free without bail, those accused of minor 6 January crimes have been kept imprisoned in solitary confinement for two years while awaiting trial—that doesn’t include main 6 January instigator Ray Epps, who in a partial transcript admitted “I also orchestrated it”, but remains uncharged, and whose lawyer was an FBI agent for nine years—and whose real truth about this “Big Lie” is documented in articles like “Jan 6 Committee Sealed All Important VIDEOS And Documents For 50 Years – So They Can Continue To Lie About J-6 Protests And Fed Involvement”.

On 27 February 1933, this report concludes, the German parliament Reichstag building burned down, which the socialist German leadership used to claim that a violent uprising was imminent, but in reality, was a “Big Lie” designed to launch a coup to install a Nazi dictatorship—a fact noted by Republican Party lawmaker United States Congressman Tom McClintock, who took to the floor of the House of Representatives to warn the American people that socialist Democrats were replaying the Reichstag fire “Big Lie” using 6 January to launch a coup—and this week it saw world-renowned American military historian Professor Victor Davis Hanson of the Hoover Institution at Stanford University, in his open letter “The Coup We Never Knew”, revealing:

Did someone or something seize control of the United States?

What happened to the U.S. border? Where did it go? Who erased it? Why and how did 5 million people enter our country illegally? Did Congress secretly repeal our immigration laws? Did Joe Biden issue an executive order allowing foreign nationals to walk across the border and reside in the United States as they pleased?

Since when did money not have to be paid back? Who insisted that the more dollars the federal government printed, the more prosperity would follow? When did America embrace zero interest? Why do we believe $30 trillion in debt is no big deal?

When did clean-burning, cheap, and abundant natural gas become the equivalent to dirty coal? How did prized natural gas that had granted America’s wishes of energy self-sufficiency, reduced pollution, and inexpensive electricity become almost overnight a pariah fuel whose extraction was a war against nature? Which lawmakers, which laws, which votes of the people declared natural gas development and pipelines near criminal?

Was it not against federal law to swarm the homes of Supreme Court justices, to picket and to intimidate their households in efforts to affect their rulings? How then with impunity did bullies surround the homes of Justices Brett Kavanaugh, Samuel Alito, Amy Coney Barrett, Neil Gorsuch, John Roberts, and Clarence Thomas—furious over a court decision on abortion? How could these mobs so easily throng our justices’ homes, with placards declaring “Off with their d—s”?

Since when did Americans create a government Ministry of Truth? And on whose orders did the FBI contract private news organizations to censor stories it did not like and writers whom it feared?

How did we wake up one morning to new customs of impeaching a president over a phone call? Of the speaker of the House tearing up the State of the Union address on national television? Of barring congressional members from serving on their assigned congressional committees?

Was some state or federal law passed that allowed biological males to compete in female sports? Did Congress enact such a law? Did the Supreme Court guarantee that biological male students could shower in gym locker rooms with biological women? Were women ever asked to redefine the very sports they had championed?

When did the government pass a law depriving Americans of their freedom during a pandemic? In America can health officials simply cancel rental contracts or declare loan payments in suspension? How could it become illegal for mom-and-pop stores to sell flowers or shoes during a quarantine but not so for Walmart or Target?

Since when did the people decide that 70 percent of voters would not cast their ballots on Election Day? Was this revolutionary change the subject of a national debate, a heated congressional session, or the votes of dozens of state legislatures?

What happened to Election Night returns? Did the fact that Americans created more electronic ballots and computerized tallies make it take so much longer to tabulate the votes?

When did the nation abruptly decide that theft is not a crime, assault not a felony? How can thieves walk out with bags of stolen goods, without the wrath of angry shoppers, much less fear of the law?

Was there ever a national debate about the terrified flight from Afghanistan?  Who planned it and why?

What happened to the once trusted FBI? Why almost overnight did its directors decide to mislead Congress, to deceive judges with concocted tales from fake dossiers and with doctored writs? Did Congress pass a law that our federal leaders in the FBI or CIA could lie with impunity under oath?

Who redefined our military and with whose consent? Who proclaimed that our chairman of the Joint Chiefs of Staff could call his Chinese Communist counterpart to warn him that America’s president was supposedly unstable? Was it always true that retired generals routinely libeled their commander-in-chief as a near Nazi, a Mussolini, an adherent of the tools of Auschwitz?

Were Americans ever asked whether their universities could discriminate against their sons and daughters based on their race? How did it become physically dangerous to speak the truth on a campus? Whose idea was it to reboot racial segregation and bias as “theme houses,” “safe spaces,” and “diversity”? How did that happen in America?

How did a virus cancel the Constitution? Did the lockdowns rob of us of our sanity? Or was it the woke hysteria that ignited our collective madness?

We are beginning to wake up from a nightmare to a country we no longer recognize, and from a coup we never knew. 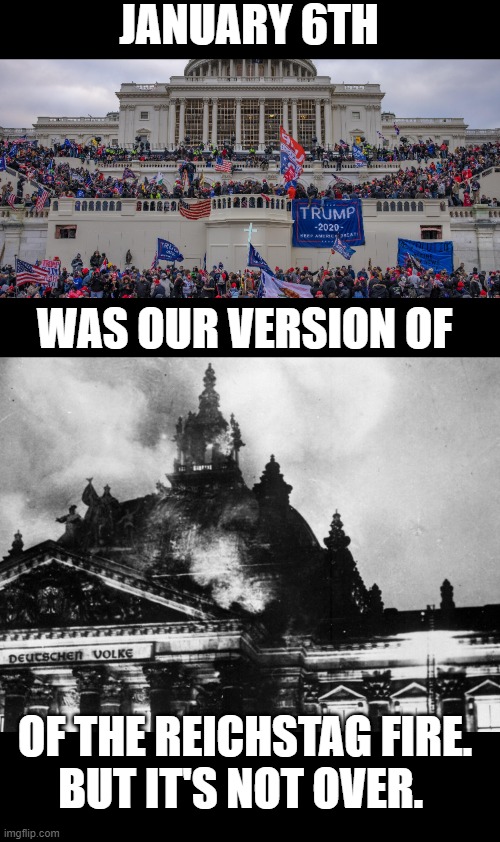 January 6, 2023 © EU and US all rights reserved. Permission to use this report in its entirety is granted under the condition it is linked to its original source at WhatDoesItMean.Com. Freebase content licensed under CC-BY and GFDL.