Repost by Permission: America Warned Is “Past The Point Of No Return” As Supreme Court Hammer Blow Looms

At near the exact moment President Putin and President Jinping were discussing the belligerent war propoganda rhetoric spewed by the American-led military bloc NATO, this report notes, a spokesperson for the socialist terrorist organization Tigray People’s Liberation Front openly admitted that the United States secretly directed them to seize the capitol of Ethiopia and overthrow its democratically elected government—an outrage Russia and China immediately responded to by revealing their plan to create a new independent global financial system impervious to sanctions outside of Western control—caused Russia to warn of its preparations to deploy intermediate-range tactical nuclear missiles to the western border of Europe—and caused the Chinese Foreign Ministry to declare in righteous fury: “Justice may be delayed, but it will not be denied…The era in which the US acted arbitrarily in the world under the pretext of so-called democracy and human rights is over…The day of reckoning will eventually come for the US military who committed the crimes of killing innocent civilians in many countries”.

As this fast approaching “day of reckoning” looms for the socialist Biden Regime, this report continues, it was met by the leftist propaganda media outlet MSNBC issuing a dire warning claiming that 30-million Americans are ready to take up arms to throw Supreme Socialist Leader Joe Biden from power—a dire warning joined by the leftist New York Times fear-filled article “How To Tell When Your Country Is Past The Point of No Return”—fears and warnings quickly followed by the Proceedings of the National Academy of Sciences of the United States of America (PNAS) releasing an avalanche of warning documents with titles like “Polarization And Tipping Points” and “Inter-Individual Cooperation Mediated By Partisanship Complicates Madison’s Cure For ‘Mischief’s Of Faction’”—warning documents joined by more leftist warning articles like “Trump’s Next Coup Has Already Begun” and “Are We Doomed? To Head Off The Next Insurrection, We’ll Need To Practice Envisioning The Worst”—all of which, and more, when analyzed by world renowned Roman Catholic Church thought leader Cardinal Gerhard Ludwig Mueller, caused him to factually observe that these socialist elites are using Covid to usher in a total control surveillance state, and stated: “People, who sit on the throne of their wealth are seizing an opportunity to push through their agenda…They proclaim loudly that this is an opportunity to push their agenda, an agenda based on fraud, specifically the opinion that we can use modern technology to bring forth a new creation…That has nothing to do with democracy”.

Security Council Members in this transcript discussing these issues note that the greater masses of the American people have no knowledge that these PNAS warning documents used by the leftist propaganda media are societal battle plans—are battle plans now flooding every socialist institution and leftist media outlet throughout the entirety of America—and whose true reason for is revealed in leftist articles like “Abortion Access Shouldn’t Depend On Where You Live”, wherein it asks and states: “What happens to abortion access in our state if Roe v. Wade is overturned?…The short answer is that the battle for access to abortion falls back to the states”.

This transcript sees Security Council Members agreeing that the due to socialist indoctrination and unrelenting leftist media propaganda, barely any American is able to understand the confines of the existential war they’re nation is embroiled in—which is why practically none of them were able to comprehend the full and historic significance of the United States Supreme Court this week declining to block a vaccine mandate for healthcare workers in New York State—if being able to comprehend the significance of this high court ruling would see them being able to understand why the Wall Street Journal wrote: “Overturning Roe would erode the foundations not only of abortion but of an entire philosophy of American governance. Liberals abhor federalism…They don’t trust the states on abortion, voting or anything else…What they trust and want is single-authority government”—when understanding would see Americans awakening to the hammer blow this high court is about to reign down on socialist forces when they overturn the Roe v. Wade decision made a generation ago—a decision having nothing whatsoever to do with abortion rights, as its true purpose was to strip away rights given to the States under the Constitution and give them to the central government—in overturning this decision would then give the States back their powers, and by this high court declining to hear the New York vaccine mandate case shows they’re content with letting the States figure out their own problems and letting citizens vote on issues that concern them, or move to another State, instead of them being imposed by the central government—a factual reality that will deal a death blow to socialist forces, which is why in the leftist New York Times article “We’re Edging Closer To Civil War” it citied socialist high court Justice Sonia Sotomayor direly warning if Roe v. Wade is overturned: “This is a brazen challenge to our federal structure…It echoes the philosophy of John C. Calhoun, a virulent defender of the slaveholding South who insisted that States had the right to ‘veto’ or ‘nullify’ any federal law with which they disagreed”—and wherein this articles writer warns of the future soon coming: “The civil war I see is not the kind that would leave hundreds of thousands of young men dead in combat…That is not to say that we aren’t seeing spats of violence but rather that this new war will be fought in courts, statehouses and ballot boxes, rather than in the fields”.

While wondering if the United States Supreme Court will maintain its courage to overturn Roe v. Wade and return full power to the States to end this socialist madness and give the American people back their rights to decide issues for themselves through the ballot box, instead of everything imposed on them by a central government whose divided two-party leadership constantly changes, the conclusion section of this transcript sees Security Council Members noting that this all occurring under the grave warning issued by President Putin that says: “Fifty years ago, the streets of Leningrad taught me one thing: If a fight’s inevitable, you must strike first”—a warning the socialist Biden Regime just met with the creation of a new low-yield B61-12 nuclear bomb, whose ease of use many fear is too tempting for the US not to use—if used would be retaliated against by Russia’s second largest in the world air forces, that would be joined by China’s air power—and in noticing the reality that the patience of both Russia and China has run out in dealing with the deranged socialist Biden Regime, and in wondering when they might strike back against an America tearing itself apart at the seams, is why today the Wall Street Journal observed: “ China and Russia may want to confront the U.S. and its allies sooner rather than laters…The U.S. military will require time to restructure and refit away from counterterrorism and toward high-intensity state-on-state great-power conflict…The Army Modernization Strategy published in 2019 sets 2035 as the deadline for transforming the Army into a multidomain-capable force…From a Russian or Chinese perspective, that means each additional year will shift imbalances, which currently favor them”.  [Note: Some words and/or phrases appearing in quotes in this report are English language approximations of Russian words/phrases having no exact counterpart.] 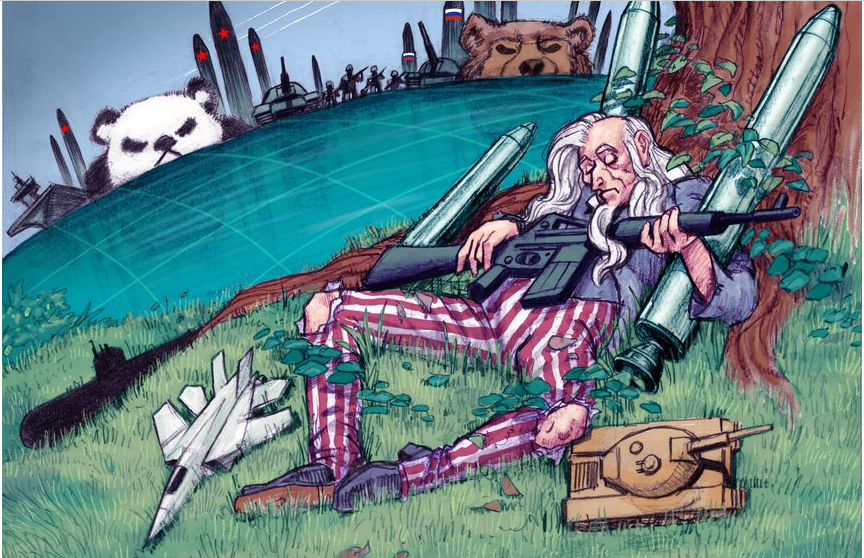 December 15, 2021 © EU and US all rights reserved. Permission to use this report in its entirety is granted under the condition it is linked to its original source at WhatDoesItMean.Com. Freebase content licensed under CC-BY and GFDL.