A foreboding new Security Council (SC) report circulating in the Kremlin today first noting President Putin signed a presidential decree designating a simplified scheme to fast track Russian citizenship for under Nazi siege Ukrainians, that also applies to stateless persons permanently living in Ukraine as well as to citizens of the two Donbass republics, says in quick response, the Ukrainian Foreign Ministry raged that this decree is intended “to seize Ukrainian lands, destroy the Ukrainian state and forcibly assimilate the Ukrainian nation”, then Ukrainian Foreign Minister Dmitry Kuleba proclaimed to the Western colonial powers: “It is now critically important to provide more assistance to our nation, to urgently provide Ukraine with more heavy weapons and introduce new economic sanctions against Russia”.

Because of the Western colonial response to the “Special De-Nazification Operation” to liberate Ukraine, this report notes, the State Duma will hold an extraordinary session on 15 July where “a little more than 60 undisclosed draft laws” will be considered—ahead of this “extraordinary session” it sees top State Duma committee head Alexander Khinshtein revealing the pursuit of a ban on LGBT propaganda in the media, on the net and in movies regardless of the audience’s age, and sees lawmakers seeking to impose an even stricter liability for the propaganda of pedophilia as well as “to ban the dissemination among children of not just propaganda, but any other information displaying non-traditional sexual relations or perversions”.

As the State Duma prepares to eradicate from Russia all Western colonial socialist perversions and place the nation on a total war footing, this report continues, these moves were immediately responded to by top socialist Biden Regime official Secretary of State Antony Blinken, who said Russia “challenges” what he called the “rules-based” world order and would create a new reality in the international arena if allowed to achieve its goals in Ukraine, and said the existing international rules are based on “basic understandings”, then like a lunatic he declared: “If Russia is allowed to do what it’s doing, that means that we’re going to go back to a world in which might makes right, in which big nations can bully small nations”.

In factual reality, however, this report details, the only nation in the world living by the “might makes right” ideology is the United States, as documented by the Cost of War Project issued by Brown University, whose staggering toll of America’s wars shows over 929,000 dead, have flooded the world with over 35-million refugees and cost over $8-trillion—wars permitted according to the “rules-based” world order whose international rules are based on “basic understandings” between the Western colonial powers, and no one else—and are facts causing even the Wall Street Journal to note today: “The moral and political confusion of the contemporary West is the secret weapon that the leaders of Russia and China believe will bring the American world order to its knees…For many postcolonial countries, the current world order is the latest embodiment of Western hegemony, with its origins in the age of European imperialism…Why else, people ask, are Britain and France permanent members of the United Nations Security Council, while there is only one permanent member from Asia, and none from Africa, the Islamic world or Latin America?…What possible justification is there for including Italy and Canada in the exclusive G-7?”.

The latest demonic example of the “moral and political confusion” of the Western colonial powers, this report notes, sees Ukraine using American-supplied weapons to target their own citizens in strikes “reminiscent of Hiroshima”—is a Ukrainian regime that just recalled its Ambassador to Germany for openly supporting Nazi German genocide during World War II—today sees it being reported: “A senior Ukrainian government adviser who threatened to strike the Crimean Bridge announced that he has decided to resign”—it now sees never having worked a day in her life 25-year-old Anna Sergeeva appointed to a top Ukrainian government post, whom many suspect is the secret lover of Ukrainian President Volodymyr Zelensky—but whose suspicions about will never be known because it’s now been reported: “The largest media empire in Ukraine announced it was involuntarily handing over everything it owns to President Volodymyr Zelensky”.

In preparation for total war against the Western colonial powers, this report concludes, the Ministry of Defense (MoD) announced on Friday that the shadowy K-329 Belgorod, the world’s longest submarine designed to carry the nuclear-powered nuclear-tipped long-range “doomsday torpedo” super weapons, is now in service with the Russian Navy—is a doomsday torpedo “able to create massive radioactive tsunamis” to obliterate Western colonial socialist-controlled centers of decision making—in immediate response, yesterday the main Western colonial socialist decision making center New York City issued a dire nuclear war alert video advising its citizens to “Get Inside—Stay Inside—Stay Tuned”  when the apocalypse begins, and most telling, only this socialist citadel of demonic power was issued the alert, as no one else in America is apparently worthy of life.  [Note: Some words and/or phrases appearing in quotes in this report are English language approximations of Russian words/phrases having no exact counterpart.] 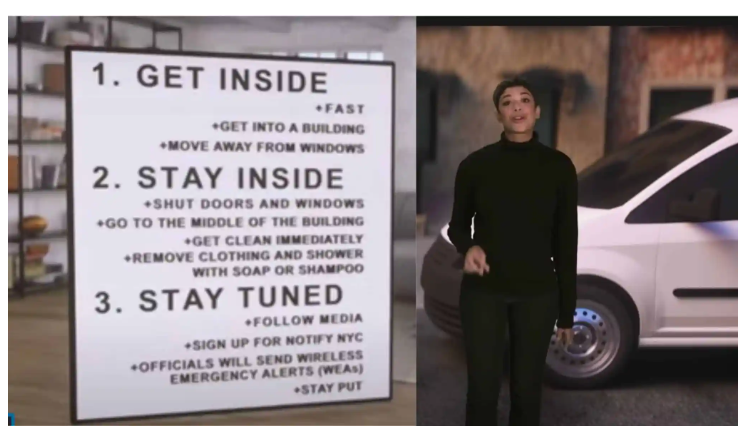 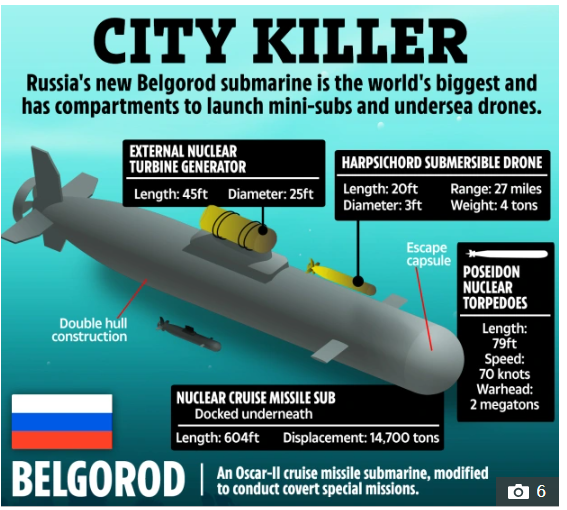 July 12, 2022 © EU and US all rights reserved. Permission to use this report in its entirety is granted under the condition it is linked to its original source at WhatDoesItMean.Com. Freebase content licensed under CC-BY and GFDL.