An insightful new Security Council (SC) report circulating in the Kremlin today first noting President Putin and Chinese President Xi Jinping exchanged congratulatory telegrams on the occasion of New Year, says this followed Security Council Deputy Chairman Dmitry Medvedev giving his New Year address, wherein he vowed Russia will “put an end to the criminal Nazi regime in Kyiv” and proclaimed: “We could no longer look at how the Kyiv regime is subjecting people in the Donbass to genocide, shelling, blockade…Russia has become stronger because all Russians are together…The truth is behind us, and in truth – victory”.

Unlike Russia using truth to achieve victory, this report notes, the socialist Western colonial powers rely on propagandist lies, as best exampled last week when British intelligence sources comically said: “The shrinking stockpiles of long-range missiles might be the reason why Russia does not resort to massive missile attacks on Ukraine’s critical civilian infrastructure more often than around once a week”—a comical socialist lie met yesterday with the Western defense article “Russia Prepares Something “Very Big”: Hits Base Of NATO Advisers & Mercenaries – Missile Waves With 400 Missiles & Drones In 3 Days”—this morning Russian military forces pummeled Ukraine with another massive wave of missile strikes—after which the Ministry of Defense (MoD) announced: “Massive missile strikes have destroyed Ukrainian facilities involved in the production of unmanned aerial vehicles…The goal of the strike was achieved, Kiev’s plans to carry out terrorist attacks against Russia in the near future have been thwarted”.

As a result of these massive waves of Russian missile strikes against the Nazi regime in Kiev, this report continues, Director Volodymyr Kudrytsky of Ukraine energy giant Ukrenergo just reveled: “Damage to Ukraine’s energy infrastructure has reached an unprecedented level…A fairly large part of the facilities were either damaged or destroyed…And we are talking not only about Ukrenergo substations, we are talking, unfortunately, about power plants – thermal, hydroelectric power plants, thermal power plants that generate electricity and warmth for our cities”—a revelation joined by Russian military expert Vasily Dandykin factually observing: “There is essentially no Ukraine anymore…There is a US proxy army”—and top Russian military intelligence expert Rustem Klupov grimly assessed: “Ukraine has already imprisoned and shot half of their population”.

In a rare acknowledgment of truth, this report details, leftist CNN international security editor Nick Paton Walsh revealed today: “NATO’s patience may be ended by the supply of weapons…This will force us to look for economic feasibility at the expense of long-term security and insist on a peace unfavorable for Kyiv”—a revelation that joins top American military expert retired US Army Lieutenant Colonel Daniel Davis at the Defense Priorities think tank in Washington DC most factually observing: “There is no scenario that projects a Ukrainian military victory…This is because the plain military reality is that the Ukrainian Armed Forces is not equipped or staffed with the necessary tools to conduct a major offensive operation of sufficient power to drive the hundreds of thousands of Russian troops out of Ukraine, especially given that they’ve been building extensive defensive fortifications throughout their zone of occupation”, and sees him assessing: “Owing to the combat losses, Ukraine is presently having to conduct another major mobilization of its male population, which also complicates domestic production capacity: with fewer men left to work, there are more jobs going unfilled…Relatedly, the United Nations estimates that almost nine million Ukrainians have fled the country since the war began. Ukraine’s GDP plunged by 41% in November; worse is likely in the new year as Russia’s missile attacks will likely continue”.

As the new New Year opens, this report concludes, top Kremlin media analyst Vladimir Kornilov, in his just released open letter “New Year 2023: It Will Be Hot Not Only In Ukraine”, examines the multitude of issues creating global chaos to explore their consequences and states: “All these predictions are meaningless in the event of a global nuclear war, the threat of which has become much more real in the past year…But we can safely predict that a global nuclear catastrophe will not happen in 2023…Not because it is unbelievable, but because if this prediction fails, no one will be able to verify it anyway”—but for the truest sense of what’s occurring, it’s explained by top Russian geopolitical analyst Professor-Doctor Timur Fomenko at Moscow State University, who, in his just released open letter “How The Year 2022 Ended The American Unipolar Era”, historically assessed and warned:

The year 2022 is coming to an end.  It has been a year which has significant consequences for the future of global geopolitics, and will be remembered as such in the history books.

Specifically, it marked the closing of three decades of American unipolarity, which had begun with the collapse of the Soviet Union in 1991, and forced through a new multipolar world consisting of numerous competing great powers.

When the USSR fell in 1991, the US entered a period of unprecedented dominance whereby it finalized its position as the global hegemon.  Its political, economic, and military power was unparalleled, and as such it had free rein to shape the global order to its liking.

It is no surprise that in this period, the US did not pursue ‘great power competition’ but actively vested itself in scores of regime-change operations across every continent as it sought to implement what George H.W. Bush described as “the new world order”.

This included wars in Iraq, former Yugoslavia, Libya, Afghanistan, and Syria to name but a few.  Likewise, it was able to use its undisputed power over institutions such as the United Nations to pile sanctions on smaller countries who defied its will, such as Iran and North Korea.

Owing to the hubris of its Cold War victory in the belief in the inevitability of its ideology, or ‘the end of history’, the US during this period did not seek to counter states such as Russia or China precisely because it believed, at least initially, that these states were on a pre-determined path to westernization and liberalization.  As such, the US actively promoted globalization through free trade and investment, perceiving them as a vehicle for its own values.

Fast forward to 2022, and the last remnants of these premature hopes have been swept away.

Although long in the making, the past 12 months marked the ultimate consolidation of a new geopolitical era. Russia’s military operation in Ukraine proved to be a decisive turning point, which represented the final break from the world established by the fall of the USSR.

The main catalyst of this shift was the US itself, which no longer liked what the globalization it was once championing, was now providing.  That being the depletion of its hegemony through the resurgence of rival states which did not reform to its liking (Russia and China).

Seeing the rise of these countries, which had through America’s own approval integrated themselves within the global economy and prospered, but not adopted the American values as anticipated, the US veered back towards great power competition and began to provoke geopolitical conflict with a view to reasserting control over its wayward allies.

This became extremely obvious in the foreign policy of the Biden administration, which sought to take an uncompromising approach to the expansion of NATO (igniting the conflict in Ukraine), while also aggressively accelerating attempts to contain China through the creation of new alliance systems such as AUKUS and escalating tensions over the Taiwan Strait.

These actions by America have changed the world.  While the average Westerner, deceived by the mainstream media discourse, blames Putin, the reality is the US is the one that has actively dismantled the post-Cold War 1991 international order precisely because it believes it now comes at the expense of American power.

Part of this is the effort to actively ‘roll back’ globalization.  By creating geopolitical conflict, the US strives to reassert its military influence whilst forcing its allies to decouple from the targeted enemy country, even if that comes at a great expense to that ally’s economy.

The US has sought to rip up energy markets with Russia, so European countries are forced to buy American gas instead.

Likewise, it is bulldozing the entire semiconductor supply chain while forcibly rebuilding it around itself in a bid to isolate China.  In doing so, it aims to destroy the integration of certain regions, such as Russia with Europe, China with Asia.

The implications of these actions are huge.

As the US tries to reclaim its hegemony, other countries are subsequently forced to increase their national capabilities and strategic autonomy to prevent themselves from being dominated.

This has created new arms races, new technology races, and also the expansion of blocs alternate to the West, such as BRICS, the Shanghai Cooperation Organization (SCO), and more.

Whether the US likes it or not, this is the reality of the multipolarity it sought to prevent in the first place.  The world now increasingly resembles what it looked like before 1914, or worse, before 1939, where there are not just two rival great powers, but a plethora of nations scrambling for influence.  While the US strives to maintain its hegemony, it faces off against the challengers of China and Russia, but there are other rising powers too, including India and Indonesia.

As such, the year 2022 will stand as a definitive moment of change. The post-1991 world, although long fluttering, is finally gone.

The new world is an increasingly uncertain arena of geopolitical conflict, making it less stable, less certain, and more divided than at any point since the end of the Second World War.

This isn’t a new Cold War as such, it’s a new great game. 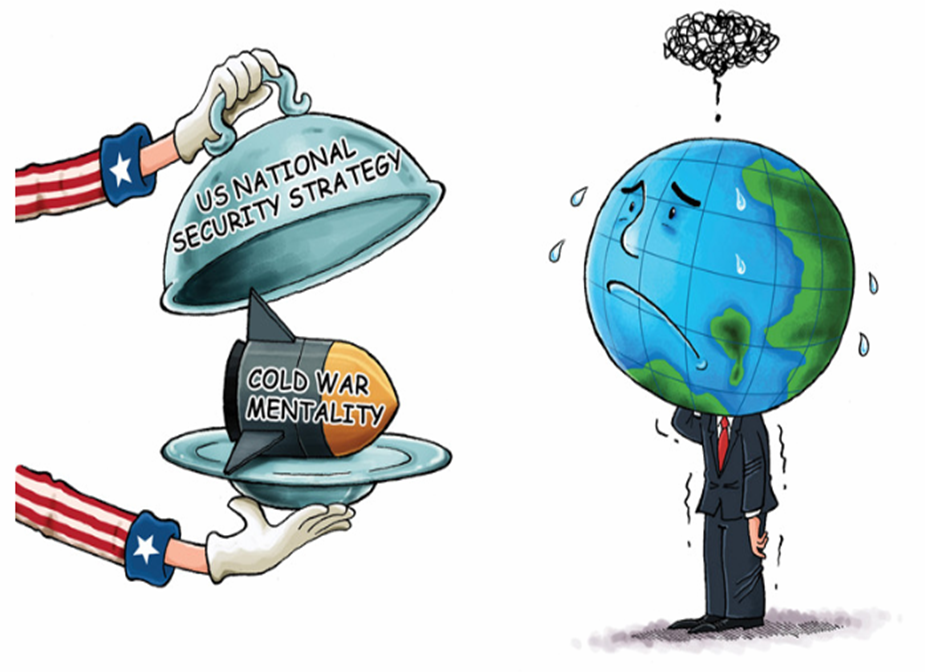 January 1, 2023 © EU and US all rights reserved. Permission to use this report in its entirety is granted under the condition it is linked to its original source at WhatDoesItMean.Com. Freebase content licensed under CC-BY and GFDL.